I'm looking for a story about a youthful (late teens?) female protagonist who begins the story by making an emergency escape from an orbital habitat. The protagonist is actually host to multiple disassociated (as many as seven?) identities, of whom she is initially unaware. They are capable of holding council internally, however.

Another spoiler-free notable story piece is a race of aliens who mark their 'naturally present' personalities/identities with a glyph or character on their bodies before venturing into public spaces.

FTL in this story must be performed by a non-human pilot, while the remainder of the occupants are either put to sleep or in suspended animation (I don't recall), due to eldritch somethings in the great beyond that will drive human pilots mad.

The driving action in the story is the protagonist's flight from corrupt human government groups that brutally experimented on her as a child to deliberately induce disassociated identities in an attempt to yield a viable human FTL pilot. The experiments were in fact successful, and the climactic scene involves the protagonist, now reconciled to her multiple personhood, piloting allies through an FTL jump.

I believe it was written in either in the late nineties or early aughts.

story-identification aliens ftl-drive
Share
Improve this question
edited May 22 '17 at 4:18

You're describing This Alien Shore by C.S. Friedman: 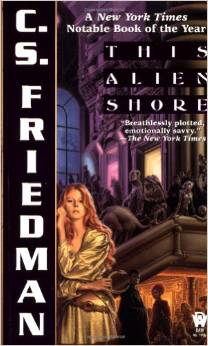 supports a dozen or more personalities, heavily augmented by implanted computers in her brain. She is unaware of this at the beginning of the book.

It's set in a universe full of Variants, mutated children of earth once cast off but now thriving. The various races were connected by the Guild, which has a monopoly on FTL travel - all others who attempt FTL travel fall victim to Sana, the dragons of the ainniq.

to provide the social cues needed for wildly disparate personalities to work together harmoniously. The Guerrans essentially embody what we would call mental illness today, but taken to extremes and allowed to flourish for the gifts that come with those illnesses.

Many resent the Guild's monopoly, none more so than Earth, which has a genetic purity thing which is at odds with essentially the rest of the universe.

There's a major subplot involving hackers sleuthing to find the bad guy; ISTR that C.S. Friedman admits in the afterword to guessing and making up a lot of the technology, she actually captures many aspects of hacker culture, mindset, and motivation quite well.

Read the book, but... beware of dragons breathing red

This Alien Shore by C. S. Friedman.From the book cover Earth's original superluminal drive did genetic damage to those who used it. Jamisia, protected by biological brainwave systems and accompanied by the many voices in her head. Shido is viciously attacked by coroporate raiders, Jamisia flees.When Outships can only be piloted by the Guera's Outspace Guild, whose abilities allow to monopolize galactic transportation

Not the answer you're looking for? Browse other questions tagged story-identification aliens ftl-drive or ask your own question.

14
Book: girl with a prototype computer in her head that allows her brain to be broken into multiple personalities
6
Looking for the title of a book about being stark raving mad to navigate a ship

16
Trying to identify pre-1970s short story involving multiple humans absorbed into an alien blob
13
What novel series has a young boy travelling across space with librarians and a bat-like dog?
4
Searching for novel involving space pilots with multiple arms
5
Story involving a young Merlin
4
Old story about space exploration program with young adult crew
5
Stephen Baxter story about female space explorer competing with an alien
5
Book with sword fighter with multiple personalities, trying to protect someone from people who have come to his village
9
Fantasy story with a young female protagonist and an ageless wizard
9
Book about a female protagonist travelling through space with alien creatures called the Leviathan