When did Batman say “I am Batman” for the first time?

"I am Batman" and its variants like "I am Batman, bitch" are quite popular. Using this, Bruce Wayne has revealed his secret to his girls.

When (and in which comics) did he (Batman; not Bruce) use it to boast his iconic figure for the first time (when everyone already knows who he is)?

Detective Comics Vol 1 #38 (1940) seems to be the first time that he needs to introduce himself (to Robin, incidentally). Prior to that, everyone just seems to know who he is. 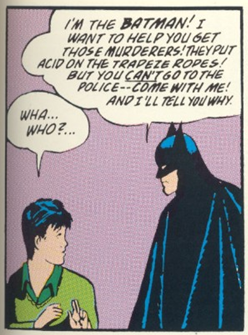 While looking, I found a blog post that attempts to catalog the people who know Batman's true identity. Dick Grayson/Robin was the first to be told, in April 1940 (Detective Comics # 38), but the actual telling was not shown. There is simply a panel with Dick Grayson swearing an oath to Batman to fight crime together.

A likely candidate for the first time the revelation was actually depicted in the comic, is when Batman revealed his identity to Joe Chill, the man who murdered his parents. This was in Batman # 47 from June/July 1948. But as seen in the image, the line was "I am Bruce Wayne". 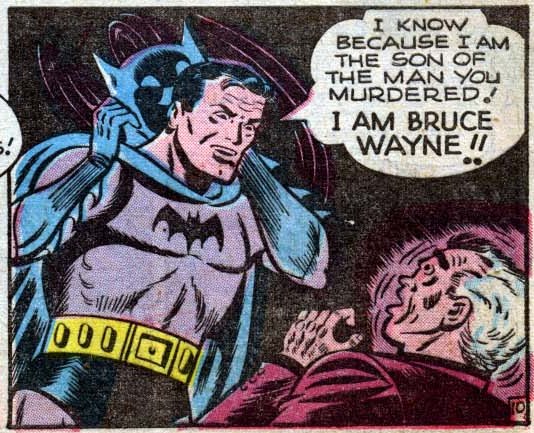 Like many things that are now great about Batman, we have TAS to thank for this.

While Batman has stated his identity many times before, it was never really a catchphrase for him, nor did he say it in a specific, recognizable way that we'd notice today.

The first time he stated this line in a meaningful way was in the TAS episode Nothing to Fear, during a hallucination brought on by the Scarecrow while confronting the fear of his father's disappointment.

Thomas Wayne vision: You are a disgrace!

Batman: No! No! You are not my father! I am not a disgrace! I am vengeance! I am the night! I am BATMAN!

The line was popular enough that it became the tagline for the show's bumper on Cartoon Network.

The pop culture claim to fame of the line seems to be from 'Batman Begins'. The words "I'm Batman" in a hoarse voice (in order to disguise the sound of his actual voice), were first spoken by Christian Bale to his victim hanging upside down.

Since then, it has been spoken by everyone from Sheldon Cooper to the folks at HISHE.

If you're looking for a comic-book reference, I'd refer you to All-Star Batman and Robin, a series by Frank Miller 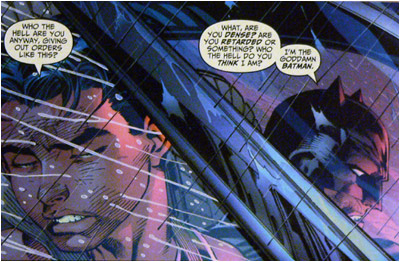 In case the font is small, here's the dialog:

Robin: Who the hell are you anyway, giving out orders like this?

Batman: What, are you dense? Are you retarded or something? Who the hell do you think I am? I’m the Goddamn Batman.

It's not the exact phrase you asked for, nor am I sure if it was the first time he used it, but it was hugely popular and controversial when it came out.

11
Does Batman ever say “Because I'm Batman” in-universe?

13
What was Jim Gordon's original plan and who else was involved in it?
4
When do Batman and Bane first fight?
32
How many people have deduced Batman's secret identity?
3
Has there been a Wayne in the Court of Owls?
7
Was the idea of Batman inspired by vampires?
10
Was this scene of discovery of the Batcave from the comics?
9
How long has Batman been “The World's Greatest Detective”?
8
Does Lex Luthor know Batman's identity?