Is there any plan to expand Arrow/Flash-Verse to include the rest of the Justice League?

Marvel is currently making a killing with their expansive network of movie tie-ins, which I assume is what prompted the Arrow/Flash tie-ins (behind the scenes). DC is also coming up with Dawn of Justice, which sets up at least three more members of the Justice League.

Unfortunately, the Arrow-Verse has been heavily modified to not have any meta-humans (with the exception of the Flash, which is treated as unusual). This actually works out pretty well given its format (TV shows with supernatural effects tend to suffer from poor special effects, and although by now the Arrow-Verse probably has the budget for it, it was a wise move not to start that way).

There is obvious incentive to tie these together at some point, but it seems unlikely given the ground rules established in the first two seasons of Arrow. Superman and Wonder Woman would clearly bend the no-supernatural rule, while Green Lantern (John Stewart FTW) and the Martian Man-Hunter would break it completely.

TL;DR is there any plan to expand the Arrow-Verse to include the rest of the Justice League? Will it tie in with the new Dawn of Justice movie, or will that be a simultaneous, but separate, franchise?

The Man of Steel/Justice League movies are a separate universe from the TV shows. Arrow and The Flash share a universe, which is separate from the other DC-derived shows that are on the air (i.e. Gotham, Constantine, etc.). There are rumors of a Supergirl TV series that will join the Arrow/Flash-verse though.

So eventually we may see other shows added to this Arrow/Flash-verse that will build up to a Justice League-style team, but nothing officially announced yet. And they won't be merged with the movies any time soon, especially since they've cast a Flash for the films, and it's not Grant Gustin.

Unfortunately, the Arrow-verse has been heavily modified to not have any meta-humans (with the exception of the Flash, which is treated as unusual). This actually works out pretty well given it's format (TV shows with supernatural effects tend to suffer from poor special effects, though by now the Arrow-Verse probably has the budget for it, it was a wise move not to start that way)

This isn't necessarily true. In The Flash there are many meta-humans, as the accident that gave the Flash his powers affected many people in the city. After the success of this week's crossover episodes, Marc Guggenheim said:

One thing that you were clear about at the start of "Arrow" season three was, now that "The Flash" existed as its own show, superpowers were going to be contained there and "Arrow" would return to more grounded territory. Was it fun to step outside of that for an episode, and indulge a little bit more in the fantastic?

Guggenheim: Yeah, it really was, actually. And I have to say, what's fun about episode 8 for "Arrow" is, it proved to me as a writer and a producer, "Hey, you know what?" You can do metahumans on "Arrow" without feeling like the show is changing its tone too much.

So we may see more of that?

Guggenheim: You may. It's something that we all sort of collectively realized: "Hey, the show can handle that." So that's kind of cool. I may have to amend my earlier comment from the beginning of the year, just because this kind of works!

In the present Arrowverse, they have their own Justice League which consists of 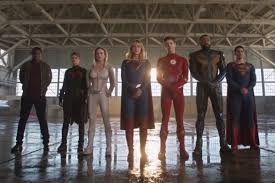 This Justice League was formed after the events of Crisis on Infinite Earths when the Earths of the different shows were combined to form a single Earth-Prime.

Currently, the shows which are part of the Arrowverse are:

and some others are Vixen, Freedom Fighters which are animated series on CW seed and the half-completed series Constantine of which the main character has been included in Legends of Tomorrow.

Also, in Crisis of Infinite Earths they teased new shows of Stargirl and Superman(Tyler Hoechlin version). And also the cameo of Ezra Miller's DCEU Flash connected arrowverse to DCEU. Thus, the Arrowverse has grown far and wide and has its own Justice League and we will see them in action in the future.

In my opinion answer would be almost definitely yes. TV shows and Movies don't share universe (which is good), there will be expanding of "TV universe".

Vixen already aired 6 short episodes of 5 minutes which share universe with Arrow and Flash. Al tho it is animated series Arrow and Flash do appear and Stephen Amell and Grant Gustin gave their voices to thair characters respectful.

Also if you open Arrow Verse wiki you will see pictures of characters on the sides (on left Arrow, Vixen and Constantine and on right Flash and Captain Cold) this means that these characters are sharing wiki and they all exist in same universe.

In s4 Arrow trailer it looks like Constantine had cameo for brief moment so it is possible that he will appear in Arrow and even get his own s2.

If you watched Arrow s4e1 there is a scene in bar where meting of Oliver Queen and head of A.R.G.U.S Amanda Waller was held. On opening shot camera passes man in pilot leather jacket with USA flag on shoulder and JORDAN as name-tag, this might mean that Green Lantern could at least appear in Arrow (an I hope get his own show).

I also always imagined that Gotham will one day become Batman series and that it would share universe with Flash and Arrow but that's just mine opinion and wishes.

In conclusion one day it is possible that we will have Justice League on TV, and that that day will be absolute best.

Not the answer you're looking for? Browse other questions tagged dc the-flash-2014 justice-league arrow arrowverse or ask your own question.

24
Is Gotham intended to be in the same universe as other DC/WB TV properties?
2
DC Transmedia Universe: are Man of Steel and Arrow part of the same cinematic universe?

24
Is Gotham intended to be in the same universe as other DC/WB TV properties?
5
How was the Arrow able to help the Flash?
12
What were the votes for Hawkgirl to remain in the Justice League?
0
Why is Barry so slow to catch the arrow in the Arrow/Flash advert?
6
Can a power ring leave a wielder?
12
Why does Green Lantern call Supergirl "Shayera"?
11
How is the audience of the Arrowverse spread amongst the 4 shows?
5
Is Superman more powerful than the Greek gods?
4
Which Green Lantern characters appear in war with Darkseid?
10
Are superbeings a reality in 2022's "The Batman" universe?