Is there significance to the way the White Walkers/Others arrange dismembered body parts in patterns? [duplicate]

I just started watching Game of Thrones again and noticed something that I had never noticed previously. In the very first episode of the first series during the opening segment (just before the title sequence), there is a scene where one of the Rangers (in the books I think it is Gared) comes across a collection of the dismembered body parts from slaughtered Wildlings. The scene shifts to an aerial shot and it appears that those body parts are arranged in a crude circle with a line through the centre.

After noticing this it made me also recall that in a later episode there is a similar scene where severed horses heads and bodies are arranged in a pattern (I can't remember exactly but it was something like a spiral arrangement).

Are there any known reasons for White Walkers to arrange body parts in these geometric patterns? I certainly cannot recall anything mentioned in the TV series itself but I wonder if perhaps in any interviews with the TV show creators it is mentioned/explained? I thought it might simply be to create an additional sense of unease around the scenes and to perhaps enhance the sinister nature of the White Walkers but that is pure speculation on my part. I can't recall this behaviour mentioned anywhere within the books so the question applies just to the TV series.

This discussion had a few useful insights.

These scenes let us know something about the white walkers, EG:

it really hammers home the idea of the White Walkers as another intelligent species, and not just mindless monsters.

I think it's a bit creepy that the WWs would do things we simply have no rational explanation for, because it reinforces (forgive the pun) the "otherness" about them - they're not us.

Also there is the more pragmatic explanation, this allows the medium to show (not tell) the viewer the WW's did this:

By giving a certain amount of artistic flair to their "work," the viewer knows easily when someone has been killed by the Others, versus a normal conflict leading to loss of life.

If you have been watching the Season 6, in the episode 5, you see a similar symbol around the Godswood Tree, where the Children of the Forest turn the man into the First White Walker.

Refer to the image below: 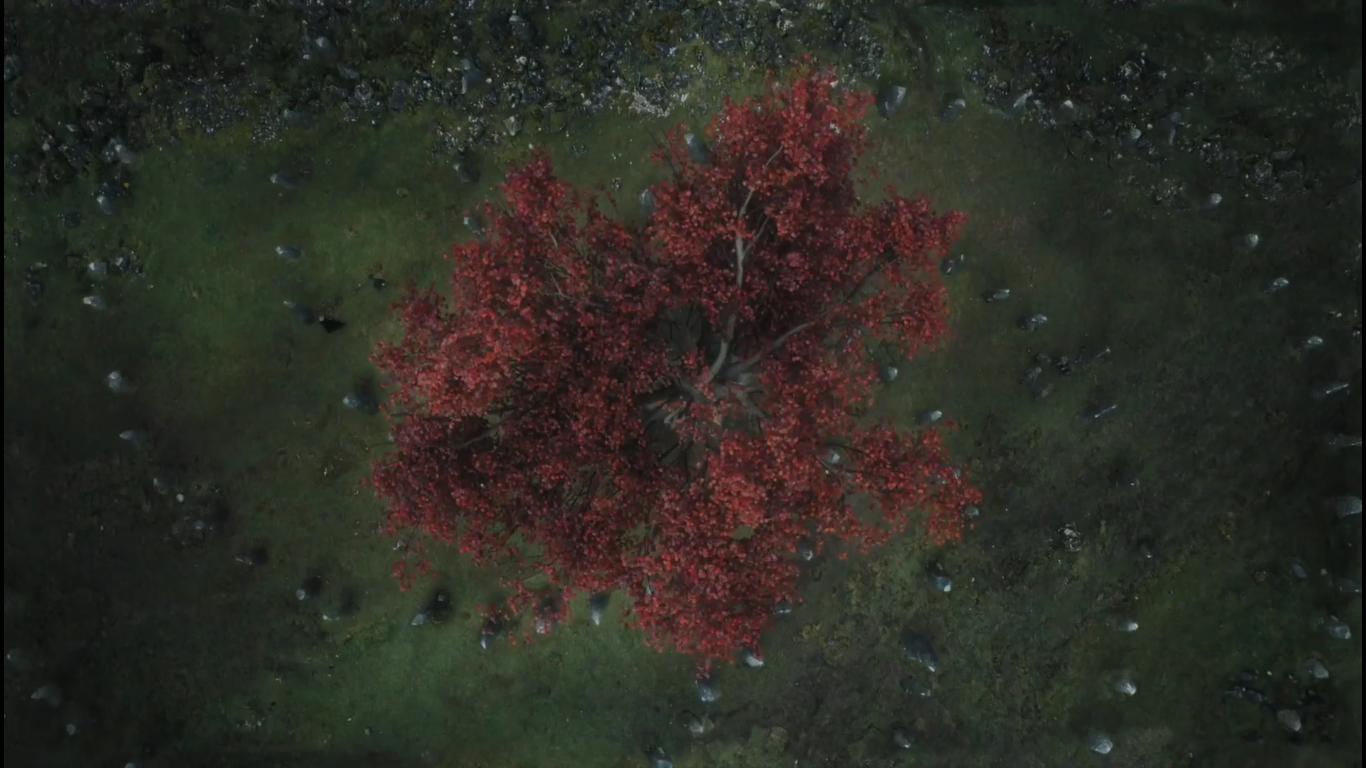 It wasn't explained yet to my knowledge, but I came up with these viable theories:

It is probably some sort of rune or symbol that has some meaning to them. Like celtic runes, I mean the "time" that GOT is set in makes it a magicy era.

But these fans appear to have some interesting chit chat about it.

What do we think about the Others arranging the wildlings' body parts into that pattern? It's suitably creepy, but does it have any particular significance?

I think it was a replacement to the buildup around how strange it was that the wildlings were gone. Just gone. they talk about it a fair bit in the book, no? Strange necromancy ritual formation is a pretty quick way to explain that this situation is abnormal.

From Reddit: Why would the White Walkers take the time to do something like this? Is there a symbol or purpose I don't understand? [Semi-NSFW for mild gore]

I think it serves to A. show the wildlings aren't the most savage/dangerous thing north of the wall and B. show this wasn't done by wildlife (wolves). It introduces the watcher to the actual threat to the realm and that it is, contrary to the opinions of most, very real.

The other discussions are equally as interesting, but I think we can agree that the symbols are based on magic, as I don't remember footprints.

It is probably a part of whatever magic the Others are a part of. They obviously have magic and these are magical markers that show: 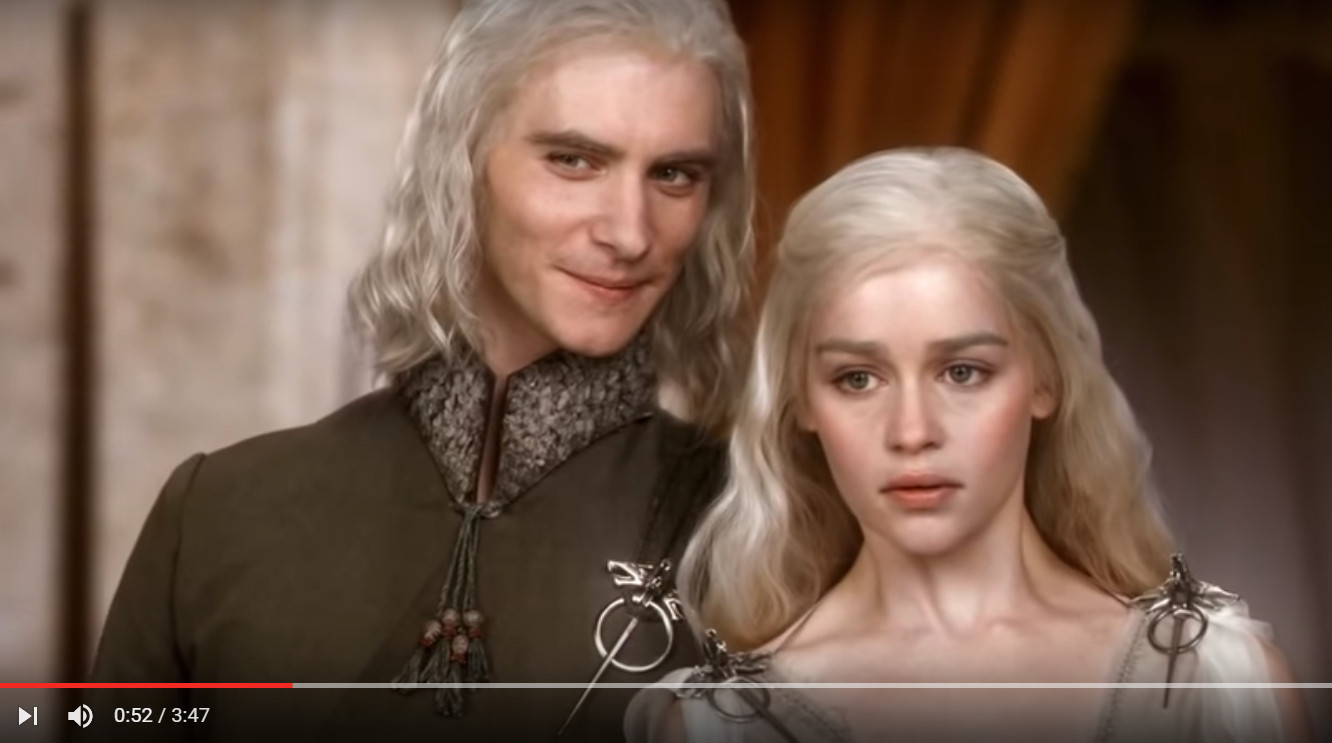 I remember noticing that symbol too and kept a look out for it in the 1st season.

You can see the Hand of the King badge is the same in a way; also in the 1st episode Dany's dress has similar pins on either shoulder with three dragon heads on top, and her brother has the same. I have a feeling that symbol might be related to the Targaryens, and that their blood line are the only ones able to stop the white walkers.

I am not sure of the exact meaning. I remember that Sam and two other Nights Watch brothers uncovered an ancient rock that had dragon glass weapons hidden underneath. I believe there were some very old patterns carved on the rock that were similar to the large spiral pattern that was seen in Season 3. Didn't Sam say that the dragon glass was left by the first men? Could it be that these patterns were a means of communication several thousand years ago, similar to petroglyphs that we find in ancient ruins?

The circle of bodies almost had the appearance of a compass with the line in the center being mostly on the bottom (south), possibly signifying that the white walkers are moving further toward the wall. I may be over thinking this, but it makes sense. I came here to see if anyone else had this thought.

The answer is this: the white walkers are starting a war with man because men created an imbalance through magic/dragons/etc. (Specifically dragons)

The spiral of horse heads symbolizes the swarm of Dothraki surrounding Dany at the end of season 5. Both had a Targaryen in the middle. Horse heads with Jon (Targaryen) standing center, and Dothraki with Dany standing center.

As we know Starks can warg, and have greensight (see the future), Starks share some blood with the walkers, and the further north you go the more powerful these abilities are. White walkers know what's coming and it's meant as a warning to the impending doom the citizens of Westeros are creating for themselves

In the end it will be revealed as white walkers aren't as bad as they're made out to be, a recurring theme in GoT. Just like Jaime: we all hated him and now love him.

Apparently many of these were subtle hints that the Children of the Forrest created The Others. According to D&D (showrunners). The Targaryen connection has me pondering more though. Plus John emerging from the beneath the crowd in The Battle of the Bastards was very reminiscent of Daenyrs' Mhysa moment.

Here are some pics and direct links:

Swirl pattern reminds me of symbols for infinity or chaos. The circular patter. Order direction think two dimensional astrolabe/gyroscope. Meaning is larger than show itself. Backstory is something about nature/cycles which explain the unusual seasons. I think the real war is to influence some phenomenon affecting catastrophic natural events. Flood, mini ice age, volcanism doom of old valaryia. Ect

14
What was the meaning of the Night King's message?