I am trying to remember the title of a children's SF book I once read, maybe 20 to 25 odd years ago.

I don't have a great number of details (and some of what I recall may be completely wrong), but the details (such as they are):

The book I read was Strange Hiding Place #1: Hard Drive by Graham Marks 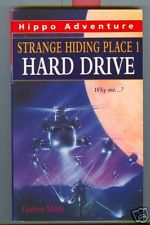 This was the first book in a trilogy (Originally published in 1995/6 by Scholastic as a trilogy (Hard Drive, System Crash and Download) that was later re-written and abridged into a single book simply called Strange Hiding Place

Review copy from the author's site:

Eleven years ago the Tylurians, an alien race, hid something on Earth in a very strange place. Now they need it back. Only they need to find it first. The TylurianŌĆÖs secret is so terrible that it would mean the annihilation of their arch-enemy the Vad-Raatch. The Vads will do anything to stop the recovery of this secret, and thanks to a well-placed spy, they are very close. The Tylurians have Dez, an eleven year-old earthling.

Strange Hiding Place is first-rate science-fiction. The action is non-stop. Graham Marks describes phenomenal aerial and space combats as well as a gritty street-fight in Nigeria and urban warfare in New York. Wherever Dez and the Tylurian Yakob go there is fear of subterfuge. People are not always what they appear, and sometimes Dez cannot even trust what he hears! The science is fantastically futuristic. Yakob travels around in a biologically engineered bio-syntonic intelligence that can morph from car to plane to space ship as well as warp in time. Amusingly Dez calls her Bess. She can cloak and display a sophisticated surveillance array as well as worm out intelligence from computer systems.

The characters Dez and Yakob are central to the story. They are in many ways both homeless. DezŌĆÖs parents are dead and Yakob is 300,000 light-years from home. This shared circumstance becomes a realistic basis for their friendship. It also gains the readerŌĆÖs sympathy. Consequently there are moments of genuine sadness and cause for concern. As the story progresses, Graham Marks perfectly balances DezŌĆÖs change from teenage sloth to galactic hero without diminishing the underlying pain of his circumstances. Strange Hiding Place is a highly entertaining and recommended read for children aged 10 years plus. Be prepared for a surprising twist at the end!ŌĆÖ ŌĆō WriteAway

ŌĆśAn adopted 11-year-old boy and girl and a Jack Russell dog are the unwitting carriers of the code to end a war between two alien groups, which could easily bring about the destruction of a planet. Whilst the two factions struggle to gain access to the DNA of this unfortunate trio, they are subject to terrible dangers and barely escape fatality innumerable times. ItŌĆÖs very exciting stuff!

6
Book about a teenager and alien

6
Children's play with a blue alien named 'Zeeto'?
5
Pre-1979 hard sci-fi children's or YA book with boxy functional spaceships
7
70s (or earlier) children's sci-fi novel with tiny intelligent gemstones falling from the sky, a kid forms a mental connection with them
9
Looking for an anthology book containing a story about an alien named Ineed by a little girl
4
70's/80's children's book with a magic paint brush
5
1990s children's book with environmental message about a child flying in his bed