In "Secrets", episode 6 of season 2 of The Walking Dead, Maggie and Glenn had been in the pharmacy for a few minutes. Maggie then walks to the back of the store and starts rummaging through the racks of medicines.

Suddenly, and without warning, a walker grabs her hand from the other side of the shelves. 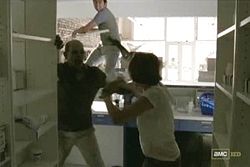 In every other instance that I recall, the Walkers reacted immediately upon sensing living prey by moaning and walking/shuffling/crawling towards them. Yet this did not seem to happen in this case.

We've seen evidence that most Walkers can smell living humans from several feet away (identifying Glenn and Rick as living after rain started to wash away the stench of the Walker organs they covered themselves with), and there have been numerous examples of Walkers responding to sounds and visual stimulus (while they don't seem to be able to tell a human from a Walker on sight without other cues such as odor, countless Walkers have demonstrated the ability to perceive, and react to, motion at varying distances).

Setting aside dramatic license, was this Walker waiting quietly until Maggie got within reach? I suppose it is possible that it somehow didn't realize they were there until Maggie was in reach, but I didn't see any indication that the Walker's senses were in any way inhibited. There was no obvious sounds of moaning, or boxes and furniture being knocked over as it heading straight towards its prey as we might expect based upon behavior seen from other Walkers.

Are there precedents for ambush behavior in The Walking Dead universe? Or are there precedents that show that Walkers don't always behave the way I described, and the appearance of intentional ambush may be coincidental and simply normal Walker behavior?

After doing some heavy comic book reading research, there are numerous instances of what the survivors call "lurkers." Some key examples:

As to whether or not they're actually engaging in ambush tactics or not, it's not really conclusive. I would say, actually, that the fact that zombies typically make noise when attacking is actually strong evidence for a lack of tactics - it gives away their position immediately. What there is, however, is evidence of that same type of behavior in the comic - it is by no means unique to the show.

There is no evidence that zombies have enough intelligence left to plan and execute an ambush. As you've noted, everything they've done in the show so far has been reactionary.

In episode 1x06 (TS-19), Jenner explains that when a person comes back from death, their brain is not totally functional. Only the brain stem is active - the resurrection brings back "just a shell, driven by mindless instinct."

Onto this particular incident, it doesn't look like an ambush at all. Placing yourself and your victim between not one, but two shelves does not look like a sound ambush strategy:

It's possible that the zombie was sleeping (and therefore hidden from view, but in close proximity) and reacted to the noise and smell. Something similar happened in the very first episode, when Rick gets in the tank and the zombie doesn't react until Rick tries to pull out his gun.

This could explain why Maggie didn't notice anything until the zombie grabbed her.

At least in the comics there's no evidence of this sort of behavior. The dead don't seem to plan at all, just react.

Not the answer you're looking for? Browse other questions tagged comics zombie the-walking-dead or ask your own question.

15
How do “pet” Walkers help ward off other Walkers?
6
Does a Walker's senses diminish with time?
6
How durable are the Walkers in “The Walking Dead?”
4
Defending against Walkers
14
What kept the Walkers away from Hershel's farm in TWD?
23
Why not escape the walkers on an island?
0
Do the walkers that get killed by a blow to the head reanimate again?
4
Why did Lizzie think the walkers were still human?