Where does Captain America get his bulk from?

In both the movies and comics Cap gains his peak human strength via the supersoldier serum and a does of vita rays, resulting in the rapid development of his super buff body: 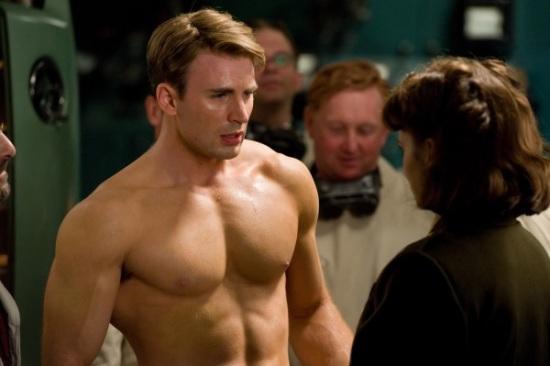 While the most obvious real world analogue would be the use of steroids, these would still require that the person taking them train extensively and significantly increase their protein intake in order to gain muscle mass. While there are frequent scenes of Steve training in both mediums I've yet to see any scenes of him eating a 12-egg omelette or downing protein shakes. Are there any in-world explanations that would account for the increased muscle mass? Extra-dimensional energy conversion?

CAVEAT: I'm going to use the movies as reference, because I haven't read the comics. Feel free to fill in with canon.

For his initial bulking up, we can assume the machine provided him with the extra mass. This avoids the Bruce Banner / Hulk problem.

For maintenance, Captain America's metabolism has been altered in who knows what way, and it's much faster. Also, he has some sort of super-liver because he can't get drunk.

Steve Rogers: Dr. Erskine said that the serum wouldn't just effect my muscles, it would effect my cells. Create a protective system of regeneration and healing. Which means, um, I can't get drunk. Did you know that?

Peggy Carter: Your metabolism burns four times faster than the average person. He thought it could be one of the side effects.

Cap probably does need to eat more, but his altered metabolism might allow his body to transform food more efficiently. Normal people get fat from eating the wrong foods because of the way our metabolism works due to millions of years of evolution optimized for food scarcity. Normal people need to work out to gain muscle because again, evolution has optimized us to be efficient with our calories. Don't use those muscles? Don't put the calories into maintaining them. Cap's body has been altered and it's Stark, not evolution, who's in charge now.

Our bodies can already manufacture most of the vitamins and proteins we need, it's only certain ones we need to ingest. Perhaps Cap doesn't even need those anymore and can scarf mineral enriched candy bars all day knowing his body will use the minerals and sugars to turn it into anything he needs.

I think we don't see Cap eating a ton of food (do we ever see him eating?) because it doesn't fit the movie's tone. Most superhero films have an early scene showing a mundane down side to their powers and it's usually a bit goofy. The Flash usually gets a scene where he's stuffing his face. Steve Rogers is presented with more dignity. The "I can't get drunk" scene is his equivalent to The Flash emptying the fridge.

The Abridged Script from The Editing Room hits the nail right on the head.

Yes sir. I'm willing to spend hours at the gym, eat a ton of that disgusting weight gain powder, and work my ass off if that's what it takes!

Ha ha, zilly boy! Ve have drugs for you!

Wait, the Marvel superhero meant to most perfectly embody the American ideal got his powers not from hard work, not even from luck, but from cheating by using what are basically blue steroids?

My current theory is that the super soldier serum and vita rays bestowed him with a hyper-efficient metabolism and healing ability. This enables him to actually eat himself (in the form of creamsicles), ingesting the calories whilst simultaneously healing from the self-inflicted injuries; in effect creating an autophagic self-sustaining calorific feedback loop: 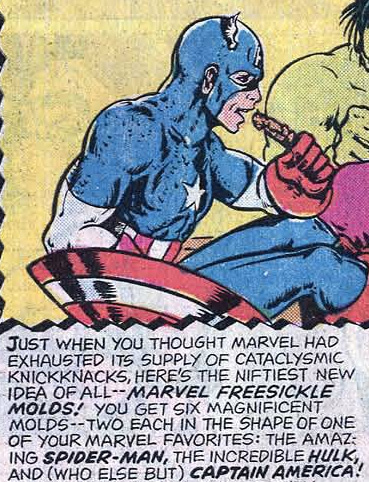 Cap downing several raw eggs in a glass Rocky style after doing one arm pushups and reading the paper lol is it possible he got this from watchimg Rocky after being defrosted??? 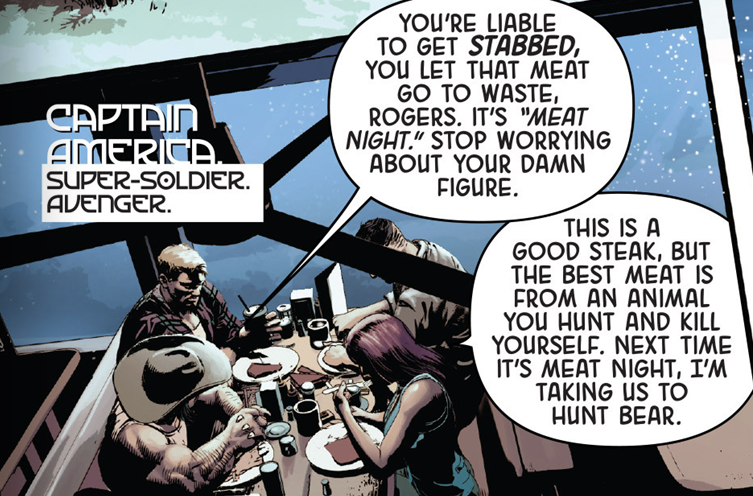 There is another part where they go back for meat night and Cap says hes stuffed and has to get up at 5 a.m. to run just to burn it off, then wolverine says "when do you not get up at 5 a.m. just to run" which leads me to believe in oeace time he adheres to a strict regimen of morning training and good diet. I have scene in the comics of him training with weights, hitting the heavy bag and a custom made gymnastic gym but with bars in all crazy direction