Short story about soldiers time-traveling to the US Civil War & facing an ethical dilemma : Should they intervene?

I read this story in the 1960's or 1970's. A platoon of modern soldiers accidentally time travel into the midst of a crucial civil war battle. They have their modern weapons in their possession. They struggle with the ethical question, to intervene or not? I cannot remember the title or the author.

This is the short story "The Chronicle of the 656th" by George Byram. You can find it in the short story collection "The Fantastic Civil War" edited by Frank McSherry and S.M. Stirling of which I have a copy.

The story concerns the US Army's 656th RCT, on manoeuvres in Tennessee, in WW2. As I recall, they're equipped with mules. They are accidentally sent back in time by the undisclosed "first" nuclear bomb test made by the U.S. government. After scouts are sent out when firing is heard, and there are a number of incidents, the officers and men find that they are somehow back in the US Civil War. They're faced with the decision of what their next course of action is to be. The platoon is made of up men descended from both sides of the Civil War conflict. Hence, tensions rise as they realize they are in a position to swing the results of the Civil War one way or another.

I do no have a subscription so cannot verify. However, from what I understand, should you desire a slightly more "risqué" viewing, apparently there is also an online copy available in the March 1968 issue of Playboy (the first printing), and is available at the "Playboy Cover to Cover" site. WARNING -adult content... 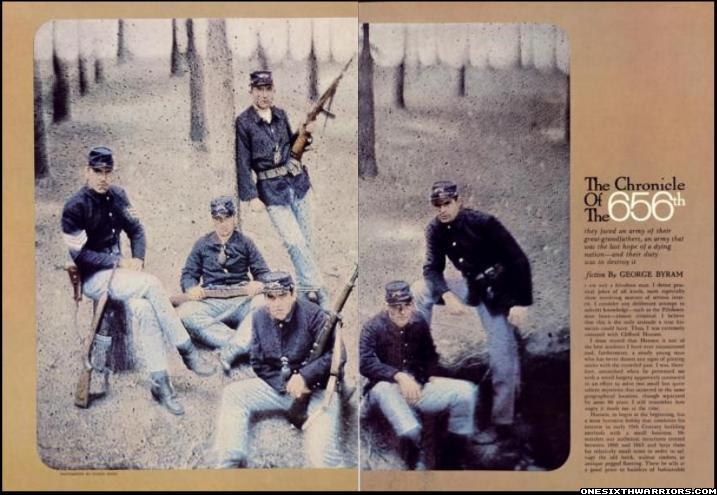