Why do consoles explode in "Star Trek"?

In Star Trek (an indeed many/most other sci-fi shows), a reoccurring theme is the exploding console, usually ones placed behind consoles where squishy human-folk sit. 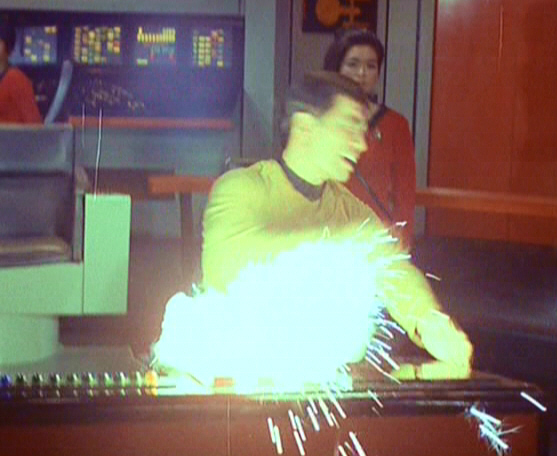 Such explosions often result in casualties, or at the very least, lots of sparks flying all over the place.

This may simply be a trope, but are there any in-universe explanations for why consoles are so susceptible to overloads, even to the point that they cause causalities?

I've removed references to plasma conduits because it was causing some confusion as to what my question was about (though I think I'm the one confused). I recall some instances where conduits exploded behind consoles, causing fatalities, but I cannot cite specific episodes.

There's no need for in-universe explanation, since this is apparently an actual plausible real scenario (as in, an explanation relies on physics and technology as it is, and not something invented specially for Star Trek).

From this The Trek BBS thread (the poster manufactures insulator devices, so he knows of what he speaketh):

What you are seeing when a console explodes is the failure of the insulators and surge protectors. Just like the product I work with, Starfleet Issue Protective Isolators would have a maximum rating.

During combat, lets face it... both sides are slinging massive amounts of power around trying to make the opposing side explode. Eventually one or more isolators are going to be overwhelmed and an arc is going to jump between the power-carrying components of the ship and the frame... and all that power has to go somewhere.

Sometimes it dissipates harmlessly, other times it causes things to fail catastrophically. Frankly given the power levels we are talking about I'm surprised there aren't more internal explosions.

It's possible that when you see consoles exploding, the ship has sustained damage in such a way that its built-in overcurrent protection are of no use.

For example, if the EPS is overloaded to such an extent that the instantaneous voltage is beyond the fuses' rated voltage, or if the power surge is beyond the breaking capacity of the fuses. Or the overcurrent could be so extreme that it damages the console equipment before the fuse/breakers are able to open the circuit.

It's also possible that the ship is hit with an energy weapon which itself causes localized equipment explosions. For instance, an EMP can induce spontaneous overcurrents and overvoltages in electrical equipment, regardless of any fuses or breakers you have in place. So even if you shut off/unplug your electrical equipment, and its circuits are open, the equipment can still be damaged.

Also, the explosions themselves are probably not caused by plasma conduits exploding. It's true that the EPS siphons some warp plasma from the warp core to power the rest of the ship, but this power is mostly distributed through EPS taps located throughout the ship, converting the warp plasma into regular electricity of the right current and voltage for the equipment drawing power from it.

Looking through the beginnings of the original Star Trek series (TOS), you'll find that their consoles didn't explode. As far as I know, the first time we see a similar effect is in the Kobayashi Maru scenario presented in The Wrath of Khan (the second movie) - a training simulation. Basically, to show damage, the consoles sparked a bit, and the officer pretended to be dead.

Over time, this started being a part of normal battles - most likely due to the fact that so many different writers collaborated on Star Trek over the years. This peaked in the suggestion that the explosion is caused by overloaded plasma conduits - what kind of engineer would run a high energy plasma conduit through a control console is a question for the reader, of course.

This also has the effect of showing visible damage even while the ship still has its shields online - which of course adds in drama. In fact, in most battles, the only thing that's really happening is consoles exploding - possibly to save on effects budget (or screenwriting budget :P).

I think they explode to illustrate the presence of danger. It would not be very exciting if a battle sequence would go by as the captain and the rest of the bridge would sit comfortably, with only an occasional shake of the hull to threaten them.

If you want an explanation, you can always make one up. I like to think that the software systems they use are so advanced and so good at lightning fast calculations they require lots of processing power, and whenever the ship is struck by a particle weapon, some of that is distributed through the ship's power grid, and advanced components in the consoles explode sometimes due to power surges.

TOS was produced in the 1960s, so the writing and production staff could only draw upon the science, technology, and experience of that time period for inspiration.

Consider a house of the time equipped/furnished with modern amenities like stereos and TVs that gets struck by lightning, where the bolt finds its way into the electrical wiring. Every plugged in appliance will experience the surge. Light bulbs may explode (with an accompanying shower of sparks), as might TVs and stereos.

Fast forward to the imagined future where opposing ships fire upon each other with energy weapons. That energy may behave like the lightning bolt and travel through the ship's power system and affect points of vulnerability such as control consoles. Of course it's not just enemy fire; encounters with natural phenomena could do the same thing (e.g. one of TOS's earliest episodes "Where No Man Has Gone Before" attempting to traverse the "energy barrier" at the edge of our galaxy). From a scriptwriting point of view, it builds on a familiar precedent to step up the drama, and as pointed out in another answer, offer a way to selectively injure or kill a character.

We're a little more sophisticated these days and think about protecting our electronics with surge suppressors to mitigate lightning damage. We also assume that spacecraft of the future will be designed with measures to protect against such hazards. You can see a corresponding change in the Star Trek series... it happened a lot in TOS, much less often in TNG and onward; where it does happen in the later shows, it is to emphasize just how dire and extreme a situation has become.

Out of universe, it's a simple plot mechanism to injure/kill specific characters during a battle without destroying the entire ship.

There are only so many ways that you can kill people off in a space battle. You could of course blow off a section of the ship, with emergency force fields kicking in to prevent the rest of the ship from collapsing. However, this won't let you cherry-pick targets who are in close physical proximity - if you blow off the bridge, you lose everyone inside.

Alternatively you can send boarding parties to kill off specific characters. This has its own constraints with respect to the plot. For example, it doesn't make sense for an enemy to board a ship if their intention is to completely destroy it.

All three of these mechanisms are used extensively to kill off crew members without destroying the entire vessel (and occasionally some more exotic methods). For many plot purposes, the exploding console is simply the best option.

I realise this is an old one, but I wanted to add my own explanation. I can't remember where I heard this and I'm 99% sure I didn't come up with it.

On older ships, there were lots of explosions and people dying from random electricity and plasma leaks. With the need for a console to be connected to the ship's power systems, and the ship dealing with power in such enormous quantities, it was bound to happen, especially when in combat.

Until those famed Starfleet engineers came up with a console completely separated from the rest of the ship's systems, powered by wireless energy and connected via wireless data. Designs were updated, and the first class of starship with 100% safe console was launched.

The result? Losses in combat increased by 500%. The ships' designs were superior to the last generation, and the internal systems were more stable due to the new console design, so why the sudden massive drop in effectiveness?

After some research the boffins in engineering worked out where the issue was, PEBKAC. A common problem engineers and programmers come across.

Problem Exists Between Keyboard And Chair.

When the crew were less likely to die from performing their console bashing, they were much less motivated to ensure that their work was done well. If doing your typing badly resulted in nothing more than a poor performance review, you would not be as motivated as someone who would face the console exploding in their face and killing them.

Imagine the new ships, all the crew sat around in a nice quiet room, silently tapping away at their new fancy displays, not a care in the world. Meanwhile outside half a dozen Klingon battle cruisers were firing disruptors at them. Nobody knew what utter danger they were in until the ship exploded and they were all dead.

So Starfleet put the old consoles back. The poor red shirts started dying off again in huge numbers, but ships were surviving battle situations much more frequently.

I suspect we could improve the stats on road traffic accidents in a similar way if we attached sharp spikes to steering wheels.

13
Why whenever ANYTHING gets hit in the Power Rangers do sparks fly?
4
Why don't corridors have any safety features in Star Trek?
11
Did bridge consoles explode in TOS?

35
Why was the word "Trek" used in Star Trek?
6
Star Trek TNG - Cargo bay functions separated between different consoles?
11
Why did the Yridian destroyer explode?
15
Why did Ceti Alpha VI explode?
50
Who invented Star Trek sideburns and why?
11
Did bridge consoles explode in TOS?
5
Is there a precedent for the use of this trope in Star Trek?
10
Why do the drones explode?
10
Are clinical trials done in the Star Trek universe?