I've been looking for this series for a long time. The premise is there is this teenager who has supernatural abilities and he is persued by the Devil. Apparently the boy is some kind of gatekeeper in an ancient line and the Devil needs him to unlock the gate between earth and hell? The Devil can take over people's bodies and possesses the boy's friends to try and trick him. I don't remember a lot of the plot except small parts, like when he first learns of his ability he jumps like 100 feet into the air on a trampoline, or he goes for a run and ends up in the next town without realizing it. I think the Devil eventually enters his body when he has sex with a girl because you have to give the Devil consent to enter your body.

In The Gate Thief by Orson Scott Card, the second book of his Mither Mage series. Danny North has unusual powers. His family made up of beings that were once known as Odin and Thor and other "gods" His ability to open the locked gates between worlds; A Great Gate Keeper. There is the scene in the book of him running and ending up in the next town and the evil entity possessing one of his female friends having sex with him to steal his power and get into him, if I remember correctly. 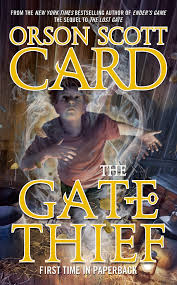 Might it be the Gatekeepers series (also known as The Power of Five)?

There are five books in the series: Raven's Gate, Evil Star, Nightrise, Necropolis, and Oblivion.

The series focuses on five children: Matthew Freeman, Pedro, Scott Tyler, Jamie Tyler, and Scarlett Adams, a group of fifteen-year-old children (all five children turn fifteen in Necropolis) who are destined to defeat mystical entities known only as "the Old Ones" who ruled for a long period of time ten thousand years ago. Matt is the appointed leader. The Gatekeepers won in the past through allowing Sapling, the third Gatekeeper, to sacrifice himself; and upon Sapling's death, his future incarnation, Jamie Tyler, was sent into the past to reunite all the Gatekeepers and repair their strength to defeat the Old Ones. The Gatekeepers also won because the Old Ones do not understand Scarlett Adams' powers, and because they thought Inti, the second gatekeeper, wouldn't be able to make it to the battle as he was on the other side of the world (Inti goes through one of the twenty-five doorways for the five scattered across the world to make it on time). In the present day the Gatekeepers have been reincarnated as modern day teenagers because the Old Ones are about to escape the world they were sent to and rule over humanity a second time. The books focus on the modern day children trying to defeat the Old Ones again.

Bit of a longshot there. :P