Did Panaka know who Padme really was?

In Episode I, we see Panaka very concerned about landing on Tatooine, because the planet is controlled by the Hutts...

Later, when Qui-Gon is heading to the city, Panaka insists that he takes Padme with him. It would be very strange if he actually knew that:

Padme was actually the Queen.. :)

But in Episode II, Padme's new bodyguard, Cap. Typho, knows about her decoy... Which led me thinking if Panaka did know it either before she revealed it... If he did, wasn't it very strange that he insisted that she went with Qui-Gon to explore an unknow planet?

According to The New Essential Guide To Characters, yes, he knew.

The whole idea of using a double was his to begin with.

Panaka was appointed head of security in Magneta's stead; one of Queen Amidala's first acts as regent. Panaka took the death of Veruna particularly hard, and he felt the late King's death was his fault. To ensure this never happened again, he developed an elaborate security setup, which involved using the Queen's handmaidens as decoys. The ploy saved the life of Amidala more than once.

Panaka states that it is the Queen that has commanded (and wished) the handmaiden be brought along, with him only acting as the messenger of this command. I think it's fair to assume that he was given these instructions off-screen, by the Queen (Padmé), and simply acted on them.

Part of the movie script, conveying the exchange between Panaka, Qui-Gon and Padmé

Yes he did. This point is explictly address in the (until recently) canon sourcebook Star Wars : The New Essential Guide to Characters. 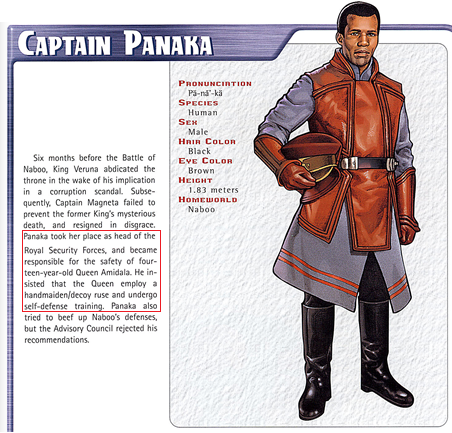 That being the case, it explains the fact that he was somewhat curt with the Jedi when he asked them to take Padme into Mos Eisley. He wasn't directing his frustration at them but rather at the Queen who was stood next to him in disguise.

57
Why did Padme use her real name?
41
Did Qui-Gon know the Queen was a double?
19
How could Padme (and Anakin) not know she was carrying twins?
3
How can Anakin's dream about Padme have been precognitive?
28
Was Anakin really the only human who could race pods?
19
If Queen Amidala had signed the treaty, would the Republic Senate recognize it as legitimate?
43
Did Palpatine know Anakin would tell Mace Windu who he really was?
6
How did Capt. Panaka read R2's serial number?
12
How did Darth Maul know that Amidala was on Tatooine?
6
Did Ahsoka know Padme was pregnant?