In Jurassic Park, why did Nedry use this exit plan?

Tonight, me and my partner are rewatching Jurassic Park for the third time this year and we started wondering about Nedry's journey to the East Docks.

Why did Nedry shut off the fences?

The novel covers your first point. In order to gain unfettered access to the cryo-room so that he could steal the embryos, Nedry needed to shut down all of the security.

Note that he could have gotten off the island whenever he wanted (he wasn't a prisoner), but he wanted to do it in a way that offer plausible deniability that it wasn't him that stole the DNA samples. They might suspect him of taking the samples but they'd have no outright proof

Which way should he have gone?

We know that his destination was the East Docks (in the film, to meet the ferry and in the book to meet Dodgson's boat) and we know that he took a wrong turn and ended up being killed by a Dilophosaurus. On the strength of that, I've used the original 'screen-used' tour map prop to show his likely proposed route and likely accidental route. 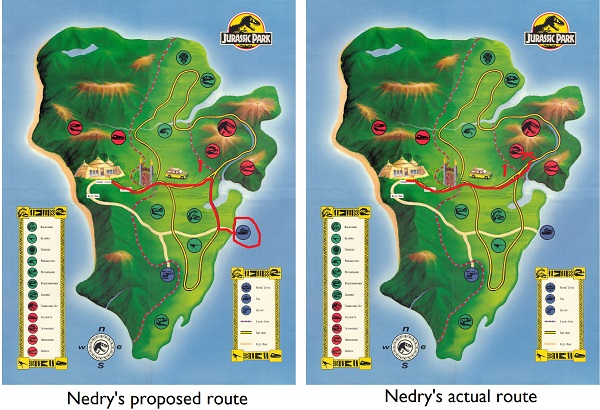 For the record, in the movie the arrow to the docks originally pointed upwards shot immediately before but was then pointing to the left in the very next shot, before his car hit the signpost. Under the circumstance, I think we can peg this down to a production error.

Why did he have to go through the park?

Because the visitor centre is on the West side of the island and the docks are on the East side of the island. In order to travel between these, you need to cross the park however under normal circumstances you'd only travel alongside enclosures containing relatively benign dinos such as the Stegosaurus, Gallimus and Brachiosaurus.

Nedry was not planning to leave. He was planning to make it to the east dock, drop off the embryos at the dock, and return. He figured he would be back so quickly that no one would miss him.

The boat was leaving sooner due to the storm. His quickest route was through the park and perhaps he had to shut the fences down to gain access to this route

Not the answer you're looking for? Browse other questions tagged character-motivation jurassic-park or ask your own question.

3
Why was the visitor center located on the opposite side of the island from the docks and helipad?