Can you find or draw a diagram of the Icosahedron orb stack from Anathem by Neal Stephenson?

I'm having a hard time visualising some of it.

Based on the description on page 454 of Anathem, I've roughed out a model of the Daban Urnud.

I've not shown the mass of connecting cables and internal travel tubes as those would distract from the main plan. 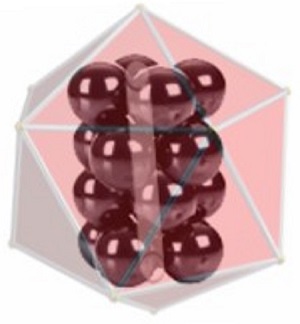 Blow a balloon out of steel, almost a mile wide, and fill it half full of water. Repeat three more times. Place these four orbs at the corners of a square, close to one another, but not quite touching.

Repeat with four more orbs. Stack the new set atop the old. But give it a forty-five-degree twist, so that the upper orbs nestle into the clefts between the ones below, like fruits stacked at a green-grocer’s.

Pile on two more such orb-squares, repeating the twist each time. Now you have sixteen orbs in a stack a little more than two miles high and a little less than two miles across. Running up the center of the stack is an empty space, a chimney about half a mile in diameter. Pack that chimney with all of the good stuff: all of the complicated, expensive, exquisitely designed praxis that we have long associated with space travel. Much of it is nothing but structure: steel trusswork to grip those orbs and hold them securely in their places while the entire thing is spinning around at one revolution per minute to create pseudogravity, maneuvering to dodge incoming bogeys, managing the resultant slosh, accelerating under atomic power, or all of the above.

Once you’re satisfied it’s never going to fall apart structurally, weave in all of the other stuff: a storage magazine capable of holding tens of thousands of nuclear propulsion charges. Reactors to supply power when the ship is far from any sun. Inconceivably complex plumbing and wiring. Pressurized corridors along which Urnudans, Troäns, Laterrans, and Fthosians can move from one orb to another. Trunk lines of optical fibers to pipe captured sunlight from the exterior of the icosahedron to the orbs, to shine on their rooftop farms.

The orbs themselves are comparatively simple. Inside of them, the water’s free to find its own level. When the whole construct is spinning, the water flees to the outside and settles into a curve on which “gravity” is always equal to what it was on the home planet. When the ship is under power, the water settles into the aft part of the sphere and levels out. People live on the surface of the water in houseboats linked by a web of stretchy lines and held apart by tough air-bladders; when the shape of the water changes, there’s always a bit of jostling. Like any proper boat, though, these are rigged for that; the cabinets have latches so that they don’t fly open, the furniture is attached to the floor so it doesn’t slide around. People live as their ancestors did on the home planet, and may go for days, weeks, without thinking very much about the fact that they’re sealed in a metal balloon being spanked through space by A-bombs—as their families back on Urnud, Tro, Laterre, or Fthos might never think about the fact that they live on wet balls of rock hurtling through a vacuum.

Note that the errata section of the Anathem Wiki describes the description as "inconsistent", suggesting that in later works, the stacks of orbs are able to turn freely in opposing directions, something that wouldn't be possible if they were interleaved.

Not the answer you're looking for? Browse other questions tagged neal-stephenson anathem or ask your own question.

15
Do these Neal Stephenson books have a recommended chronological order?
12
Difference between Anathem and Voco
12
What is the purpose/rules of the Day Gate in Anathem?
11
In Neal Stephenson's “Anathem,” is Cnoüs' statue a reference to Freemasonry?
12
Why does Neal Stephenson use the term Nipponese instead of Japanese?
11
When did the Millenarian's incantations start [spoilers]?
6
Did Neal Stephenson make up the nickname for the ISS in Seveneves?
9
Is the word “vitamin” meaning “any item shippable to space” a creation of Neal Stephenson in Seveneves?
10
How did the aliens keep their waters separated?