Where are Obi-Wan Kenobi's and Qui-gon Jinn's Lightsabers? 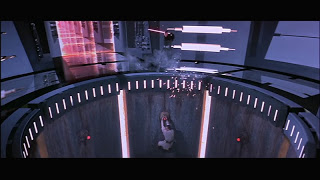 The answer I've provided is based on Wookieepedia articles (linked in text) and my recollection of the G-canon material.

This wiki article states that Obi-wan constructs a new Lightsaber after his first one is kicked down the melting pit (the big pipe you mention), which suggests that he does not recover his original lightsaber.

As such, my answer to this is that he built a new one and that the first one is left at the bottom of the pit.

As for Qui-gon Jinn's lightsaber, it was used briefly by Obi-Wan Kenobi following the events of The Phantom Menace, but only until he had time and opportunity to construct a new one. After that, its fate is unknown.

Note: There has been some speculation that Kenobi brought Qui-Gon Jinn's lightsaber with him to Tatooine, where it remained until Luke Skywalker came back to construct his second lightsaber, following the events of Empire Strikes Back. This article, however, disputes this.

That "big pipe" was in fact a melting pit. The implication is that in the centre of the pit...erm...stuff gets melted. Since Obi-Wan's original lightsaber went into the pit, we can assume it was destroyed.

The struggle took them around the edge of the melting pit and into the nooks and alcoves beyond, into shadowed recesses and around smoky pillars and pipe housings. Twice, Obi-Wan went down, losing his footing on the smooth flooring of the melting pit’s rim. Once, Darth Maul hammered at him with such determination that he scorched the young Jedi’s tunic, shoulder to waist, and it was only by countering with an upthrust counterstrike to the other’s midsection and by rolling quickly away and back to his feet that Obi-Wan was able to escape. - Phantom Menace - Official Novelisation

Sometime before the start of Attack of the Clones (some 10+ years later), Obi-Wan stopped using Qui-Gon's lightsaber and constructed a second lightsaber of his own, identical to the first.

As to where the real prop went, Liam Neeson apparently has it.

"Before we started shooting, George showed up with a huge gilded box. In it were lightsabers, and he asked me to pick one. I chose one, and he said, 'That's yours now.' It was quite a moment. And I did get to keep it — it was mounted for me at the end of the film. I was thrilled."

Not the answer you're looking for? Browse other questions tagged star-wars lightsaber the-phantom-menace obi-wan-kenobi or ask your own question.

22
What happened to Obi Wan's lightsaber after the duel between Obi-Wan and Darth Vader on the Death Star?
11
How could Darth Maul's survival go unnoticed?
-1
Why didn't Obi-Wan give Jinn's lightsaber to Anakin?

24
Why did Qui-gon and Obi-wan retreat from the Destroyer droids?
46
Why did Qui-Gon advance against Darth Maul without Obi-Wan?
15
Was Darth Maul deliberately leading Qui-Gon and Obi-Wan into that shaft reactor pit room?
3
Why did Obi-Wan and Qui-Gon Jinn attack Darth Maul unfairly instead of one-on-one?
8
Did Kenobi use the dark side against Maul in Episode I (Phantom Menace)?
48
How did Obi-Wan survive the trip to Naboo?
9
Which lightsaber form did Obi-Wan use against Maul on Tatooine?
3
In Star Wars IV, could Darth Vader have captured Obi-Wan Kenobi's lightsaber using Force Pull?