Who was the fifth army in The Hobbit: The Battle of the Five Armies movie?

Who was the 5th army in The Hobbit: The Battle of the Five Armies?

In the book, it's the Wargs.

it was called the Battle of Five Armies, and it was very terrible. Upon one side were the Goblins and the wild Wolves, and upon the other were Elves and Men and Dwarves.

So in the book the armies are as follows:

The Eagles just turned up out of the blue. See also here.

In the ... did they really make three Hobbit films??!

Disclaimer: I know nothing about the film. The following list is copied from @Keen's answer.

In the film, the armies are as follows:

From Chapter 17: The Clouds Burst:

“So began a battle that none had expected; and it was called the Battle of Five Armies, and it was very terrible. Upon one side were the Goblins and the Wild Wolves, and upon the other were Elves and Men and Dwarves. This is how it fell out."

I'm guessing you haven't read the book, and are confused about the upcoming movie. In the books, the 5th army/faction is the Wargs, per the original text and NeuroBear's answer. However, the books are significantly different from the films in that the Wargs in the books are intelligent. The films changed them into being merely evil riding animals, essentially an Orc version of a horse. In the films, the Wargs are also not a significant presence on the battlefield. If anything, Trolls would be something of a substitute. The film went with the list below (in order of appearance):

And also the Eagles and Beorn show up, who swiftly defeated that final army.

That the 5th army are a 2nd army of Orcs and goblins is a significant change from the book. In the book, all the Orcs/goblins come from Gundabad, as Azog was dead in the book at this point in time, having died in the battle where Thorin earned his title of Oakenshield. And also the Dol Guldur plot line was less significant. In the book, the one force of Orcs from Gundabad included Wargs and bats.

This color-coded map by PJ & co shows the troops movements in the battle using 5 different colors + a sixth color for Thorin's 13 and Beorn (neither of which are "armies"):

This seems (to me, at least) a canonical source as far as the movie is concerned. 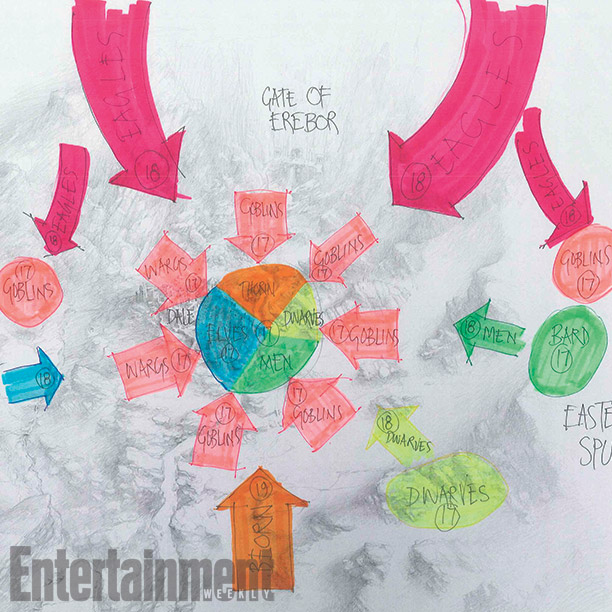 The image was originally published in this Entertainment Weekly article.

This quote from the article:

“Tolkien uses eagles in a way that can be kind of awkward because they tend to show up out of the blue and change things pretty quickly,” says the director. “So here they’re just part of the plan, not the saviors. [...]"

sounds (to me, at least) as a confirmation that the eagles are considered one of the armies, and not just a deus-ex-machina.

The article was talked about on theonering.net, where TORN staffer Greendragon commented (emphasis mine):

The map in EW’s article shows six different colour-coded groups – goblins and wargs are one colour, with eagles, elves, men and dwarves each having a different colour. This would seem to confirm what we at TORn have speculated in our panel presentations at various conventions – that Jackson’s five armies will in fact be men, dwarves, elves, orcs and eagles, with the wolves/wargs being a part of the orc army. The sixth colour on the diagram is for Beorn and Thorin – perhaps to highlight the key players of the battle (although Bard, though having his own spot on the schematic, does not share this orange colour – and it’s interesting to note that Dain, surely a key player, is not mentioned by name on this map; nor is Azog).

The EW article itself is still online, but I cannot see the images anymore.

I was able to retrieve the missing image thanks to google, who pointed me at this Collider article citing and quoting the EW one, together with the map.

This article on a french site has some translated passages from the EW article together with another battle map, depicting a previous moment.

An additional, "second-hand" (as it comes from the movie promotional campaign, instead of directly from the movie production team) evidence supporting this theory: Warner Bros Italy, using the official (italian) twitter account for the movie, held a contest asking twitter users to show their support to one of the five armies using specific hashtags:

(I first talked about this twitter contest in a comment to Febby's answer, but then I thought it was better to write a complete answer)

Another secondary evidence supporting the eagle theory, this time coming from the "To Which Army Do You Belong?" test recently linked from the movie facebook page.

After answering six questions, users are redirected at one of these five pages:

(I concede that promotional sites do not necessarily represent the highest degree of movie canonicity, but I cannot believe that Warner did not ask the production team for an official confirmation concerning something both simple and important as the identity of the eponymous armies)

The book seems to say, before the start of the battle, that the 5 armies are the Goblins (same as Orcs?), wild Wolves, Elves, Men and Dwarves. If that’s what the book is saying, then the Eagles, who do not appear until the end of the battle, are not included in the 5 armies.

Also the book mentions only one Goblin (Orc) army, not two. Since the movie didn’t seem to have an army of Wolves/Wargs (it only showed a few of them), maybe the second Orc army under Azog was added to replace the wolf army in order to keep the number of armies at 5 and be consistent with the title. Then the 5 armies would be the Elves, Men, Dwarves, Orc army under Bolg, and Orc army under Azog.

In the movie they seem to be using 2 armies of Orcs. One from Moria which are the first Orc army to arrive on the battleground and the second, the Orcs from Gundabag, as the second army of Orcs attacking from the North.

The animals. Gandalf specifically tells Radagast to gather them, as they will be needed to fight the coming evil of Sauron's forces. It's made clear both in his directing Radagast to assemble them (and not just eagles and Beorn; there were more animals) and in them coming at the end to turn the tide. There is absolutely no focus on the wargs or wolves in the film. So it's the dwarves, elves, men, Sauron's forces of orcs, goblins, and other nasty creatures ... and the animals.

Most likely the Wargs as it was in other written media

If I'm not wrong, on this page the 5 armies are:

FebbyFebby
17
3
Add a comment  |
Highly active question. Earn 10 reputation (not counting the association bonus) in order to answer this question. The reputation requirement helps protect this question from spam and non-answer activity.

Not the answer you're looking for? Browse other questions tagged tolkiens-legendarium the-hobbit the-battle-of-the-five-armies or ask your own question.

20
Does using the Black Speech attract the Eye of Sauron?
7
What is the origin of the wargs, and are they featured in any of Tolkien's works other than LOTR and the Hobbit?