Single most powerful weapon in the 40k universe.

Is there one single weapon in 40k that is head and shoulders above the rest?

In my mind the d-cannon has no limits on its power. But this can only effect a small area, I'm thinking more weapons that exists but can't be used in the game.

While Cyclonic Torpedoes are pretty powerful, there is something far more dangerous: The Celestial Orrery, built and owned by the Necrons.

It's basically a real-time 3D holographic map of the entire galaxy, that allows for physical interaction. If you were to move a planet or snuff out one of the star lights, a similar fate would immediately beset the real thing. A Necron could destroy the heart of the Imperium in one move by snuffing out the light representing Terra (or her star, Sol) and causing the annihilation of the Emperor, the Imperial Palace, et cetera.

You can imagine the devastation if someone accidentally trips in this thing. 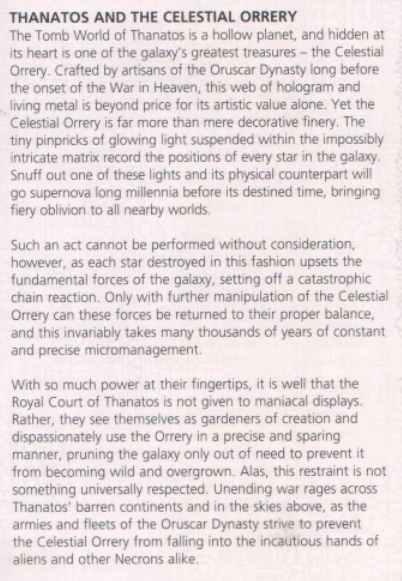 When Exterminatus has been declared on a planet that has pissed off the Inquisition, they usually use Cyclonic torpedoes to obliterate the entire world.

A tyranid Hive Ship could also be considered... while not necessarily a weapon in the same vein as a gun or bomb, it's really just a huge tyranid. And tyranids themselves are living breathing weapons.

In the Warhammer 40k universe, I don't think there is really any ultimate handheld weapon, at least not in anything I've read. Most famous weapons, like Gorechild and Gorefather for example, gain their reputation from the guys that wield them.

There is always Anathame, the knife that almost killed Horus. But then that knife wouldn't be much used against a cyclonic torpedo...

Aside from the weapons already mentioned in answers there are two more:

It does not extinguish the live on a planet but the whole planet itself: 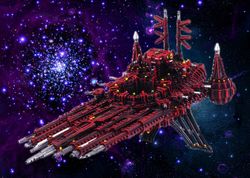 These weapons were able to destroy a complete solar system with a single blast (I think two or three of them combined their power). They were originally built by the Eldar. It is unknown though what their maximum power would have looked like if all of the Blackstone Fortresses had combined their firepower, as most of them got destroyed before that could happen. 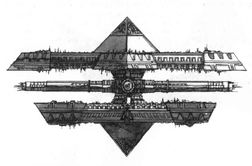 Just thought I'd add this in since its not been mentioned yet and is by fair in a way more powerful than the Exterminatus!

There are spoilers here if you haven't read the book Velador.

This weapon has a powerful shield blocking others from deactivated it. It was a relic from the past Eldar glory days.

Upon receiving the fireheart:

His impossibly wide grin grew wider. "Well, unless circumstances necessitate. Anyway, the nature of the problem was presented to us by the dancing fools, that you lacked a weapon of sufficient potency to incinerate the planet properly. My Lord Vect, in his infinite wisdom, proceeded directly to his grand armoury and produced this." Sarnak’s awful face disappeared, and a monolithic device, tall as a Revenant, took its place. Gems studded its sides at regular intervals, one of great size mounted on its summit. "Behold!" he said pompously. "The Fireheart. A device of the elder days, when our kind strode the Great Wheel as masters over all, and didn’t live such dreary, funless little lives on boring worldlets. It’s in the hold of my ship, waiting just for you. Aren’t we nice?" He giggled.

The device can be activated from anywhere by powerful seers. All the Eldar needed to do is deploy the Fireheart to the planet.

"The Shadow," said Taec bluntly. His vision flickered through his mind’s eye, he on the surface of a world tearing itself apart by a monumental device, and falling to be burned, his soul consumed. "It will prevent remote activation."

Tall among them was the building-sized Fireheart.

It effectively goes into the planet's soul and wrecks it. Destroying it from the inside out.

Place it there, and the Fireheart will consume the planet and its dead soul.

The machine directed their minds and amplified them, pushing their strength down, down into the rock. Taec and the seers went with the Fireheart as its semi-sentient core sought the fault that had once fed the eruptions of the Godpeak. It thrust down, past a domed magma chamber empty of heat, through plugged tubes that had once rushed with molten rock, down, down to the mantle, whose currents of molten stone were as yet unperturbed by the war on the surface.

Taec looked up at the Fireheart. It was old, as old as the ancient empire. The architecture of it was neither that of Commorragh nor that of the craftworlds, but somewhere between the two.

Basically this is fantastic and I think can be up there with the most powerful weapons. It destroyed the planet in half a day or so. So if you deployed it in the correct positions, the inhabitants wouldn't even have enough time to counter it.

They can destroy ALL life from orbital bombardment.

4
How rare are untouchables in the Warhammer 40k universe?
16
What makes Titans so valuable in the Warhammer 40k universe?
8
How can an Imperator Titan house a city on its shoulders when it's only 100 meters tall?
6
Which of the Warhammer 40k races have allied with one another most often?
11
How many Chaos God are there in WarHammer 40k?
6
Can (and do) single navigators pilot multiple ships through the warp?
7
Did the Old Ones create Chaos to win the war with the C'tan?
8
Do male Blanks exist in the 40K universe?
6
Do the mechanicum mistake AI for machine spirits?
6
What did the emperor do before becoming the Emperor?