Does Captain America have a dark side? [Mild Spoilers]

In the leaked Age of Ultron footage, we see Tony and Steve have a slight word-fight. In this, they talk about Scarlet Witch's visions, where the conversation goes:

Tony: I don’t trust a guy without a dark side. Call me old-fashioned.
Steve: Well, let’s just say you haven’t seen it yet.

What is Steve referring to here? Is there any reference to this in comics & other canon sources?

As far as I know, we haven't seen an "evil" side of Captain America, but that doesn't mean he doesn't have a "dark" side. 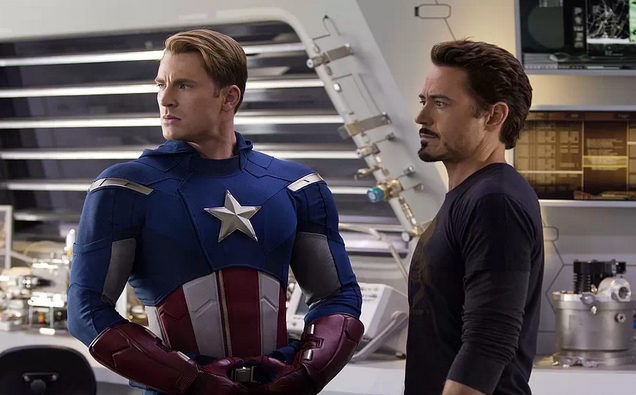 The best example from the MCU is in The Avengers, when he and Tony Stark are butting heads. Tony is goading him, but Steve gives as good as he gets: "Big man in a suit of armor. Take that away, what are you?" The implication is "You're nothing," which is a pretty intense, even "dark" comment to make to a fellow team member.

And when push comes to shove, it's the upstanding Steve who first challenges him to a fight, not the arrogant Tony:

[Stark turns to leave but Steve stops him]

Steve Rogers: You're not going alone!

Tony Stark: You gonna stop me?

Steve Rogers: Put on the suit, let's find out.

Tony Stark: I'm not afraid to hit an old man.

Steve Rogers: Put on the suit.

If Hawkeye hadn't interrupted, Steve was literally prepared to beat down an unpowered non-combatant on his own side, simply because he was being annoying and arrogant.

Now, it's pretty safe to say that this behavior was influenced by the "angrification" of Loki's staff, but given that Cap is still butting heads with Tony in the scene you mentioned from Age of Ultron, it's clear that that impulse is truly within him. No doubt it stems from his "I don't like bullies" doctrine.

But if that confrontation had played out, and Cap had attacked his old friend's son just for being disrespectful, I think that would count as a touch of "darkness" in his character.

As far as I know and researched, no.
It doesn't mean the producers can't give us something new, but I didn't find any reference to Captain America's evilness. I'd probably presume he isn't talking about a evil side, just a less "polite" side.
Also, don't forget the Scarlet Witch is a very powerful mutant and we may be presented with something new.

I have a strong feeling that this is in reference to the upcoming civil war film.

In the equivalent comic story line:

Captain America defects from shield to resist the registration of super powered heros. In the comic Iron Man takes a dark rite to achieve his goals, but perhaps this is reversed for the movie?

As far as the movies go, I think the dark part of him is that he's a soldier at the core and the war is never over for him.

We forget that a 'dark side' doesn't necessarily mean evil. It can also mean the obverse side of a trait which can also be positive.

Tony's genius, for example, is that he's intuitive and can make large leaps forward to conclusions. Sometimes, that works for him -- take, for example, his being able to intuit where Loki will strike in the Avengers. However, the dark side of that talent strikes when he fails to think past that conclusion -- Ultron being a shining example there.

Cap stands for what he believes is right. He's an incredibly tenacious person; any lesser person faced with what he's been through would have been huddled in a corner gibbering, not going out and trying to protect people.

That said, the flip side of tenacious is stubbornness, and idealism without realism is incredibly dangerous. Also, while Cap is loyal to those he cares about, he is loyal first and foremost to what he believes is right and, as he's said in the comics, the American Dream -- i.e., the ideals of what America is supposed to stand for, or rather, what immigrants like his parents dreamed America was - freedom, opportunity, equality.

Which means that loyalty to people -- even those closest to him -- comes second after loyalty to principles and to what he perceives as his duty.

He crashes a plane to save millions rather than ditch the plane and go back for that life with Peggy, for example.

And no matter what we see in the trailer re: Bucky, he also would and could have killed Bucky if that was the only way he could have brought those helicarriers down. Granted, he tried his very best not to do so and it would have killed him to do it, but there's no doubt he WOULD have, if that was the one and only way he could have saved millions of people. Only AFTER the helicarriers are safely taken care of does he stop fighting and focus on trying to break Bucky's brainwashing. And this is the guy who would have (some would argue, did) die to save Steve on the train AND the guy he loves like a brother.

So it's small wonder he'll fight Tony if he must. Also, that view is not something Tony would understand. Tony's a man with few friends and once he's given his loyalty, it's to people first, principles flexible.

Also, Cap absolutely does not surrender and he's worse at compromising.

The problem with that is that it inevitably leads to Pyrrhic victories and endings like Thermopylae. Sometimes, no ideal is worth fighting to the last man. Sometimes, it's better to compromise, to have balance.

And Cap can't always do that. Although his goal is to protect people, his idealism and stubbornness means he can lose sight of that and put principles above people.

In the comic Civil War, in fact, that's exactly what happens -- Cap's winning, but realizes, far too late, that innocent people are getting hurt because he's done exactly that -- stuck by his principles without counting the cost to others. It's why he stands down, but by then, it's too late.

And putting principles above people can be fatally easy for him because he has nothing to lose, especially in the MCU. No home, no significant other, nothing BUT those principles.

IMO, that's why, to me, lawful good people (to use the old D&D term) can be far, far more terrifying than any form of evil. Good at any cost can be even more devastating than evil.

Another theory, and again, this is all me, is that we might be getting a hint at a Skrulls story line (Secret invasion anyone?)

Maybe the Cap that says that is in-fact a Skrull agent already infiltrated?

31
What is Captain America's worst fear?