What does EPS stand for?

I often hear the abbreviation EPS on Star Trek (EPS Grid, EPS Conduit, etc). I know it relates to the ship’s energy systems, but I'm not sure I’ve ever heard anyone say what it actually is.

So what do the letters EPS actually stand for?

I believe it stands for Electro-plasma system

The technology is based on storing energy in a highly energetic plasma, "electro-plasma," and distributing it throughout the ship via plasma conduits, called EPS conduits. The system of conduits is also referred to as the plasma grid. EPS conduits usually start at a matter-antimatter reaction assembly, also called the warp core, where matter is converted to energy, and extend to all areas of a ship. Plasma conduit power levels are regulated by plasma coolant ducts, and monitored by plasma conversion sensors.

Here is more information on those conduits

And here is an image of a Secondary Plasma System 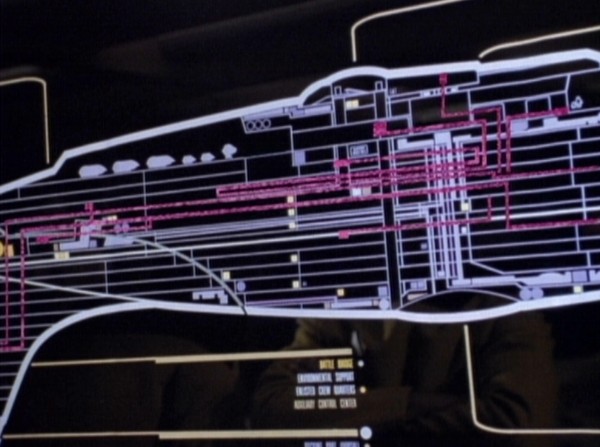 This is the Electro Plasma System (also known as the Electroplasma System), a series of conduits that travel around the ship providing charged plasma power to vital systems.

And it's mentioned in several episodes, albeit never by its full name:

NOG: No! I have to listen at precisely eighty two decibels because that's the volume Worf listens at! Of course, if I could've simply told him why I needed two metres of electro-plasma conduit from the Defiant, he probably would've just given it to me and things would be a lot quieter around here! DS9 : In the Cards

DATA: The primary plasma system does not indicate a power drain from any of the transporters.

LAFORGE: Then whoever used the transporter must have bypassed the primary feeds.

DATA: Tracking power from secondary systems. No surges to any of the transporters indicated. TNG : The Mind's Eye

19
Couldn't you use systematic phaser fire to find a known cloaked enemy?
20
What is a quad?
12
Is the term "Borg" an acronym for something, or is it just an abbreviation of "Cyborg"?
20
Has any Milky Way native traveled outside our galaxy?
3
Do certain energy beings not have to "eat" (take in energy somehow)?
11
Does anyone perform routine maintenance on Data?
5
Does Spock have a PhD?
11
When did 'Star Fleet' become 'Starfleet'?
13
When did the writers of Star Trek decide the Federation doesn't use money?
2
Has Star Trek ever addressed the issue of superluminal communication and time travel?