Who is the Rebel pilot who got stranded during the Battle of Yavin and had his place taken by Luke?

When I was a teenager, I subscribed to a Star Wars Comic book, translated into Swedish. In one issue, there was a story that took place some short time after the Battle of Yavin, about a Rebel pilot who, for some unknown reason, was grounded during the battle and his X-wing was instead given to Luke Skywalker.

This made him bitter (for having missed the most glorious battle in the history of the Rebel Alliance) and hostile towards Luke (the brat who'd stolen his ship and his glory). The story goes on to him wanting to prove himself just as good as Skywalker.

I can't remember the character's name and very little of his appearance (which was generic), but I do recall him being human.

Neither can I remember the issue or name of the comic book (If I had, it would probably be a Swedish name and do you no good anyway).

I would love answers to all questions, but anyone of them will be good enough.

In the comic Vader's Quest, published in 1999, Red 5 pilot, Jal Te Gniev is grounded for the Battle of Yavin due to measles. He was replaced by Luke Skywalker.

However, he did not participate in the Battle of Yavin due to measles. His X-wing was borrowed by Luke Skywalker. Gniev felt great hatred towards Skywalker because he felt as though he had been denied his rightful glory in destroying the first Death Star, especially considering he had flown thirty-one missions for the Alliance.

I can find no reference to ever wanting to necessarily prove himself as good as Skywalker. But after blaming him and being partly responsible for the death of innocents because of his hatred for Skywalker, he chooses to help save Luke.

With Bobek's death, Gniev reevaluated himself and set out to save Luke Skywalker, whose life he had placed in extreme jeopardy.

Gniev then acquired a Z-95 Headhunter which he flew to Jazbina to save Skywalker. Skywalker, meanwhile, had become entangled with Lord Prepredenko and Princess Syayna. Upon the arrival of Darth Vader and a Interdictor who prevented anyone to flee the planet, the situation on Jazbina looked grim. Gniev landed on the planet and joined the efforts of Skywalker and Syayna to save the planet. Using Skywalker's X-wing, Gniev flew into space to attack the Interdictor.

Originally, the comic was C-Canon, as were most EU materials. Since the canon purge earlier this year, this comic is considered part of The Legends Canon

This is Jal Gniev who appears in the four book comic series; Vader's Quest.

He was grounded due to measles and missed the Battle of Yavin. His X-Wing was given to Luke. Suffice to say, he's quite grumpy about this and has a series of misadventures in his (ultimately successful) attempt to prove himself a worthwhile individual.

As far as "canon status" is concerned, since only the 6 feature films, The Clone Wars and Rebels are considered part of the true canon, this falls under the heading of "Legends", licensed but able to be ignored by the writers. 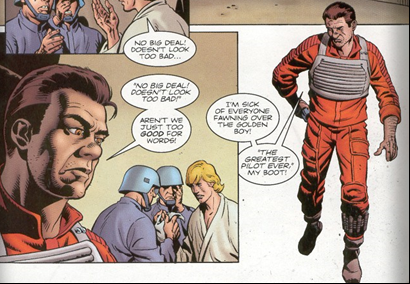 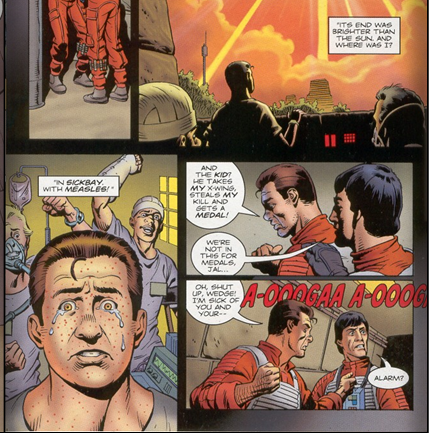 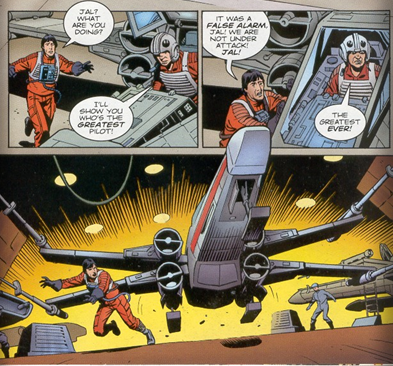 In the current canon, the previous Red Five was Pedrin Gaul. 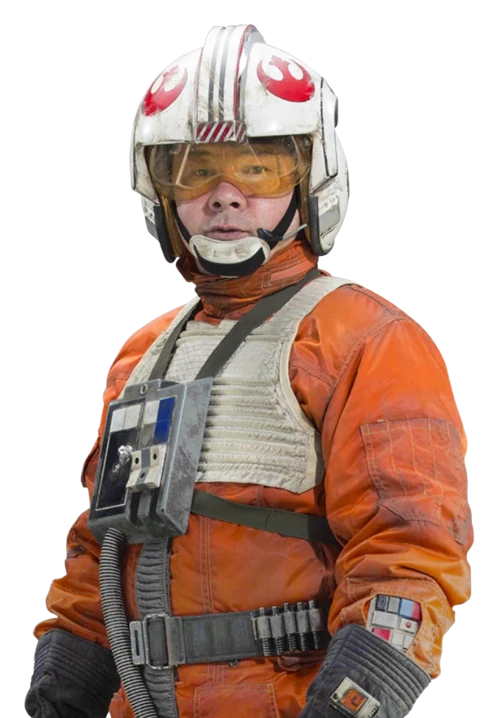 He was only a cadet and apparently lacked proper discipline. One fellow pilot considered him "awkward yet eager." He was killed in the Battle of Scarif, shortly before Luke arrived on Yavin, after failing to stay in formation.