AT-ATs managed to get to the surface of Hoth - during the Battle of Hoth. 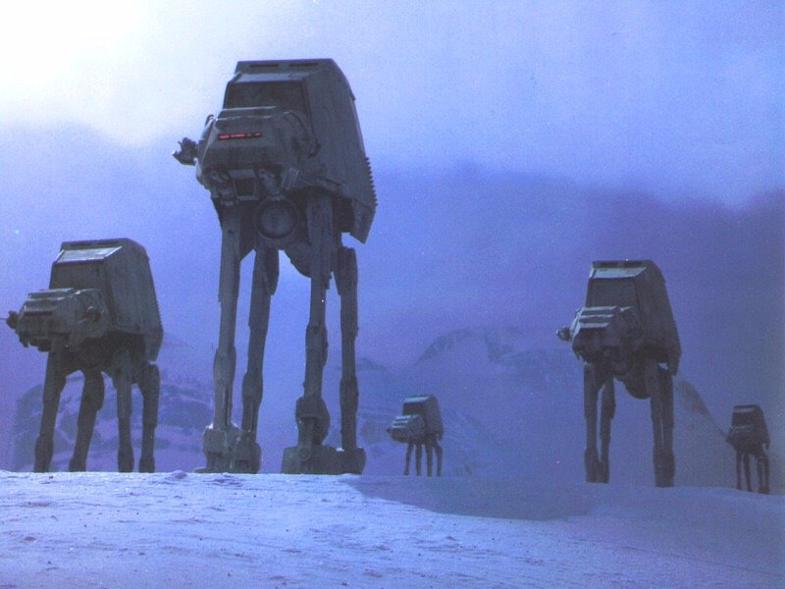 Two reasons to land the other troops: 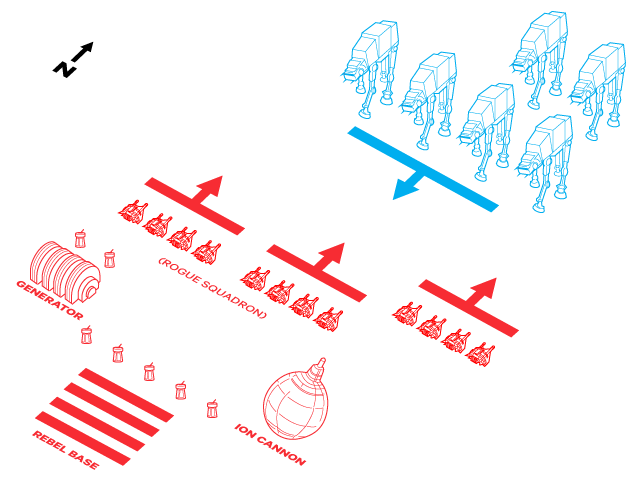 Because of the rebel defenses, an infantry assault with storm troopers is a bad idea. Assaulting a heavily-defended position on foot or with light vehicles is costly in manpower, as well as time-consuming: you have to overwhelm the fortified position, and infantry doesn't cut it. Especially when you have a group of AT-ATs with you. They are heavily-armored and cannot be easily destroyed by your foe. They were able to walk right up to the shield generators, taking minor losses and decimating the rebel defenses, and ultimately destroying the generators. It was the perfect plan. However, they failed to take into consideration the ion cannon. Whether they did not know of it, or they failed to see the risk, it enabled the rebels to get past the blockade.

None of the answers so far actually address the question - although they do a nice job of explaining why the AT-ATs were sent in at all.

In almost all other depictions of the Battle of Hoth (various games, and the remastered versions of movie) we see a combined force of AT-ATs, AT-STs, speeders and infantry attacking the rebel lines. Even the original version of the movie included a couple of AT-STs.

So the answer is - the AT-ATs were not sent in alone, but we don't see a lot else in the original movie.

General Veers: My Lord, the fleet has moved out of lightspeed. Com Scan has detected an energy field protecting an area of the sixth planet of the Hoth System. The field is strong enough to deflect any bombardment.

Darth Vader: The Rebels are alerted to our presence. Admiral Ozzel came out of light speed too close to the system.

Darth Vader: He is as clumsy as he is stupid. General, prepare your troops for a surface attack.

AT-ATs were the safest way to attack the shield generator. Their armor was too thick to be penetrated by the Rebels' snowspeeders:

Luke Skywalker: That armor's too strong for blasters...Rogue Group, use your harpoons and tow cables. Go for the legs. It might be our only chance of stopping them.

The plan was that the AT-ATs would only have to destroy the shield generator, and this would allow orbital bombardment from the complete safety of space. Other ground forces would have been unnecessary. Meanwhile, the Imperial fleet would prevent Rebel forces from escaping the Hoth system since the Empire's spaceborne forces were vastly superior to the Rebels'. However, the Rebels were able to use their ion cannon -- which the Empire was unaware of -- to disable the Star Destroyers long enough for Rebel transports to escape:

Princess Leia: All troop carriers will assemble at the north entrance. The heavy transport ships will leave as soon as they're loaded. Only two fighter escorts per ship. The energy shield can only be opened for a short time, so you'll have to stay very close to your transports.

Princess Leia: The ion cannon will fire several shots to make sure any enemy ships will be out of your flight path. When you've gotten past the energy shield, proceed directly to the rendezvous point. Understood? Good luck.

It was a very "safe" plan that should have resulted in minimal Imperial losses, but the ion cannon made the Imperial fleet less effective and the use of the tow cables resulted in unexpected AT-AT losses (though the AT-ATs did succeed in completing their objective).

The AT-ATs were not sent alone. There is a shot in the movie (I'm not sure if it is in the original, but I know it is in the special editions) of an AT-ST moving alongside the AT-ATs. My thought is that the AT-STs are acting in a support role, much like a Humvee would support a tank during combat operations.

Other answers have also touched on the issue of the shield generator: the only reason we see "Walker" units such as the AT-AT and AT-ST is because repulsorlift vehicles can't pass through the shield, nor can air units fly through it. So, the Empire's only option was to land a heavy assault force of walker units OUTSIDE the shield generator and push their way in to disable it.

Only THEN could they send in the aircraft and troop transports to take the base.

In addition, from the name of the AT-AT (All terrain armored TRANSPORT) we can assume that the AT-ATs carried a group of troops inside them, but rather than deploy those troops and make them slog through the snow and ice, they probably kept them inside until they needed them.

The ground forces were IN the AT-ATs, thus the armored transport portion. They had to land so far away because the shield generator, it would have been pretty useless to have totally exposed ground troopers trying to get close or even keep up with the walkers until the shield was down. The empire would not have bothered with speeders adapted to the cold, when a walking tank would do the trick.

Also special Imperial troops engaged the rebels entrenched near the Shield Generators according to Star Wars Battlefront II. The ATAT's were involved in the main advance but ground forces were deployed too. I don't think the game is canon though.

The imperial ground forces were part of the remaining Fett clones in the 501st.

If I remember correctly, the empire did send infantry to compliment the AT-ATs. The rebel base as eventually stormed by Imperial forces and the outer defenses were engaged by special storm troopers (special due to their unusual armor configurations, which probably means that they are specialized in some way).

The AT-ATs did most of the heavy lifting however, destroying the heavy defenses possessed by the rebels and allowing the smaller infantry units to exploit the weakness their absence created.

The real strategic screw-up on the empires part though was the fact that they did not send aerial defenses or an escort of tie fighters to defend the AT-ATs. The AT-ATs only have forward facing firepower and are very un-maneuverable. The rebels exploited this with the rouge squadron they sent to intercept them, an action the empire should have predicted as the rebels have previously illustrated a fetish for small fighter craft. In the face of the faster, far more agile and harder hitting craft the rebels sent, the AT-ATs were sitting ducks and consequently suffered high casualties.

46
Battle of Hoth: how did the AT-ATs manage to disable the shield generator?
16
AT-ST at the Battle of Hoth in the original version of Episode V?

46
Battle of Hoth: how did the AT-ATs manage to disable the shield generator?
28
Why didn't the Imperials provide air cover to their forces on Hoth?
31
Why didn't the rebels on Hoth use X-Wings to fight AT-ATs?
25
Why didn't the stormtroopers radio for reinforcements at the Battle of Endor?
72
What is the benefit of an AT-AT walker over a conventional tank?
14
Why did the non-clone officers of the Republic serve the Empire?
26
Do we ever see regular (non-stormtrooper) ground troops?
26
Was Admiral Ozzel a Rebel agent or just incompetent?