The Master File by Richard Elliot 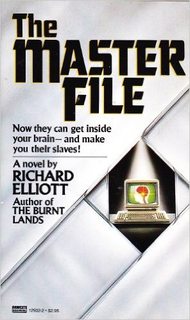 I'd been looking for this book myself and recently found it again.

A biochip implanted in the brain gives the recipients increased mental powers, but they become the tools of a power-crazed billionaire who has found the technology to manipulate the chips and plans to take control of America, and then the world.

The inventor of the implant was named "Sean Carrick" and that the female protagonist had been programmed to love him. The antihistamine (or other cold medicine) interfered with that programming, hence the need for her to pretend (and mentally play chess).

Some aspects of this sound similar to the mental programming described in the Crown of Slaves by David Weber - part of the Honorverse. However, other aspects seem to rule this out as the answer.

It reminded me of Stephen Bury's "Interface" (yes Neal Stephenson) But there were too many differences.

Nothing else I searched helped much.

Its too many to check every one, but the titles helped me remember "Helstrom's Hive" and "The Adolescence of P-1"

6
YA novel about sister is alien with two hearts and assassins come
8
Sci Fi novel with iPad-like computers and a trip to an alien structure
13
Book about alien eggs found in an asteroid that crashes in the sea
7
Itinerant doctor foils a would-be emperor's plans to commandeer old space technology to weaponize space
5
80s/90s Adventure Sci-fi Movie about Biological Lab
9
Sci-fi novel with an "Avatar"-like premise: disabled character is put into an alien body to study/spy on aliens
12
Sci-fi short story about assassins who become targets