Why was the Resurrection Ship so delicate?

In the re-imagined Battlestar Galactica, the Cylon Resurrection Ship is the single most important ship the Cylons have. After all, their very lives literally depend on it (without it, if they die, they die). Even though there may be other resurrection ships (certainly, after the events of season 2), they're still important enough to be escorted by multiple battlestars.
In today's navy, hospital ships are allowed to carry defensive weapons, and they can be as heavily armored as anyone wants. In the BSG 'verse, there's no international law to prevent the Cylons from building resurrection ships as tough and battle-ready as they like. But instead of building them like a heavily armored battlestar on steroids, they make them a delicate, spidery, flimsy lattice of glass and thin metal frames, without armor or weapons. Is there an in-universe or EU explanation for this? 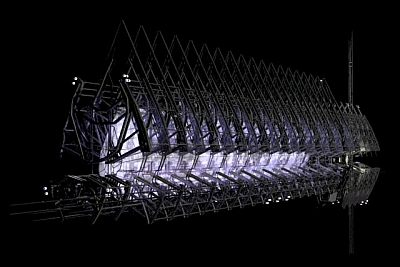 It is pretty, though.

The resurrection ship was replaceable and there were many of them, and also never intended to be near any battle. You get the impression there was always supposed to be several in range at any one time.

It was only as the human fleet got further from the colonies that the resurrection ships became further spread and much more important singularly.

You may have been thinking of the Resurrection Hub which was much more important and irreplaceable. But that was heavily defended.

They were never intended to be the only download point.

When the Cylons built their fleet, they had planned to wipe out humanity in a single decisive blow.‡ The resurrection ships were built primarily to support this one battle, and to act as an aid to the resurrection hub. Resurrection takes sufficient enough time that downloaded Cylons could not be expected to aid in the battle once they had died. As we saw in the episode Downloaded, they have the capability to buffer resurrections for a great deal of time. If they lost a ship in the initial battle, it would only delay resurrection until after their victory. In this context, they were disposable.

Things did not go as planned.

When the colonial fleet escaped, and the Cylons gave chase, they did not have the time or resources to build a new set of resurrection ships capable of withstanding a direct attack. Their hand was forced - they had to field the resurrection ships, as is, into the chase. Even then, it was not a tactically unsound move. The ship was guarded by other vessels, which made an attack by a single Battlestar a low risk proposition, especially since the Battlestar they were chasing was not seen to start many fights (Galactica had greater concerns guarding the fleet. Alone, it would have never sought to fight a couple of Basestars and the resurrection ship.) Nor did they have any reason to believe that the colonials had any knowledge of the resurrection ship. It was thought to be acceptable to allow the under-armored under-armed ship to remain in service in the field would be low risk.

Things did not go as planned.

The Galactica and the Pegasus meeting was something that could not have been planned for‡ nor would their knowledge of the existence of the ship, nor their willingness to attack it.

It was a tactical mistake for the ship to have been under-armored, but it is not illogical that it would have happened. The ship was never intended to be anywhere but the home system of the Cylons and the colonies.

While it is clear that crews of hospital ships may be armed for their own defense, GWS-Sea does not specify what are permissible weapons. The accepted norm for arming medical personnel ashore has been "small arms" such as pistols and rifles, and that norm was equally applied to the crews of hospital ships. Traditionally, it was thought that light, portable, individual weapons such as pistols and rifles were all that was needed for personal defense on hospital ships. Crew-served weapons, such as machine guns, were presumed to go beyond the need for use in self-defense, given that belligerents were bound to not attack hospital ships under the provisions of GWS-Sea.

Modern hospital ships, if there were attacked by a belligerent naval force, with guns and missiles, are totally defenseless. The weapons carried on USNS Mercy and USNS Comfort are pistols. This part of the analogy to a resurrection ship matches the facts - the resurrection ship had no weapons of consequence.

What does not hold is a lack of international convention that would make attacking a hospital ship an undesirable act. And even if such a convention existed, the colonials would be loath to define a resurrection ship as a hospital ship, as it would require defining cylons as life. In that point alone, the analogy falls apart, and is invalid.

‡ Six of the seven had intended this. The seventh had to pretend to intend this.

14
Why was there a maximum of 12 Cylons?
13
In the original war, why was there a colonial fleet?
5
Why was the compromised ship last to jump in episode 1 of BSG?
3
In Battlestar Galactica ('78) War of the Gods Pt. 2, what was found in the wreckage of the ship?
2
Why didn't the Cylons suicide jump a base ship into the Galactica?
4
Battlestar Galactica Resurrection
5
Is there an explanation for the resurrection of the Cylons?
4
Is the battlestar's name located on both sides (port and starboard) of the ship?
3
Why didn't the Cylons just build a new resurrection hub?