I see plenty of (sometimes good natured, sometimes snide) comments that any content that used to be EU (C-canon) is not longer "canon" at all.

Now, personally, to me this treatment seems incorrect, in that Disney seems to treat the former-EU C canon (aka Legends) the same way Lucas Empire always treated it, which is by declaring it as a lesser level of canon as opposed to not canon at all (see details below).

As such, I think the only way this disagreement can be conclusively resolved is by explicit statement of Disney stating that Legends material is "not canon at all, as opposed to different, lower level of canon the way C - or even S - canon always was".

So, my question is: Have Disney ever made a statement calling Legends "not canon" as opposed to "old canon" or "lower level of canon" or simply "Legends/EU"?

As to why I think they treat Legends basically as a C+S canon (and thus why calling it "not canon" requires a proof from Disney that it isn't, in the face of evidence below), it's because:

As such, it seems to me that what they are doing is, instead of calling former EU not canon, they are simply re-juggling canon levels to simplify their business/creative process, by simply creating 2 levels of canon: Main canon (GL created stiff plus anything created and/or licensed by Disney); and Legends canon (all other non-GL previous licensed works).

Yes, on her twitter account dated April 25th 2014, Lucasfilm Senior Editor Jennifer Heddle stated that all EU properties that predate the deal with Disney are "non-canon" (her words). 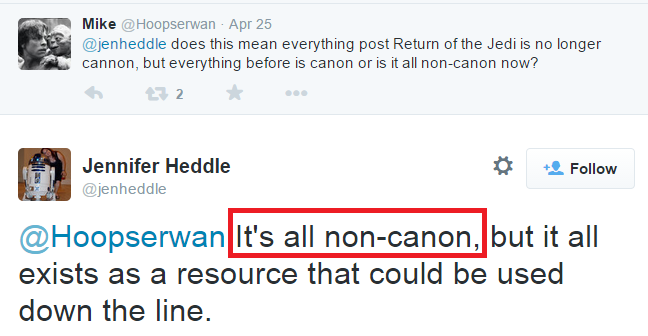 This aligns nicely with the previous press-release from Disney that stated that the EU does still exist (and can be drawn upon) but not as part of the main canon :

He [(Lucas)] set the films he created as the canon. This includes the six Star Wars episodes, and the many hours of content he developed and produced in Star Wars: The Clone Wars....On the screen, the first new canon to appear will be Star Wars Rebels. In print, the first new books to come from this creative collaboration include novels from Del Rey Books.

Obviously there are still some niggling exceptions including the novelisations ('canon unless contradicted') and certain unreleased scripts but these are relatively small potatoes compared to the vast quantity of EU novels and comics that have to be dealt with.

Not the answer you're looking for? Browse other questions tagged star-wars canon disney or ask your own question.

31
What is the singular source of Star Wars canonization?
4
Are the Marvel Star Wars Legends comic books canon?

4
Are the new Disney-canon books aimed at a younger audience than before?
37
What Star Wars Legends (EU) content has successfully become a part of Disney canon?
13
Will Disney Allow New Star Wars Legends Books?
5
How aware were the makers of The Force Awakens of Legends/EU Canon?
18
What Legends material did The Force Awakens explicitly contradict?
10
Did anyone at LucasFilm acknowledge specific cases of borrowing from EU/Legends?
3
Given that Grand Admiral Thrawn was first seen in the LucasArts game 'Tie Fighter', is he canon?