Story Ident : A barrier isolates Earth from space and slows down time

I'm trying to recall the name of a book I read, probably published after 1990, where alien AI infects satellites and a barrier is established, isolating earth from space that maybe slows down time inside of it, relative to the passage of time outside.

Mars or the moon is also colonized in an attempt to flee the now real possibility that the sun will become a red giant and wipe out humanity in the not-too-distant future (as perceived on earth), but the colony gets one of the time barriers as well.

The story focused more on the human cost and followed one particular family, one member of which was somehow also partially infected by the alien AI, but I don't remember as much about them.

This is "Spin" by Robert Charles Wilson.

Two alien satellites take up orbit over the poles and create a barrier around the Earth that appears to speed up time. An attempt is made to colonise Mars in the hopes that this can be used as a base of operations to study the Spin and maybe work out a way to remove it. 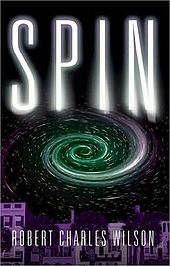 Although the book isn't "the (something)", the characters do constantly refer to it as "The Spin" throughout.

21
Novel(s) based on humanity fleeing from Earth and regressing to a pre-industrial state on a Colony so as to escape detection
9
Story ident : Lesbian space trader
5
Short story where aliens colonize earth, a boy is made immortal and separated from family
11
Scifi short story. Alien makes first-contact with humanity but finds us overly obsessed with sex
11
Web story about aliens who twist humans into various sub-humans
13
Post apocalyptic sci-fi book where Earth is destroyed and humans from the Moon and Mars go on a rescue mission