What is the population of the Star Wars Galaxy?

I am unaware of any canon where the numbers are estimated except in the trillions. I am looking for a more exact number (e.g. 900 trillion). I'm especially curious because of the mention of hundreds of trillions of dead sentients in the Yuuzhan Vong war and similar discreet statements.

How many sentients are there in the Star Wars Universe?

According to the endnotes for the Star Wars : The Essential Atlas guide, the population of known space is approximately 100 quadrillion sentients, a figure they seem to have reached by factoring in around 50 million populated worlds, each with an average of two billion inhabitants as well as a few mega-populated worlds like Coruscant (1 trillion) and Geonosis (100 billion).

Assuming known space represents 25% of the galaxy, we can reasonably extrapolate the total figure for Galactic population to be in the region of 400 quadrillion, give or take.

Speaking of numbers, the basic numbers for the Star Wars galaxy have wandered a bit too much over the years for the Atlas's take to satisfy everybody. A galaxy 100,000 light years across containing 400 billion stars became the baseline in the years before the Atlas - see, for instance, the New Essential Guide to Alien Species. The 2nd Edition Star Wars Roleplaying Book from West End Games is the most-specific source about the extent of civilization. It says that at its peak the Republic included "over a million member worlds, and countless more colonies, protectorates and governorships. Nearly 100 quadrillion beings pledged allegiance to the Republic in nearly 50 million systems." Shatterpoint is similarly specific, stating that the Republic has 1.2 million member worlds and the Confederacy of Independent Systems 1/10 of that number - which would be 1.32 million member worlds between them. But that's during a time in which Republic authorities has broken down in much of the Outer Rim and Hutt Space has swollen to include worlds as far coreward as Gyndine. The numbers used in the Atlas chapter were arrived at by postulating that the Empire reclaimed much of the lost Republic territory and incorporating the WEG portrayal of the Empire as having dramatically stepped up exploration and colonization. 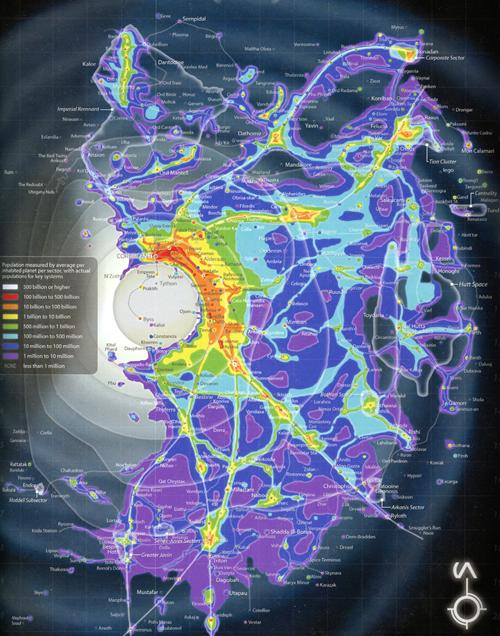 According the the various EU novels that follow on from Empire Strikes Back, the Vuuzhan Vong invasion is supposed to have killed around 365 trillion sentients. Although this figure sounds dramatic, it actually equates to less than .1% of the total galactic population.

Note that all of these figures are extrapolated from the Essential Atlas, Star Wars RPG and earlier atlases, none of which are now considered "canon" within the new Disney/Lucasfilm regime

Had the same question. Star Wars has often suffered from disparities of scale and other continuity issues, which the fans do their best to reconcile.

IMO, I would assume much sparser populations, to make things manageable. Galaxies are certainly large enough to host unimaginable populations, and the spacefaring history in Legends at least ranges 30,000 years to far earlier than 100,000 years previous, so its more than possible to be >400quadrillion. Given rough estimations, exponential growth is great that, even with incredibly slow <0.1% population growth (i.e., pop doubles every 1,000 years), you can quickly find that, given no frequent vast depopulations and no physics impediments that would prevent colonizing the universe, the known universe could be completely populated with all speculated habitable planets at a density far higher than Coruscant's proposed 1Trillion within 40-80,000 years (this is one reason I think there either may well not be other sentient life comparable to ours, or the physical impediments are simply too great).

To bring back down to the level of the movies, to even conceive of the scale where fleet engagements and group actions as shown might possibly have any impact, you really need to imagine as small as you can fit within canon statements.

So I'd take the minimum number of inhabited "worlds," figure most of them just have tiny colonies or outposts. The member worlds may be larger, but still parochial, even by modern earth standards. Only a few hundred or thousand reaching into the billions. And the "unknown space" is largely unpopulated.

Consider that 10,000 Jedi, while they were seriously understaffed and stretched, still managed to have a meaningful impact on the galaxy. Also that an Imperial Star Destroyer cost more than the GDP of some star systems (and cost figures in Republic credits thrown out there are under 4 billion, perhaps making it similar to our most expensive aircraft carriers). It would be a pretty tiny system, population-wise, whose GDP would be less than 400 billion "credits," let alone 4 billion, if Luke and Obi-Wan on could scratch up a few thousand to pay Han for a ride. To make the economics meaningful, you'd have to say that most systems were quite sparsely populated (a few million), and still jack up the price of the ISD by a factor of 10-100 (40billion GDP would be produced by 4 million people making 10,000 credits a year).

And if you don't, suddenly even the Imperial Star Destroyer isn't that big a deal. Financed across the years, many tens of thousands of them could be zipping about -- and so could their opposition. The Battle of Endor would be a minor skirmish, and the Death Stars and Super Star Destroyers would be only somewhat more significant undertakings. (Some sources seem to recognize some of these scale problems and I've even seen that one claimed 25,000 ISDs at the height of the Empire--which only lasted some 20-30 years, btw--which comes closer to fixing the scale but sacrifices the story impact; I've more commonly seen something like 500-1,000 star destroyers mentioned.)

So, beyond the theoretical carrying capacity of the galaxy, you've got to consider the story impacts most of all, and do your best to reconcile mentions of # of worlds, economic costs, populations, etc.

And really, doesn't an average of "a few million" people in population seem right, for a single Star Destroyer to terrorize and dominate a planet, with its <30,000 crew, <10,000 ground troops, <100 fighters, and <200 turbolasers and ion cannons? And wouldn't many planets, like Jakku and Tatooine, feel more proper on the sparser end of that? Even Naboo felt sparsely populated to me. Sure, these are offset by the Core Worlds with billions to even hundreds of billions (and whose economies might be considerably more inflated).

And and btw, given that a common population statistic on Earth claims that our 7 billion or so could live on common suburban lots and only cover the state of Texas, for Earth to look like Coruscant, whose whole surface is supposedly covered in cloud-touching stacked cities, we'd probably be accommodating far more than 100 Trillion people.

12
How big is the space faring population in Star Wars?
77
How was construction of the Death Star(s) kept secret?
32
Wouldn't creating millions or billions of clones for the Republic's armies create enormous and weird disturbances in the Force?
39
Why was Naboo important enough to have a seat in the Senate?
19
How does Coruscant get food?
15
What is the most widespread/numerous alien species in Star Wars (other than Human?)
6
If Life creates the Force, then wouldn't the Death Star reduce the Emperor's Force powers?
12
Why are humans the most populous race in the galaxy?
11
How was the design and creation of the clones' Starcraft and equipment commisioned and kept hidden?
5
How much did the average citizen know about the Force and Force-Using Organizations? (Canon or Legends)
See more linked questions