Did Data murder B4?

Since Data overrode B4's personality, would it be fair to say that Data murdered B4 to ensure his own survival?

Murdered is an extremely harsh word for what happened.

DATA : Captain Picard agrees that the B-4 was probably designed with the same self-actualization parameters as myself. If my memory engrams are successfully integrated into his positronic matrix, he should have all my abilities.

GEORDI : He'd have all your memories too. You feel comfortable with that?

DATA : I feel nothing, Geordi. It is my belief that with my memory engrams he will be able to function as a more complete individual.

suggesting that they might both be co-habiting the same body or functioning as a gestalt entity, albeit with the Data personality in primary control: 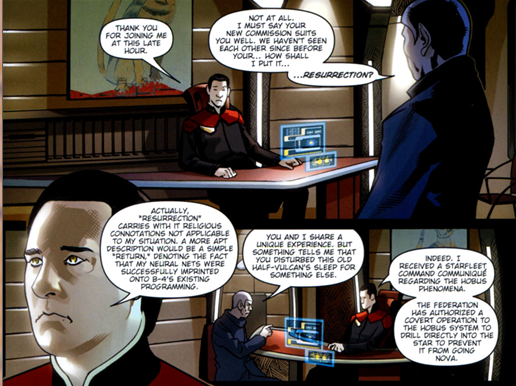 intelligence, self awareness and consciousness.

B-4 certainly lacks intelligence, his self-awareness is limited (he doesn't understand that Data is dead) and he shows no obvious signs of consciousness other than an almost pathetic desire to please. You can't murder a machine.

The key part of murder is intent which is what I wish to explore. The question really is, did Data intend to 'kill' B-4?

In Nemesis, Data uploads his memories into B-4. Memory Alpha describes it as follows:

Data willingly copied all of his memories to B-4, hoping that the added experiences would help B-4 to expand beyond his original programming

This certainly isn't described as though he had the intent to kill him.

From the transcript of Nemesis:

DATA: I feel nothing, Geordi. It is my belief that with my memory engrams he will be able to function as a more complete individual.

DATA: That might be so, but I believe he should have the opportunity to explore his potential.

Again, this sounds a lot to me as though Data didn't intend to necessarily overwrite B-4's memories, but to enhance him, to improve him as a fellow android to a level comparable to Data.

I don't think it was really ever Data's intention to 'kill' B-4 at all; it seems more to me his intentions were pure. After all, Data's memory banks aren't completely filled, so it was reasonable to think that B-4 may also have had sufficient room for storing Data's memories without wiping his own.

Think of it as providing a larger dictionary of reference material to an older computer. If the computer had enough storage capacity to store the new reference material then you can do more with the old machine. We still use RS232 interfaces in robotics, we just use them better now because we know more. He wasn't trying to kill him. He was trying to give him a much needed upgrade. He wasn't 200 years older than DATA, and this is the future we're talking about here.

60
Did Data murder Lore?
12
Is there any information about Data after Nemesis?
23
How much of Data's identity depends upon his hardware?

54
How is Data powered?
13
Why did people think Data was a Frenchman?
23
Why does Data go to sick bay?
19
How does Data speak?
23
Does Data truly care about anything whatsoever?
60
Did Data murder Lore?
29
Does Data *smell*?
23
How much of Data's identity depends upon his hardware?