On Christopher Tolkien's map of Middle-earth, one feature has always caught my eye, and to my knowledge has never been explained: The mass in the middle of the Sea of Rhûn: 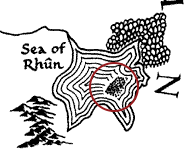 Has this ever been talked or written about? Is it an island? Is it a rocky outcrop? Are they supposed to be trees? Sand? Marshes? Whatever it is, it appears to be very deliberate.

What is this feature in the middle of the Sea of Rhûn?

As far as I remember, there isn't any name for it. It is an unnamed island.

The LotR Wikia says the same:

Also, it must have been wooded. (thainsbook).

There has been a similar discussion on TheTolkienForum. A user contacted The Tolkien Society with the question, and here is the answer:

Hello. Sorry about the delay. A staw poll revealed that in a very early version of the map, the Sea of Rhun had a large island in the middle. (Unfeasibly large, given the scale of the Sea, which is very big.) By the time the map hit publication, this had vanished and the dots appeared.

Those who have looked carefully at the various maps point out that there are similar dotty effects at the Mouths of Sirion and near Balar (Silmarillion), and references to "sands" in the Sil. The dots in the Sea of Rhun (on scale) could quite easily represent a constellation of small islands, but are more likely to mean sands, swamp or sand bars. (Actually small islands would make better geography on that scale.) There appears to be no actual reference to what is going on there.

There is a discussion of this also at TheOneRing.net which adds some details worth having. I don't however understand Quickbeam's reference to CRT "finding later manuscripts etc." as CRT drew up this map in co-operation with JRR while JRR was still alive and well and writing the books - there have AFAIK been no revisions by CRT to these maps on the basis of stuff he found after his father's death, when he started editing the unpublished mss. Indeed, it would be against his whole attitude of respect for his father's decisions to start "editing" LotR material subsequent to publication. I have asked QB what he means, but have not had a reply. As this was some time ago and you are waiting, this is my conclusion!

I would say "be careful of taking any craft with deep draft through these waters. You may get stuck."

Which, TBH, doesn't add much more than that there is no name to the island.

The discussion Helen references may be worth quoting for posterity:

I’ve been wondering about this for years, and now have found a few bits of evidence in the History of Middle-earth Volume VII that gives us a better clue.

Most all of the maps we see in today’s editions of LOTR come from the hand of Christopher Tolkien; redrafted from his father’s originals. Professor Tolkien altered and added to his maps as his work on the story progressed. His original working map (the "First Map") was a conglomeration of sections and glued bits of paper that he fussed with for many years: "It represents an evolution, rather than a fixed state of the geography." There was a later version called the "1943 map" that Christopher created.

Comparing these two maps, Christopher points out a well-forested island his father drew in the middle of the Sea of Rhûnaer, which would later be called the Sea of Rhûn. "The island in the Sea is coloured green on the First Map, and on the 1943 map is marked as wooded." That’s your island right there, but in later maps it seems to have vanished, replaced with an array of dots.

I don’t know exactly why Christopher changed it, but I suspect that later manuscripts and maps he found showed the removal of the island. Perhaps the discrepancy caused him to leave the dots to indicate what was a "questionable area."

This seems to be the clearest answer, if still vague.

It is a wooded island. The dots are trees.

Tolkien Scholars Wayne Hammond and Christina Scull note that this is a wooded island, and that due to the small scale of the map, the dots are trees.

On the general map of Middle-earth a wooded island is marked within the boundaries of the Sea of Rhun: at so small a scale, its trees appear only as dots.
The Lord of the Rings: A Reader's Companion - Appendix A

In The History of Middle-earth, Christopher Tolkien (who drew the map), notes that it is an island, and describes how it looked in Tolkien's original map (the "First Map") as well as in an earlier copy of it he had made (the "1943 map").

The island in the Sea is coloured green on the First Map, and on the 1943 map is marked as wooded.
The Treason of Isengard - "The First Map"

Christopher also includes a cleaned up redrawn version of the first map. 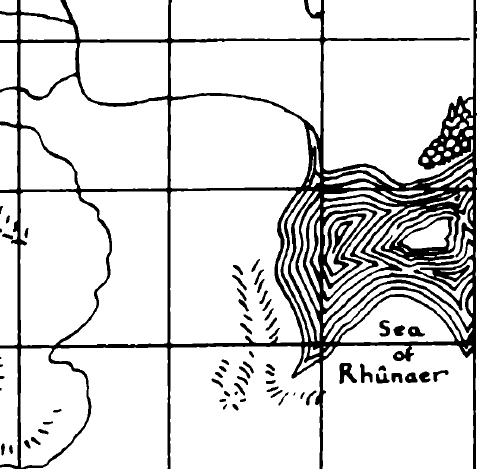 The first map itself has since been published in Tolkien Maker of Middle-earth (there's a nice close up on the endpapers), and the color green can be seen. 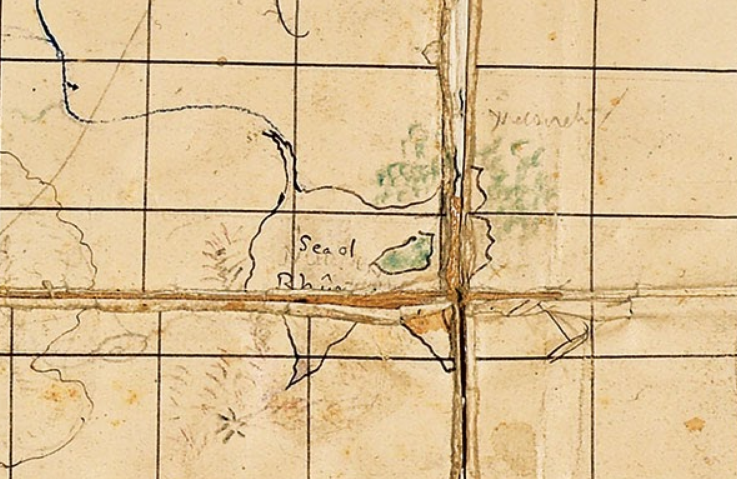 The 1954 map included in the first edition of LotR was completed in haste. Christopher Tolkien was brought in almost literally at the last moment to produce a single colour line map for the printed edition. Not surprisingly, there were errors and short cuts taken in the process to complete the map. The presentation of this island was one of those. There should be a forested island there.