I have been trying to locate a book that my brother read in the 90s.

All he can remember is it has a robot traveling to Stonehenge as well as Excalibur, Merlin and trolls.

This sounds like the kids' book Sir MacHinery where a wealthy hippy inventor type (American?) and his robot move to an old Scottish castle. A local crew of fairy creatures mistake the robot for a heralded knight (vague memories of a line about the fairies reading the robot's box like "MAC... HINERY. A fine Scottish name, although I've never heard of the clan." Arr arr arr.), and proceed to drag him and his owner into adventures in a magical reality where trolls present an existential threat to the world, and Excalibur and Merlin figure prominently. I read it over 30 years ago, so can't quite recall Stonehenge, but that sounds right in line. The book cover is below. 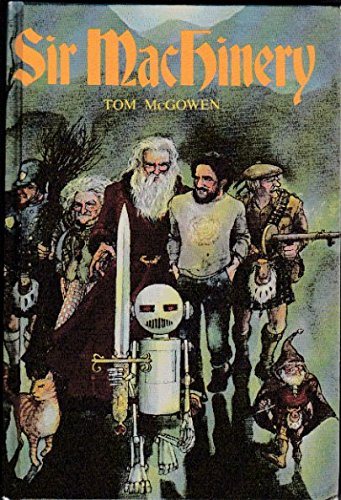 13
Trying to find title of book where a robot has a bomb in it
14
Old cartoon or anime featuring a girl protected by a Red Robot
4
TV series featuring a hovering robot
4
Don't remember a book: Merlin/Grey Side
9
Fantasy book featuring shifting doppelgangers as spies and assassins
7
90s (or earlier) Arthurian book: women training to be witches, evil Merlin and Excalibur called Caliborne