Does the Doctor waking up in a volcano have any reference to his earlier (physical) appearance?

In Last Christmas the Doctor wakes up twice in a volcanic place that is very similar to the volcano in Fires of Pompeii. 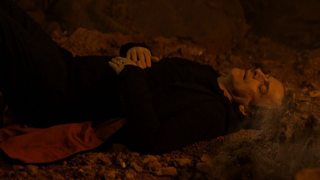 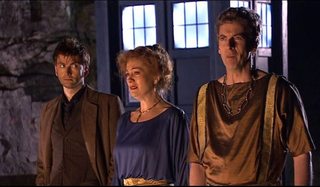 Is there any (known) significance to this? Is it used to explain Capaldi's previous appearances?

In terms of the location in "Last Christmas", It was my impression that the Doctor's location was really just supposed to be some Random Alien Planet (possibly where the Dream Crabs come from), and the lighting was set to make it look more alien. I didn't get any sense that it was meant to be the same location as the volcano ledge from "Dark Water", which as others have pointed out in comments, was itself an illusion.

In terms of Capaldi's multiple appearances in the show, it's established in "Deep Breath" that the Doctor recognizes himself in the mirror, although in his confused state he doesn't quite remember why. (Also, of course, the events of "Fires of Pompeii" are 1100 years in his past at this point, so he can be forgiven not quite remembering where he's seen a face before!).

He rants at the homeless man in the alley (the one he winds up obtaining the coat from) about how he doesn't know where he gets these faces from, and if he's trying to tell himself something by "choosing" this face, before he goes on to rant about how his eyebrows are independently cross :-)

DOCTOR: ... Er, have you seen this face before?
BARNEY (homeless man): No.
DOCTOR: Are you sure?
BARNEY: Sir, I have never seen that face.
DOCTOR: It's funny, because I'm sure that I have. You know, I never know where the faces come from. They just pop up. Zap. Faces like this one.

Not the answer you're looking for? Browse other questions tagged doctor-who dreams or ask your own question.

1
Is The Doctor (EMH) a Doctor Who reference?
8
Does the Doctor lie about his age?
11
Does The Doctor have to be white?
32
How did the Timelords give the Doctor New Regenerations without messing up the Universe?
16
Have Peter Capaldi's previous acting roles in the Doctor Who universe ever been addressed?
22
Do we already know how the Doctor gets his bodies or faces?
3
How long does the Doctor go between visiting his companions?
4
Why did The Doctor (Doctor Who) have matches in his pocket?
7
How many nasties does the Doctor keep in the TARDIS?