What does this text say, on a cover for The Return of the King?

I recently purchased a new copy of The Lord of the Rings, because my previous copy was frayed and falling apart. The new copy has the book split into three volumes, each with a unique cover.

The covers for The Fellowship of the Ring and The Two Towers each have Elvish script clearly written with Tengwar characters. However, the cover for The Return of the King has text that vaguely resembles Tengwar, but the characters are much more blocky; as such, I am having a difficult time actually identifying the characters, let alone what is written: 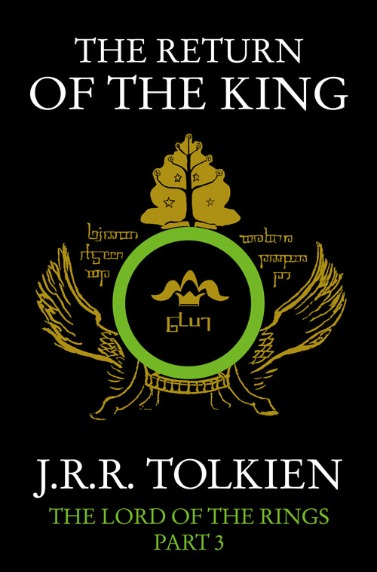 I initially wasn't sure if the cover text actually said anything, but apparently the design goes back to J.R.R. Tolkien himself, so I have no confidence he would write complete gibberish here: 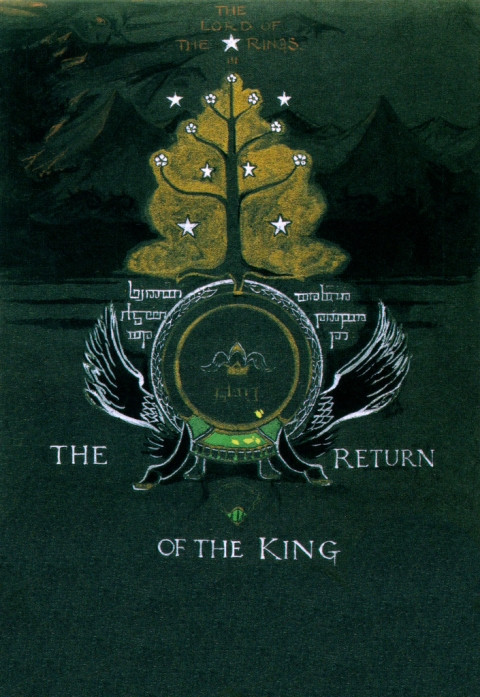 Is the text written in Tengwar? What does it say?

The Book "J.R.R. Tolkien : Artist and Illustrator" by Wayne Hammond and Christina Scull offers this information about the cover and especially the runic inscriptions:

[Around] the One Ring, destroyed in the course of the volume - is the winged crown of Gondor, 'shaped like the helms of the Guards of the Citadel, save that it was loftier, and it was all white, and the wings at either side were wrought of pearl and silver in the likeness of the wings of a sea-bird, for it was the emblem of kings who came over the Sea

With this in tengwar are the initials L ND L, the monogram of Elendil, the first High King of Arnor and Gondor. His words upon coming to Middle-earth, 'Sinome moruvan ar hildinya tenn'ambar-metta' ('In this place will I abide and my heirs until the World's end'), are inscribed in tengwar to the left and right of the throne.

Above the seat is the White Tree of Gondor with seven flowers, and the Seven Stars that were the emblem of Elendil and his heirs. Below the throne is a green jewel which repre­sents the coming of the new King, Elessar, the 'Elfstone'.

A simplified version of this design was stamped on the binding of the 1969 deluxe edition of The Lord of the Rings published by Alien & Unwin. It omitted not only Elendil's words, but the most remarkable detail of the original design above and behind the throne: the Shadow of Mordor given gigantic human-like form. The long arm of Sauron reaches out across red and black mountains, its clawed hand like the mouth of a hungry beast, sharp with teeth.

It proved impossible to adapt the design to binding stamps, and indeed even in Tolkien's original art the face and form of Sauron are difficult to make out in the upper back­ground. Fortunately a preliminary sketch [181] survives, in which the features of the Shadow are clearly seen.

Along with this description (apparently based on Tolkien's letters to his publisher) they also have Tolkien's original sketch in chalk and ink: 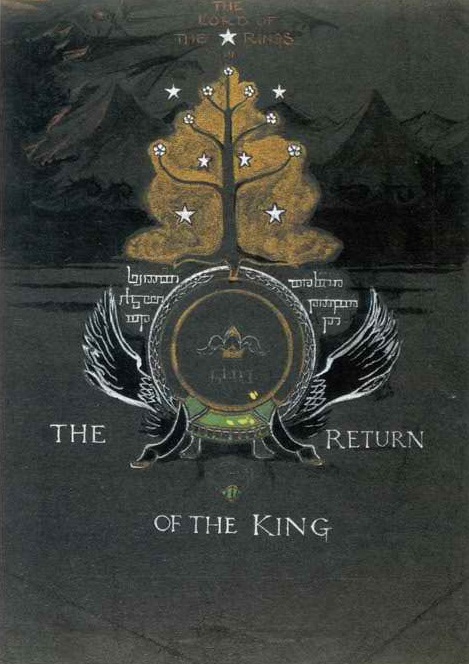 and the missing feature from the simplified version: 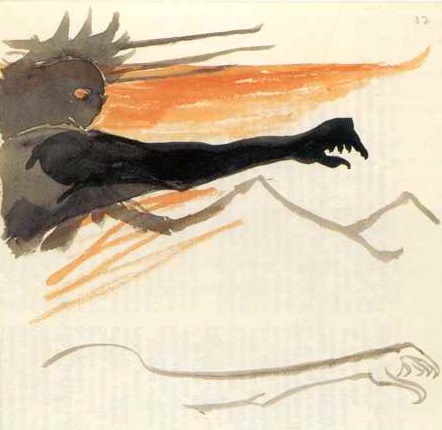 Those are "square style" tengwar.

6
What happened to Aragorn's horse in The Return of the King?
23
How much did Tolkien write about the connection between WWI and his work?
11
What is Tolkien trying to say in this letter?
16
What language was the inscription on the Doors of Durin written in?
8
What does this elvish text from UC Irvine say?
8
What does the avalanche of skulls mean in The Return of the King?
6
From whence comes Tolkien's history of the Mûmak (Oliphaunt) and its demise?