Did Obi-Wan ever take the trials to become a Jedi Knight?

Qui-Gon: Obi-Wan is ready
Obi-Wan: I am ready to face the trials.

So, Obi-Wan wanted to face the trials and change his rank from Padawan to Jedi Knight... Later, after the battle on Naboo we see Yoda granting Obi-Wan the rank of Knight after he killed Darth Maul...

The image has been altered with a CGI Yoda, but it was the only pic I found from the scene :)

Yoda: Confer on you the level of Jedi Knight, the Council does...

Since, judging by the background they are still on Naboo, should we assume Obi-Wan never faced the trials to change rank? I can see how killing a Sith Lord is a huge trial, but isn't ther any protocol in this matter?

Obi-Wan didn't face the trials. As you've stated, there simply wasn't a gap between the Battle of Naboo and his meeting with Yoda when he could have traveled to Coruscant for testing.

This is confirmed in the official novelisation:

They knew of what the young Padawan had done to save himself from the Sith Lord in the melting pit after Qui-Gon had been struck down. It took an act of extraordinary courage and strength of will. Only a Jedi Knight fully in tune with the Force could have saved himself against such an adversary. Obi-Wan Kenobi had proved himself beyond everyone’s expectations that day.

“Ready this time, he was,” Yoda acknowledged grudgingly. “Ready to train the boy, he may not be.”

“Defeating a Sith Lord in combat is a strong test of his readiness for anything,” the Council leader pressed. His eyes stayed with Obi-Wan and Anakin. “There is no doubt. The one who tested him was a Sith.”

This is further confirmed in the (until very recently) canon sourcebook; The Jedi Path: A Manual for Students of the Force where Anakin's own sidenotes state that Obi-Wan didn't have to take formal trials (and why); 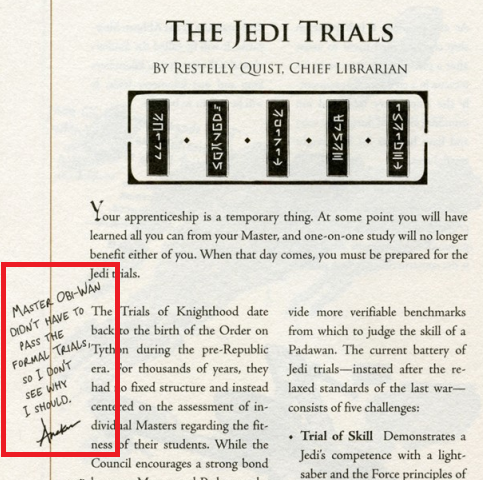 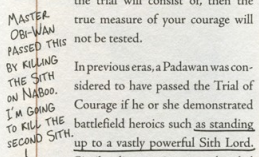 There's also a section describing the circumstances under which a Jedi Padawan can bypass the trials, especially if the missions they've been on have resulted in their being tested beyond the limits of the formal trials anyway: 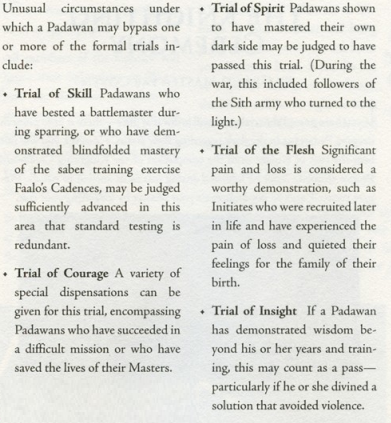 I remember reading somewhere that seeing the death of Qui-Gon Jinn and subsequently confronting Darth Maul was Obi-Wan's trial. There may have existed a formal set of trials for Jedi who's circumstances never lent to them receiving the Trials in a real-live situation - but (as rigid as they got in the waning days of the Republic) the Jedi Order did not get to the point of insisting on the formaized trials in situations where circumstances gave the necessary trials in real-life.

Not the answer you're looking for? Browse other questions tagged star-wars the-phantom-menace jedi-training or ask your own question.