I have been having tremendous luck with story identification queries, so I figured I'd ask one more while I was at it. It was a pasteboard book cover, showed a set of foreboding gates — I want to say that it showed a realistic looking boy recoiling away from them — black iron in my memories. The story involved the protagonist at a boarding school learning that a computer program housed a demon. The demon offered him a wish, but said that, if his wish was not found worthy (I don't remember the criteria for worthiness assuming it wasn't just a matter of whether it amused the demon), he would arrange an accident for the boy. Said boy knew it was not an idle threat because the demon named a classmate who had excelled, but then had a tragic accident. The protagonist made a wish regarding his family, his parents I think, and then spent the rest of the day quailing at every sign of trouble. I vaguely remember him suddenly being aware of how many swamps and ponds there were around the school and I vividly remember him insisting on wearing a football helmet when playing outfield (baseball) at the school.

Beyond that, I have a vague feeling that either the boy's or the demon's name was in the title of the book, that it was short, maybe 20-30 pages, and that I read it somewhere between 1986 and 1993. Oh, and the boy got his wish and was not killed, but I don't remember what happened after that. Part of me wants to say that the computer the program was found on the computer of the headmaster, implying that the headmaster was making judicious use of the demon to shore himself up. And there was something about a prior wish-maker being an opera singer who wanted to be able to sing the high C and succeeded shortly after her fatal accident caused her scream to hit the right pitch (I'm not certain on the accident, but I know there was an opera singer).

I did look through the bookshelves at my parent's house the last time I was home, but to no avail. Apparently, my mother cleared out a large number of books and this may have been one of casualties (it probably wasn't in the best shape, frankly. Our books were well-used, as typical with kids of that era). 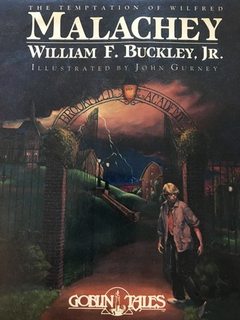 From the Publisher's Weekly review:

Buckley has written his first book for young readers, an original and urbane fantasy listed under Goblin Tales, "stories of the unexplained." The subdued colors in Gurney's pictures reflect the dark doings set afoot by Wilfred Malachey, a newcomer at Brookfield Academy. Wilfred's allowance is small, his parents sacrifice to send him to the boarding school, so he steals to pay for luxuries enjoyed by the well-heeled students. But the discovery of the goblin residing in Brookfield's computer leads Wilfred to visions of real wealth instead of petty thefts. The goblin, Omegagod, has granted fabulous wishes to a teacher whose secret the lad has overheard. Pretending he's the favored man, Wilfred asks Omegagod for a million dollars. The creature is not fooled, however, and he sets terms that terrify Wilfred even though he scales down his request considerably. There are surprises, tensions and glints of Buckley's acid wit aimed, expectedly, at his familiar targets: computer jargon (according to Wilfred's father) "could be used to make sense out of a New York Times editorial."

One of the Amazon reviews mentions the whole "wish better be worthy" deal:

He soon discovers a great secret at the school: the "Omega God", a computer that can grant wishes, but only if they are judged to be "reasonable wishes" by the computer's own highly strict moral and ethical standards. To make a wish outside of those standards means death for the wisher.

Not the answer you're looking for? Browse other questions tagged story-identification childrens-novel demons or ask your own question.