What kind of armor do men of the Night's Watch wear?

I have been watching Game of Thrones and was wondering what type of armor do the brothers of the Night's Watch wear?

Other answers are either lacking in good material or contain wrong assumptions therefore I feel obliged to add an answer.

There are two types of Armaments for Members of Night's Watch.

Highborn members of the Night's Watch often bring their own armor with them and it is allowed to use as long as it is black.

Chief examples would be the two members that we know from books i.e. Samwell Tarly and Ser Waymar Royce.

He [Ser Waymar Royce] wore black leather boots, black woolen pants, black moleskin gloves, and a fine supple coat of gleaming black ringmail over layers of black wool and boiled leather. Ser Waymar had been a Sworn Brother of the Night’s Watch for less than half a year, but no one could say he had not prepared for his vocation. At least insofar as his wardrobe was concerned.

So it is evident from this passage that Ser Waymar had brought his own equipment with him because it is explicitly said that he had prepared for his work himself when he came to join the NW.

It was soon revealed that the new recruit [Samwell Tarly] had brought his own armor with him; padded doublet, boiled leather, mail and plate and helm, even a great wood-and-leather shield blazoned with the same striding huntsman he wore on his surcoat. As none of it was black, however, Ser Alliser insisted that he reequip himself from the armory.

So here you can see Sam also brought complete armor with him when he came to the Wall but unlike Ser Waymar, his equipment was not black therefore he had to reequip from the armory.

So we can see, Highborns who bring their own armor bring the whole deal with them. The equipment listed here is:

Chainmail offers protection against vertical strikes from swords, pivoting thrusts of low intensity given by swords or spears and arrows depending on distance. Helmets protect one's head. Shields are used to block blows. Plate Armor does everything a Chainmail does but it is also efficient against high intensity pivoting thrusts. On downside, Plate Armor is heavy and affects mobility therefore is unsuitable for ranging or manning the wall. Padded doublets provide some safety from jolting impacts of blows. Boiled leather is very hard leather which can be used to protect one from blows.

In AGOT, we see Jon fighting with this equipment:

Under black wool, boiled leather, and mail, sweat trickled icily down Jon’s chest as he pressed the attack.

We know it's not his own equipment because after that he went to the Armory and put it all back there.

Also, When Jon tries to go back to Winterfell in AGOT:

He would need to find new clothes soon; most like, he’d need to steal them. He was clad in black from head to heel; high leather riding boots, roughspun breeches and tunic, sleeveless leather jerkin, and heavy wool cloak. His longsword and dagger were sheathed in black moleskin, and the hauberk and coif in his saddlebag were black ringmail.

Regarding the Helmets we see:

His [Samwell Tarly's] girth required Donal Noye to take apart a mail hauberk and refit it with leather panels at the sides. To get a helm over his head the armorer had to detach the visor.

Some members wear plate armor as well although it is unclear whether it is their personal (As they are highborn) or issued from the Watch's armory:

Thoren Smallwood dismounted beside the trunk, dark in his plate and mail. “Look at that face. Small wonder men feared them, when they first came to Westeros. I’d like to take an axe to the bloody thing myself.”

Also when Jon was climbing a mountain during ranging on Skirling pass in ACOK:

They each took a long coil of rope. Stonesnake carried a bag of iron spikes as well, and a small hammer with its head wrapped in thick felt. Their garrons they left behind, along with their helms, mail, and Ghost.

Jon was also seen once wearing a plate when Stannis asked to see him in ASOS:

He hung his mail and plate inside the armory, returned to his own cell, discarded his sweat- stained clothes, and donned a fresh set of blacks.

Now you may be wondering why do Men of the Night's Watch seem to prefer chain mail instead of a full plate armor. The reason is already mentioned above. Plate is heavy and hampers mobility which is crucial for a ranger out there in the wild or for a guard standing atop the wall.

I believe Sam makes several mentions of wearing chain mail while ranging beyond the wall.

But I would need to take some time and look it up.

I've always wondered if Jon brought black gear with him or dyed his gear when he got there.

Your question is quite unclear. On the wall, there are multiple classes of brothers:

1-Kind of civilians: Builders, cooks, maesters and assistants. This kind of brothers is not deemed fit to train for arms, and most of the cases, the masters in arms
2-Soldiers : This is the most common type of brothers on the wall, they are trained to wield a sword and perhaps use a bow and arrow. Their day to day tasks are to mount gards on the wall and engage enemy in defense of the wall. NB: the first and second category are very close, and their tasks may be confused, and some sources mention that :

Every man in the Watch walks the wall, and all are expected to bare steel in its defense, but the rangers are the true fighting men of the Watch (I: 372)

However we never heard of Sam Tarly walking the wall. So...

3-Rangers: These are the gifted unfortunate, that have joined the wall for one reason or another. They're hence given the toughest quests. Rangers often dwell behind the wall, and seldom on it. They are generally good trackers and stealth masters. They know very well their way in the land of the far north. Qhorin Halfhand and Benjen Stark are very known rangers.

Regarding the armour now that is the core of your question. The first category doesn't require one, so what they wear around is what keeps them warmest, so any kind of animal fur or skin or leather would do.(I am not taking into consideration the latest events on the wall were resources were scarce and everybody engaged in battle). Recruits of the Watch wear often

because such described wear is hard to get by and

The second category, is the one destined more for battle. However, they prefer boiled leather to any other protection. The main reason behind that is that steel is cold, and gets colder with the cold of the north, can even cause problems during long watches. The third category, is the rangers'. Well this category even though it seems to be the most danger exposed one, is the least worried about protection, for several reasons. If they go detected on their reckon missions, no kind of armour would save them. If they stay exposed in the cold with heavy armour, they'd die of cold. So they prefer skin.

This is an illustration of Qhorin Halfhand, and you clearly see the wolfskin around his neck: 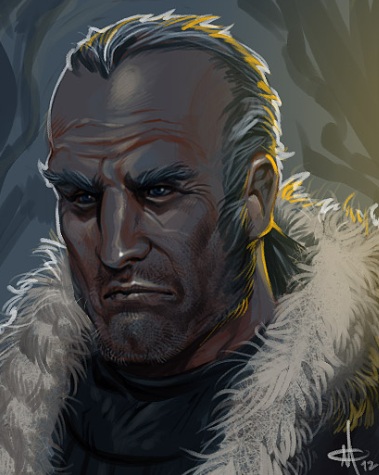 Oh, and of course, all these categories have cloaks of course, black washed out cloaks. And before I end my answer (which cannot really be considered as answer for lack of details about the question) I have to add that in order to answer this question properly, we need to study the armour of the free folks. They're more exposed to war than the black watch, and they're accustomed to war in cold. Some have bones for armour, some boiled leather, and whatever armour the brothers of the watch use, is either stolen from free folks (it goes the other way around also) either inspired by them. After all, a seasoned brother of the night watch, is very similar to any one of the free folk, I guess the circumstances change a person.

PS: I heavily relied in this answer on this excellent website.

Not the answer you're looking for? Browse other questions tagged game-of-thrones a-song-of-ice-and-fire armor or ask your own question.

8
How did the White Walkers get their weapons and armor?
11
What equipment does the 'average' Westerosi soldier have?