I picked up a book a long time ago in a library and I want to read it now, but I can't remember the name. It's about WWI except the US/UK use genetically modified animals to fight, while Germany/Austria uses steampunk machines. I think it also had pictures and involved a Prince of some kind.

This is The Leviathan Trilogy by Scott Westerfield.

Prince Aleksander, would-be heir to the Austro-Hungarian throne, is on the run. His own people have turned on him. His title is worthless. All he has is a battletorn war machine and a loyal crew of men.

Deryn Sharp is a commoner, disguised as a boy in the British Air Service. She's a brilliant airman. But her secret is in constant danger of being discovered.

With World War I brewing, Alek and Deryn's paths cross in the most unexpected way…taking them on a fantastical, around-the-world adventure that will change both their lives forever. 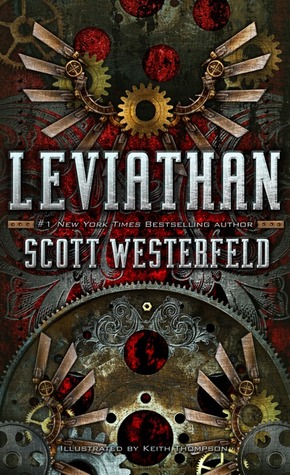 Not the answer you're looking for? Browse other questions tagged story-identification steampunk or ask your own question.

18
Steampunk novel incorporating genetically engineered animals as vehicles
7
Story about aliens discovering cave art
16
Looking for a novel involving an agent/assassin who might be a chimpanzee
14
Book about mankind entering the space age and their first contact with two civilizations in sol
19
Book series about a future where gene-modified sentient animals were used as soldiers and are trying to find a place in post-war human society
20
Film about dystopian royalty in an alternate universe
3
Book about paintings/music, students, and dead artists and a profiteering head mistress
36
A witch, a vampire and a pixie meet in a bar and talk about tomatoes eradicating humanity