Looking for a comic with a jester, the Grim Reaper and a rose

The graphical style had exaggerated ink lines that frequently overshot the shapes, giving it an edged/"corner-y" look.

The theme was mystical/fantasy-ish, with the group looking for the rose or something like that.

The story, or possibly only a part of it, was bundled in those Gespenster Geschichten (or similar) pulp horror comics in Germany.

It was neither Neil Gaiman's Sandman, nor the Dark Tower comics. These are unfortunately the only thing I can find with googling. 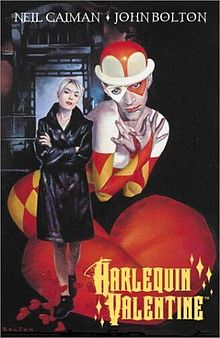 The tale begins on February 14th, when Harlequin nails his heart to the door of Missy, a woman he has decided is his Columbine. While Missy sees the heart, and removes it from her door to place it in a plastic sandwich baggy, she cannot see the capering Harlequin, who stalks her footsteps as she tries to discover the source of this rather unusual Valentine's Day present. The subsequent events revolve around what Missy does with Harlequin's heart now that she has it, while Harlequin follows her around and falls ever more deeply in love.

As you can see it contains jester-type character (the Harlequin). However, I don't recall Death, rose and hour glass.