Could C-3PO fully extend his arms?

Through all Star Wars movies, C-3PO seems quite limited in his movement. I noticed his elbow articulation even seems welded in place. What level of amplitude does he have in his arm articulation?

And why he was made that way?

I read a long time ago - too long ago to remember the source, unfortunately - that the reason C3PO and droids like him have that connector between the forearm and upper arm that restricts his movement is because it is a safety precaution.

The droids are programmed to serve, but if something went wrong, a humanoid made of metal with full articulation could pose a severe physical threat to most humans.

Constructing them so that they can't move freely prevents them from doing harm should they malfunction or rebel.

I believe Anakin built him this way because he was simply following a standard kit design.

3PO is a protocol droid series. It is designed to look presentable in diplomatic situations, talk, provide information and walk around (and on occasion, maybe present something with his hands).

The limitations could not be technological because even the early trade federation droids had more agility. Instead, the limited agility and strength seems to be a part of its design as a droid that can never attack or threaten, even in self-defense. In addition to that it may have been a cheap model. The PD-series seem to be able to extend its arms just fine!

As for episode I, it seems that Anakin built C-3PO based on Cybot Galactica's design, probably using spare parts from the same.

I think he has a fair range of articulation in his arms and legs, just not very precise control over it. Looking at a few pictures, it appears to me that his extensor muscle hydraulics should be able to move his arm nearly straight, though because of the way the flexor appears to be attached, if his arms went completely straight, he may need a bit of help starting to retract them, but on the other hand, since they're hydraulic, maybe the extensor could reverse itself and provide the necessary push.

His hips and shoulders on the other hand, look fairly limited.

We can only speculate on why Anakin made him this way (when he was 9), but it seems to me a fairly good way to make him. As Plutor mentioned in a comment, Anakin reassembled him from scratch, so it was droid designers (presumably) who made this decision. And why not? He has enough motion to do what he was designed for, translating and explaining protocol to diplomats and politicians.

Hydraulic or probably electric servomechanisms that serve to keep such type of droids from falling or other possible collisions are less precise and have slower reactions than human neural abilities.

That is why androids of that type could not be very attractive with their articulation.

Additionally the reason why Lucas made androids to look not like human exactly is that such a humanoid will not be such attractive as C-3PO do. Here is an article called Plastic People that could explain this concept. 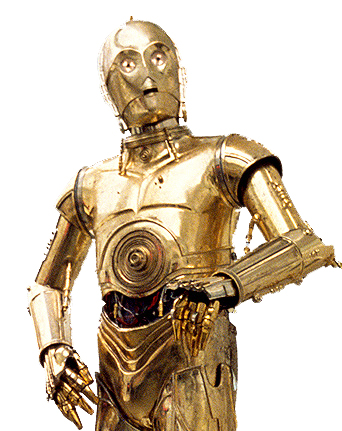 If you look at this picture, the hydraulic piston would lie horizontally next to his arm if he extends it fully. If the piston is long enough, then he should be able to stretch them out. Notice that both ends of the piston are on articulated ends that rise above the rest of the arm. If they were embedded within the arm, then he would never be able to stretch out his arms (the piston could not be horizontal). By elevating them with the articulation, the piston can lie flat, and he can stretch.

10
Is There Any Definitive List of Revisions and Retcons in the Star Wars Movies?
27
Are C3PO and R2D2 different from normal Star Wars Droids?
41
Who understands Chewbacca?
4
If C-3PO can speak “Binary” (aka: droidspeak) then why don’t we ever hear him speaking in bloops and bleeps like R2-D2 and other droids in the movies?
54
What was C-3PO talking about when he said, “That’s funny, the damage doesn’t look as bad from out here.”
21
Why did Princess Leia choose R2-D2?
46
What's the big deal about "Corellian" star ships?
15
How developed is Huttese?