How come the Vulcans were not able to detect the Enterprise in First Contact? 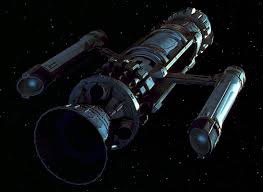 We see Cochrane, Riker and Laforge in "The Phoenix" for humanity's first warp drive launch. This action will lead to first contact with the Vulcans, who are passing through the sector at the moment the warp drive engages. The Vulcans detect the warp drive signature and decide that it is time for them to visit Earth. Just before engaging the warp drive, Data, inside the Enterprise, fires 3 photon torpedoes at the Phoenix, but misses it, which causes confusion among the Borg. Then, The Phoenix engages the warp drive and comes back to Earth the same way. A moment later, we see the Vulcan ship landing on Earth at the Phoenix launch site.

How come the Vulcans were not able to detect:

1- The photon torpedo launch seconds before the warp drive?

2- The enormous Enterprise E orbiting Earth at their arrival?

The Vulcan vessel was only passing through the Sol system; as said in the film. They have no interest in Earth, as the inhabitants are too primitive. They detected a warp signature and travelled to Earth to investigate. Now, we can surmise from this that they are not equipped or at least, are not paying enough attention to detect things happening in the inner system. The Vulcans detect The Phoenix's warp signature, not the ship itself. Neither the photon torpedo nor the Enterprise E use warp technology during this period, and since they both occur at the start-point of The Phoenix's journey, not its end-point, there's no reason for the Vulcan vessel to detect them at all.

Now, it is entirely possible that the Vulcan vessel could have detected the Enterprise E once it was in orbit of, or landed on, Earth. I would be surprised if it could not. But the Enterprise E wasn't doing anything. It was hiding behind the moon, where Worf stated that the gravitational signature would obscure their own warp signature when they re-activated the time-travel MacGuffin. Again, the Vulcans could likely detect the away team's use of transporter technology, but they were unlikely to be looking for it; they were surprised to find Earth using primitive warp technology, and the transporter is significantly more advanced.

The Crew - Riker, Troi and LaForge that is - tell Cochrane that the aliens (which we and they know to be the Vulcans) will be passing by the edge of the solar system and detect the Phoenix' warpfield. The Enterprise-E and the torpedoes are at the entrance point not the exit of that jump. The torpedoes don't explode, so no residual anti-matter floating around, and the Enterprise-E's emissions are taken care of, as Worf pionts out to Picard later:

WORF: The moon's gravitational field obscured our warp signature. The Vulcans did not detect us. --- http://www.chakoteya.net/movies/movie8.html

How that is supposed to work, I have no clue, technobabble most likely. But the Enterprise-E is significantly newer then anything the sensors of the Vulcans have seen, so it is not totally improbable that they would appear as background noise.

Little moment later is a problem of movie editing. The flight of the Phoenix is in the morning (according to the dialogue) but the Vulcans clearly land in the evening.

It is also possible the Vulcans detected the Phoenix as it warped back to Earth, many minutes later (after most of the crew is back on the Enterprise) in order to avoid any plot holes.

I think the important thing here is that the movie is taking place in 2373. They are back in time on 2063.

This means Enterprise E has 300 years of technology on the Vulcan ship. Not only that but the enterprise would most likely have the full specifications that historic vessel. Considering other technological miracles the crew can whip up on the spot, hiding from primitive Vulcans seems trivial

Not the answer you're looking for? Browse other questions tagged star-trek first-contact or ask your own question.