Was The Doctor talking rubbish?

Just before the Big Bang 2.0, The Doctor and Amy had this conversation:

The Doctor: There's going to be a very big bang. Big Bang Two. Try and remember your family and they'll be there.

Amy: How can I remember them if they never existed?

The Doctor: Because you're special. That crack in your wall, all that time, the universe pouring into your head. You brought Rory back. You can bring them back, too. You just remember and they'll be there.

Also, when did she brought Rory back? The Rory there was a plastic toy designed by enemies of The Doctor. How has this anything to do with Amy's memory? The enemies only went through her childhood books.

Was The Doctor talking rubbish after being shot by a Dalek?

No, Amy would indeed have needed to remember her parents back independently.

The reason for this is a bit tricky. Looking at Series 5 is a bit like looking at water running down a hill, but in reverse. This is largely because the series is predicated on a time-loop paradox, wherein we see the effects of things before the causes.

Technically, the universe in which the characters interact for most of the series (from "The Eleventh Hour" to "The Pandorica Opens", and all of the scenes after the Doctor flies the Pandorica into the TARDIS explosion in "The Big Bang") has actually already been rebooted. And in retrospect, there is an easy way to discern this. Consider that, after we see the Doctor fly the Pandorica into the TARDIS explosion, we then see him "rewinding" along his own timeline, showing him crossing back into the settings of a few of the first twelve episodes, including one in particular - the "Remember what I wold you when you were seven" scene in the forest from "Flesh and Stone", which "The Big Bang" reveals was spoken by the (future) Doctor as he was rewinding along his timeline. 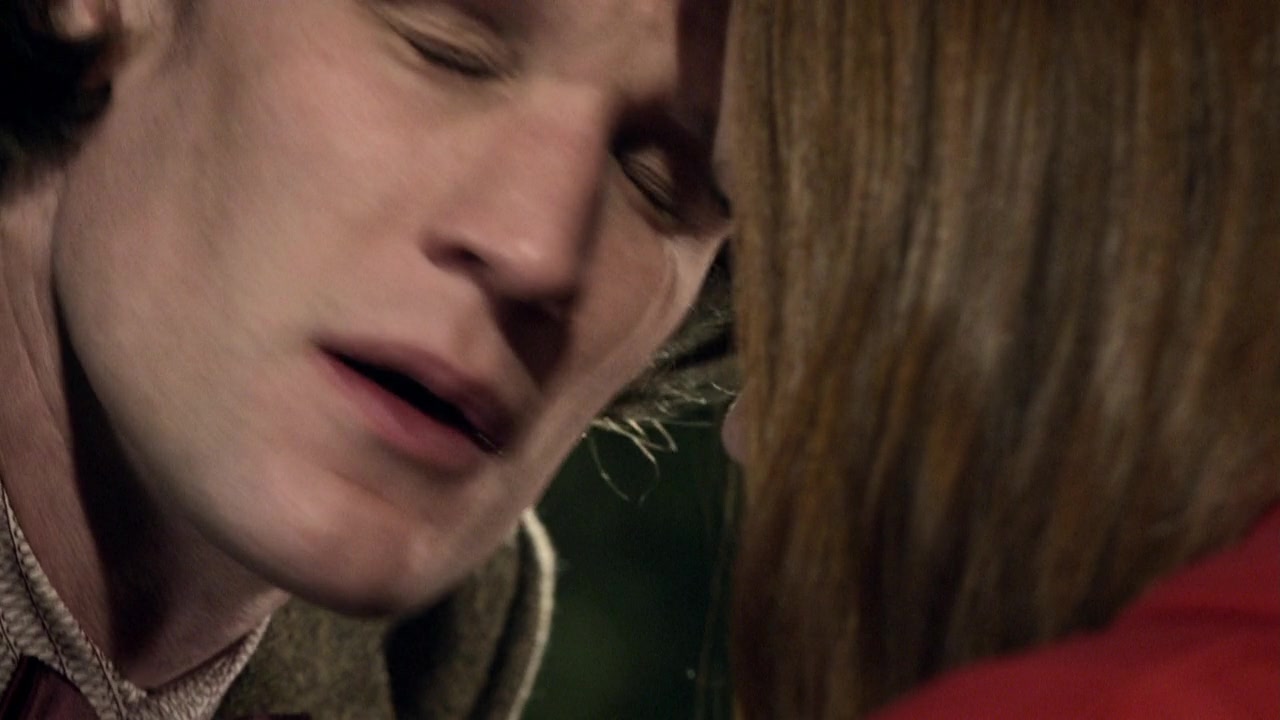 And later, even further along in his rewind, this Doctor talks to a seven-year-old Amy, and tells her that the cracks "can't close properly until he is on the other side." 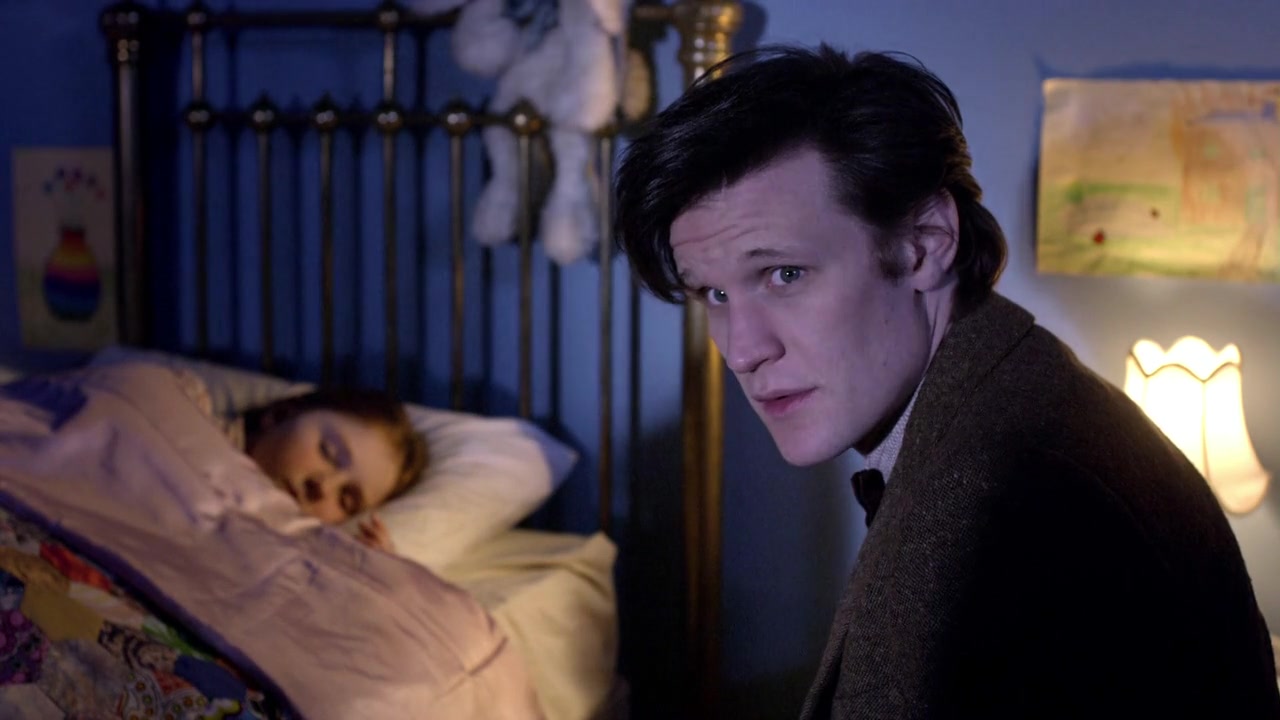 Now, consider the fact that this Doctor just flew the Pandorica into the TARDIS explosion and rebooted the universe using the atoms that had been preserved within the Pandorica - so what universe is he standing in right now? One that has been restored from those atoms - but also the same one in which most of Series 5 (and the show as a whole) takes place in, as he is clearly interacting with moments from his timeline before his TARDIS exploded.

So what this means is, the cracks are actually a remnant of the exploded, no-stars timeline with the museum, within the rebooted universe. As the Doctor said to seven-year-old Amy, the cracks were trying to close, but they couldn't until he allowed himself to be erased by one. So the time in which the cracks were active in the series is intrinsically linked to the time in which the post-reboot Doctor was experiencing his rewind. The cracks look like they precede the explosion, but really, they are the after-effects (a miscalculation that was also made in-story by the Alliance, who feared that the cracks signaled the end of the universe as opposed to its salvation). Which, consequently, means that when they erased things from existence, it happened after the universe had already been rebooted. Which is why Amy had to remember her parents back independently - sure, they would be restored by the reboot itself, but that's because everything was. But as I have demonstrated, the rebooted universe was what was cracked, and so even though her parents would have been restored, they would have then been erased by the cracks, which were in the process of closing, but were waiting on the post-reboot Doctor.

To try and simplify it a bit, let's look at it in (mostly) sequential order:

As you can see, the whole reboot ordeal comprises a loop that just goes on and on. At the very least, just be aware that for the bulk of Series 5 (and, again, the show as a whole, because the Doctor would have continued to rewind if he hadn't stepped into the crack when he did), the universe has already been rebooted by events that we just have yet to see. We're seeing the effect before the cause, on a universal scale.

Big Bang 2.0 was supposed to restore the universe using atoms from the original universe which had been preserved inside the Pandorica before the TARDIS blew up (by transporting the Pandorica into the heart of the TARDIS explosion, they would provide its 'restoration field' with so much energy that it could use the information contained in these atoms to restore the whole universe as it was--see "Update" below for quotes on this). From the transcript of "The Big Bang":

DOCTOR: How can that Dalek even exist? It was erased from time and then it came back. How?

RORY: You said the light from the Pandorica-

DOCTOR: It's not a light, it's a restoration field. But never mind, call it a light. That light brought Amy back, restored her, but how could it bring back a Dalek when the Daleks have never existed?

DOCTOR: When the Tardis blew up, it caused a total event collapse. A time explosion. And that explosion blasted every atom in every moment of the universe. Except-

AMY: Except inside the Pandorica.

DOCTOR: The perfect prison. And inside it, perfectly preserved, a few billion atoms of the universe as it was. In theory, you could extrapolate the whole universe from a single one of them, like, like cloning a body from a single cell. And we've got the bumper family pack.

I don't think it's entirely clear, but my guess would be that the Pandorica would only restore the universe to the state it was in at the moment the Pandorica had been sealed up (using things like minute dust particles or air molecules which had gotten inside along with the Doctor at the time, perhaps, or maybe even the atoms the Pandorica itself was made out of), in the previous episode "The Pandorica Opens". And in that episode the cracks had already erased Amy's parents, so without Amy using her special ability to fight against the memory-erasure caused by the cracks (due somehow to having lived in the room with the crack in the wall), it would just restore a universe where she had no parents.

Also see this answer to a related question, which speculates about how the cracks don't completely write people out of history, but instead leave some traces of their lives even though most people don't consciously remember them (though time travelers can be an exception to this, as established in 'Flesh and Stone' when Amy asks the Doctor how she can remember soldiers who were erased by the cracks).

Update: For reference, since you asked about this in the comments, here are some additional lines backing up the idea that the point of transporting the Pandorica into the exploding TARDIS was to provide energy to its restoration field--the "light" which had revived the Dalek, as Rory termed it in the earlier quote--so it could reboot the universe using the "memory" contained in the atoms inside it:

DOCTOR: The box contains a memory of the universe, and the light transmits the memory, and that's how we're going to do it.

DOCTOR: Relight the fire. Reboot the universe. Come on!

RIVER: Doctor, you're being completely ridiculous. The Pandorica partially restored one Dalek. If it can't even reboot a single life form properly, how's it reboot the whole of reality?

DOCTOR: What if we give it a moment of infinite power? What if we can transmit the light from the Pandorica to every particle of space and time simultaneously?

The Doctor then gets shot by the Dalek, but when they later find him alive and well, River continues his thought:

RIVER: The Tardis is still burning. It's exploding at every point in history. If you threw the Pandorica into the explosion, right into the heart of the fire.

RIVER: Then let there be light. The light from the Pandorica would explode everywhere at once, just like he said.

RIVER: A restoration field powered by an exploding Tardis, happening at every moment in history. Oh, that's brilliant. It might even work. He's wired the vortex manipulator to the rest of the box.

RIVER: So he can take it with him. He's going to fly the Pandorica into the heart of the explosion.

19
If Amy Pond's parents were absorbed by the time rift, how is Amy alive?
4
Why couldn't River Song's memories bring back The Doctor in the rebooted universe?

15
How did River Song know to go to Earth after the events of The Big Bang?
22
The Cracks in the Universe: Why are they lethal to some, but not to others?
11
After the events of 'The Big Bang' what is the state of Gallifrey?
3
Doctor Who: Big Bang 2.0 is driving me crazy
10
When did the crack in Amy's wall re-open?
10
Why did it have to be Amy that remembers the Doctor?
9
Why does the Doctor drive a car when he can take the Tardis?
7
Why did the Doctor have a sentimental moment at Amelia's bedside?
7
What really made the Doctor want to take Amy with him?