How did Doctor Octopus survive even one punch from Spider-Man in Spider-Man 2?

In Spider-Man 2, Spider-Man punches Doctor Octopus in the face a lot.

Since Doctor Octopus is just a normal man with robotic arms attached to his back/spine, how is he able to endure all this super-powered face punishment?

I suppose many of the people Spider-Man punches in the face aren't super-powered, so he's probably holding back most of the time.

But specifically for the movie, was this issue ever addressed?

Funnily enough someone raised this exact point on Cracked, picture #14.

The answer is: He shouldn't have been able to. No human without some degree of superhuman resistance should normally be expected to come away unscratched from a solid punch, or even a glancing one from someone as strong as Spider-Man is supposed to be. This is a medium translation error.

TALE OF THE TAPE: 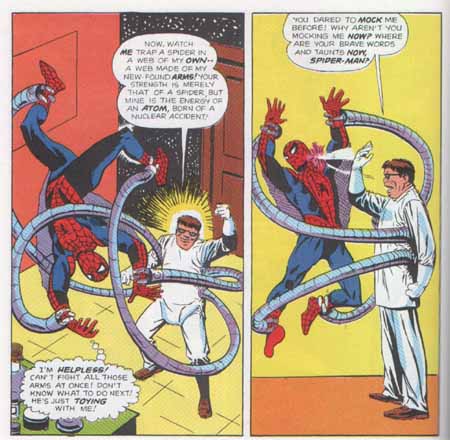 In early depictions, Doctor Octopus' arms were so fast and powerful, Spider-Man was barely a match for them.

In the comics, Spider-Man and Doc Ock sparred. A lot.

In contests between Doc Ock and Spidey, the two would almost appear perfectly matched, so much so, you'd tend to forget Doc Ock was a normal man in this fight. But if Spider-Man landed a body blow, the battle was usually over.

The eventual solution (which seemed to take almost five decades for anyone to consider) to explain how Doctor Octopus ever survived fights with Spider-Man in the first place, being a portly, middle-aged scientist, was he had some kind of low-level mutation going on giving him telekinesis and presumably the ability to not explode when Spider-Man punched him in his non-armored meaty sections. In the Ultimate Marvel comic universe, they gave Octopus an entire super-powered exoskeleton...

The Earth-616 comic writers did catch up, now that Doctor Octopus is firmly on Medicare at his age and decided the good doctor would eventually need to wear an exoskeletal harness to support his body from years of super-powered beatdowns taking their toll on him. 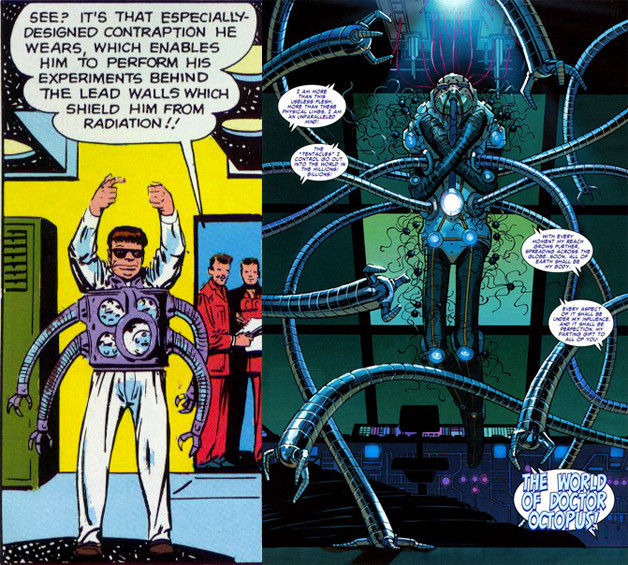 Doctor Octopus has begun wearing a full-body armor suit due to a crippling illness caused by the amount of punishment he has sustained over the years, made even worse by the fact that his ability to take damage is still at a human norm, even if he can deliver a superhuman level of punishment; he relies completely on his arms to prevent opponents with superhuman strength getting in close enough to damage his relatively unfit physical form even before his illness. To compensate, he has covered his entire body with his new suit, his normal arms are bound to his chest, and four additional tentacles have been added to his harness. He has also developed psychokinetic-telepathic control over an army of "Octobots" (small octopus-like drones).

In an ironic twist

When Peter Parker's body is apparently permanently hijacked by Doctor Octopus (you did know this, right?) Octavius learns first hand just how powerful Spider-Man is when he PUNCHES OFF THE JAW OF THE SCORPION...by accident. 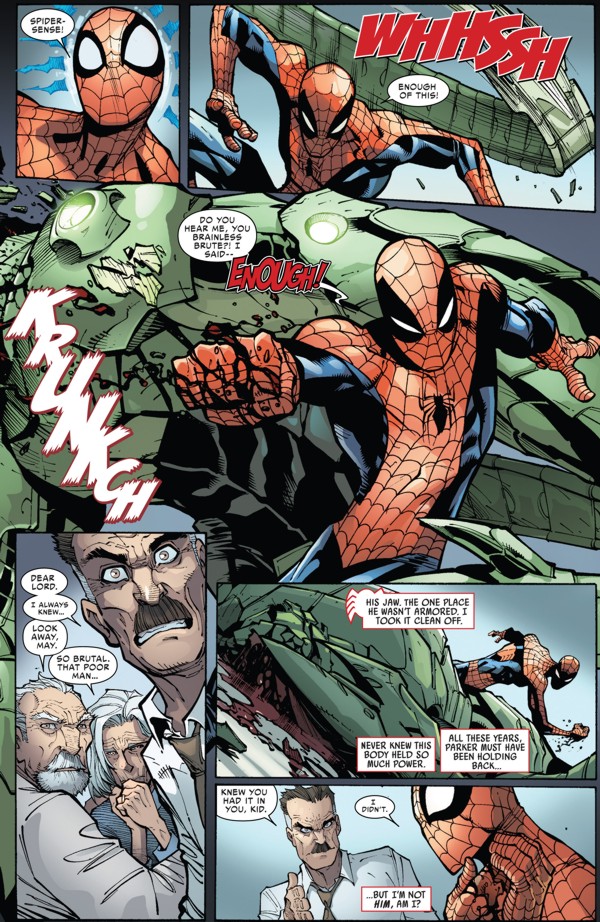 In the absence of a "word of God" explanation, we'll just have to rely on what we know about Spidey. 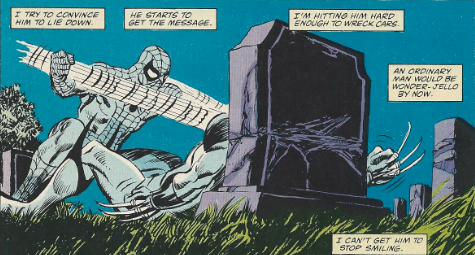 Aunt May: Oh my. What happened?

I could say that Peter must've held back, which is also true, but I still have a hard time believing that even with held back power Doc Ock simply shrugged off Spidey's punches like nothing. I'd chalk it up as "bad writing". We know that even a small fraction of Peter's power is enough to knock a person out cold, let alone getting flicked in the face by Spidey's fingers. 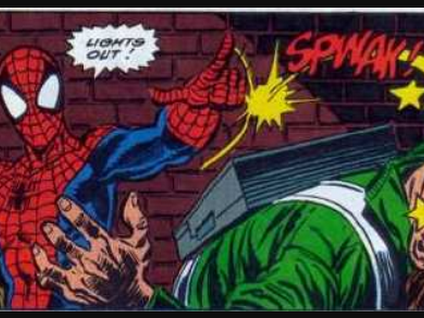 The answer is: There is none. There is no way Doc Ock should not have landed in a coma from Spider-Man's punches, let alone survive.

Doc Oc's neural interface influences his nervous system (we see the AI in his tentacles has some control over his emotions). It is possible, though not directly explained in the movie AFAIK, that it suppresses his pain and boosts his strength, like being high on speed can do.

14
Why do characters from Marvel and DC Universe have muscular physique most of the time?
9
How strong is Spider-Man?
8
How high can Spider-man jump?
5
Cases when Spider-Man punches (or attacks) without holding back

7
In "One More Day," did Spider-Man really have to make a deal with Mephisto?
23
How much web can Spider-Man produce?
3
Did The Amazing Spider-Man 2 hint a big Spider-Man movie?
3
How does Spider-Man climb walls?
9
Why did nobody stop the train during the Spider-Man 2 train scene?
11
How did Spider-Man originally control his camera effectively?
8
How high can Spider-man jump?
9
How strong is Spider-Man?
8
In Raimi's Spider-Man Trilogy, how many years passed in the storyline between each film?
8
Does any Spider-Man villain other than Dr. Octopus and the Lizard have a PhD?