Why are quarters on the Enterprise-D so spacious?

Watching TNG I noticed that nearly every crew member has very spacious quarters, which is something that does not seem practical on a space vessel.

Today's aircraft carriers house 3 officers to a room and 8 or more enlisted men to a room.

Why are quarters on the Enterprise-D so spacious and is there evidence that lesser crew members had more confined/shared living quarters?

Why the quarters are so spacious;

The TNG Technical Manual has this to say on the subject;

Starfleet believes that providing comfortable living quarters to all crew and attached personnel to be of primary importance. Indeed, living accommodations are one of the most visible displays of Starfleet's commitment to caring for its single most important "system," its people.

The living areas of the starship have been designed for maximum comfort and safety while the crew is conducting a mission. Long-term studies of humanoid cultures have confirmed that as each race embarked upon permanent occupation of space, large personal living spaces had to be established, especially on early sublight expeditions. The Enterprise allows for some 110 square meters of living space per person, in addition to community space and the areas allocated to purely working functions.

While some engineers on the Galaxy Class Project questioned the relatively large size of the vessel, opting for a smaller, more efficient design, it was conceded that the large size provided a greater number of mission options, given the changing social, political, and economic conditions in the Milky Way.

Yes, crew quarters aboard the Enterprise-D (at least for Starfleet personnel) are assigned and sized according to rank. In the episode TNG : Lower Decks, we learn that junior officers (and probably enlisted crewpersons) are required to share quarters until they reach the rank of Lieutenant.

LAVELLE : Promote me, please -- so I can make Lieutenant and have my own room.

TAURIK : If you aren't happy sharing quarters with me, then you should put in for a new room assignment. Just in case you're not promoted.

Above the junior ranks, Senior officers are provided with staterooms and at least one extra room for work/study. Picard and Riker use this extra space as separated visiting areas, Data uses his extra room as a private workspace and Troi uses hers as an informal workroom with her famously messy desk. The ship also contains "apartments" for officers who choose to bring their families on board, comprised of two normal sets of quarters combined into a single living area. 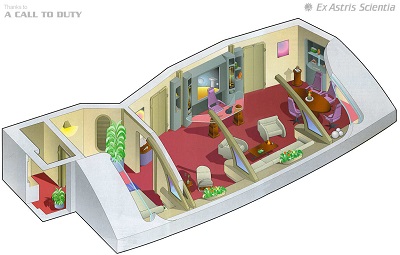 The typical U.S. Navy deployment for a submarine or a surface ship is 3-6 months. In Star Fleet, the exploration missions last for years. NX-01 ultimately completed a 10 year mission of exploration. The NCC-1701 Enterprise originally had a 5 year mission. That is a long time to be in a ship.

Crew's quarters: The majority of the enlisted crew and junior officers share quarters and bunk areas on small- to medium-sized vessels. (VOY: "Flashback") On starships of the Constitution-class, crew's quarters were structured as double suites, with private sleeping areas sharing a common, central bathroom. On starships of the Galaxy-class, crewmembers ranked Lieutenant junior grade or higher are given their own quarters while personnel up to the rank of ensign are required to share quarters. (TNG: "Lower Decks")

Since the show focuses on the officers, with the only NCO of note bring Chief O'Brien (who has a family) we don't see much of the lower ranked officers or NCO quarters for regular crewmen. Here is an image of a room with double bunks and a common area.

As ships become larger, so do the accomodations. Here is a similar bunk bed situation on the NX-01 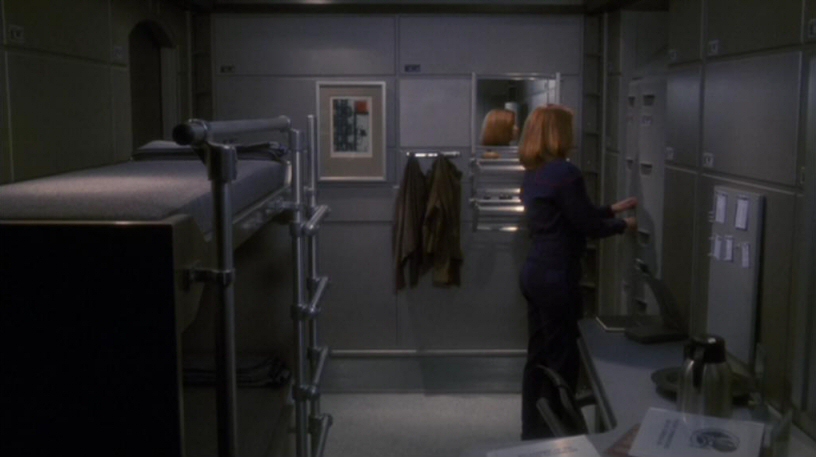 Modern warships have crew quarters that are extremely spacious compared to 18th century warships (which gave each man a space 14" wide in which to hang his hammock). Star Trek is merely extrapolating that trend into the future.

Somewhere, maybe even "Making of Star Trek" back in the 60s, Star Trek creator Gene Roddenberry was quoted as wishing to treat members of his space crew with a little more respect than one gets in the real-world navy. For the pilot episodes, the captains' quarters were designed per the producers' wishes; Kirk's was nice size, Picard's even bigger. For money reasons, those same rooms were reused when filming anyone else's quarters.

It might sound trite, but I believe the main reason is because they can. The technology of the Federation allows starships with comfortable quarters. Sure, they could have extra phasers or cargo holds in that volume, but could they power those phasers? Do they need that cargo?

So many great answers. Wanted to throw in a few. Clearly, the out-of-world explanation helps explain the reality of the situation - big sets, easier to shoot (the TNG series was filmed on some fairly large studio equipment from the 1980s, cameras with wheels and tracks and such), and generally looks more glamorous, so it fits the theme of a Utopian-like future (for humanity, at least).

In-universe the long-duration missions are used to explain all "luxury-like" accommodations included (schools, arboretum, holodecks). It is established in "Lower Decks" that not everyone enjoys large quarters but our primary characters all have a good amount of space (similar to all the Trek series, excepting maybe Enterprise).

Further, the Navy has to worry about gravity, whereas the Enterprise-D has to worry about structure. The larger those naval quarters, the more deck space, the more weight, the more furniture, etc. (just think how much space replicator functionality would save, food has to be stored somewhere). All of that mass adds up, so it's not so much that space is at a premium as it is mass. They could make bigger aircraft carriers but then they'd be even bulkier and more difficult to move, maintain and protect.

The Enterprise-D, with it's technology, just needs to form a stable warp-bubble and voila the "weight" of the thing is irrelevant. So you can afford spacious accommodations, large cargo decks, large shuttle bays (even the ones we see on camera were many times larger than the most efficient bay could imagine; ENT's shuttle bays for example) because your concern is the structural integrity of the vessel, not the weight.

The same could be said of modern spacecraft, things are tight because it's expensive to rocket all that mass into orbit. However, designs have been discussed like "inflatable spacecraft" that would allow relatively spacious accommodations. Just a matter of maintaining the integrity of the space vessel.

So, in-universe it makes sense that they'd have spacious quarters to match the rest of the spacious nature of the vessel. (Fun question)

Galaxy Class is an Explorer, to say the least, also a century since Starfleets prior vessels quarter size grew with technical complexity. As an explorer type it's got enough space (Cargo) to store several years worth of resources (spare parts, food stuffs, fuel) People just don't understand how big it is. You could have the ENTIRE 1000 person crew on a single deck. For comparisons sake a Galaxy class has 1000 crew aboard with room for families and children. Using Constitution style quarters you could fit everyone on Deck 8. An aircraft carrier holds 5500 on board (albeit the enlisted crew is triple bunked), The Titanic has room for 2000 passengers and 800 crew. 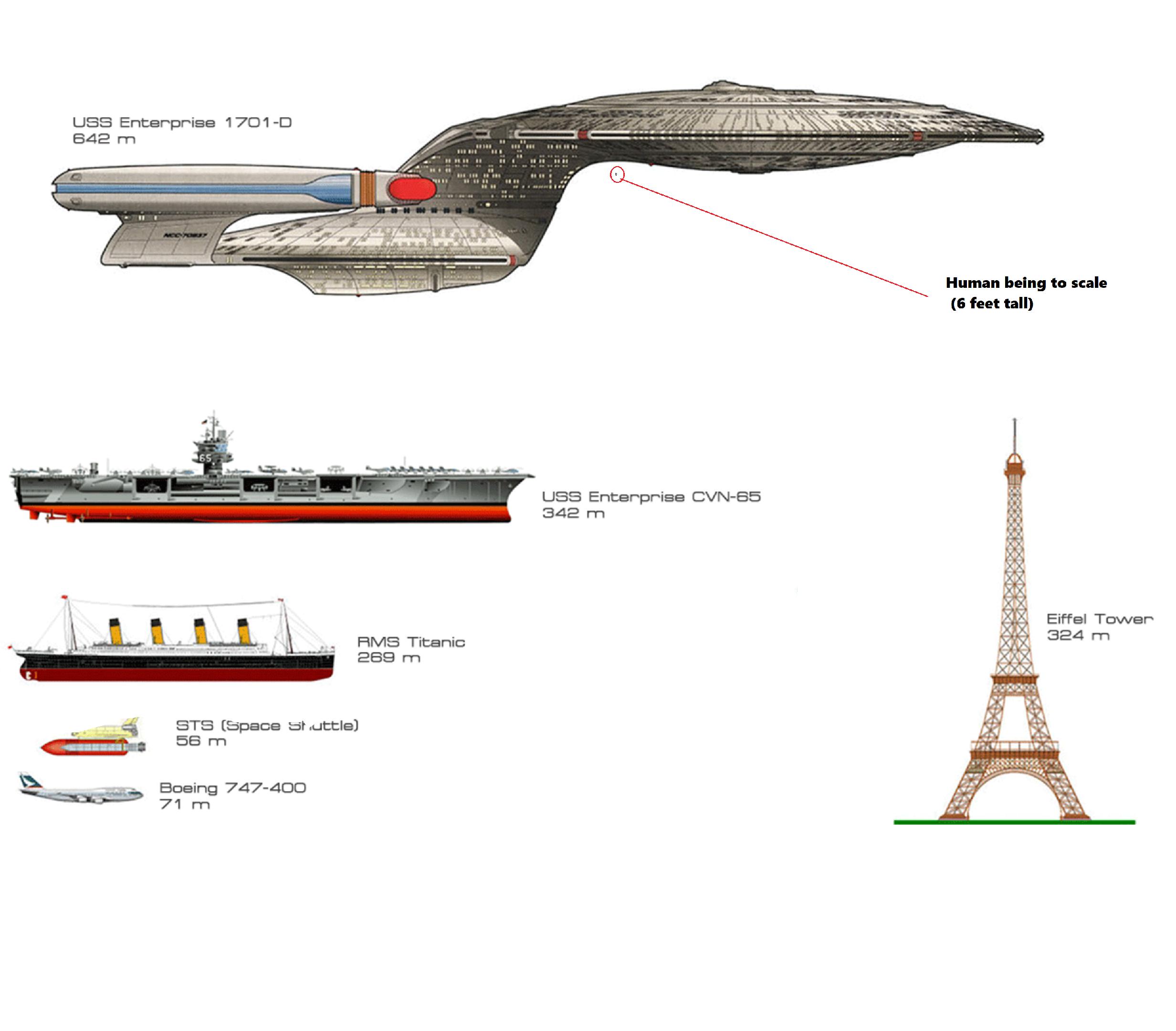 There are some pretty good answers here giving design philosophy etc. but lets just do a little rough math on the problem.

So now the enlisted crew instead of getting to share 1 room with 8 gets 12.5 rooms all to themselves. Space on a ship the size of the Enterprise D simply would not be a issue; the ship architects can give spacious quarters quite easily without compromising other design needs of a starship. Various supplements to Star Trek have shown that lower ranks do get smaller rooms then officers which is traditional in naval vessels.

On the debate about replicators being space-saving – The energy matrix required to form dishes as well as the food itself can be just as easily de-materialized and is reclaimed as 'free' energy back into the EPS system. They function on technology similar to that of transporters, but with lower resolution. Another thing to consider is waste processing and reclamation. All biological wastes are fed into a processing location where, basically, those materials are vaporized into the same kind of energy and fed into the system. If you think about it in a strictly linear sense, it's kind of 'gross'. However, it's very efficient, which means that there is less deuterium and anti-deuterium consumed to create the energy needed for the process.

In the Trek verse, Matter/Anti-Matter Reactor Assemblies (MARAs) – a.k.a. the Warp Core – can produce tremendous amounts of energy from very little matter. This is in addition to what supplemental fusion reactors aboard ship also produce, which have also become remarkably efficient and compact. A Next Generation fusion reactor could fit into your bedroom without much extra needed. Oh, and they're much safer.

Another thing to consider is that, on the matter of structure, all TNG era and beyond Trek vessels and stations have 'structural integrity fields', which are basically reinforcing forcefields that snap on when needed to reinforce materials and points of stress. Concerns for size and mass are somewhat mitigated by the usage of these fields, especially during combat or other emergency situations. Federation ships are meant to be tough, and are designed for survivability. It was stated in another answer that a five- to ten-year mission out in the black, often with little to no support, is not uncommon.

These elements do play into the consideration when considering the size of quarters.

As many other have already stated, the Enterprise D was a cruise ship attached to a military vessel. One of the key things to remember is that on the 178 episodes of The Next Generation we saw a VERY small percentage of the interior spaces of the ship. The saucer module was where the vast majority of the living and recreational spaces were contained. In the show, the saucer module was about 1000 feet across from port to starboard and 16 decks high from the bridge on deck one to the Captain's Yacht on deck 16. We only saw a small sampling of crew quarters, some cargo bays, sickbay, the transporter room, a couple of lounges and ten-forward, sickbay, and the holodeck. There were complete blueprints drawn up for the entire ship that showed schools, restaurants, and five-deck high mall/promenade, aquatic research labs, a two-deck theater, and much more. The budget constraints of the production limited what we saw on TV, but in-universe the ship was intended to be a city-in-space for over 1000 officers, civilians, and even children and spouses. The USS Voyager was shown to be much smaller but also quite spacious relative to the number of people onboard. The USS Defiant was much more akin to the accommodations of a modern naval vessel with shared accommodations for all crew and very tight interior spaces. The galaxy-class Enterprise-D was not necessarily representative of life on every Starfleet vessel.

40
Is Starfleet a military or civilian organization?
20
Why Star Trek vessels are so big, when their crew is so small?
2
On Enterprise-D, what are the accommodations for lower ranking officers with families?