Why Did the Empire Use Storm/Clone Troopers and not Droids?

The Separatists were under control of Count Dooku, who was under Sidious' control, who was essentially running the entire Clone War and using it as an excuse to take over the Republic and turn it into an empire. So when the Clone War is over and Sidious is in control of everything, he could easily obtain the battle droids the Separatists used without much trouble and a minimum of expense.

While I can understand why one would not want a 100% droid army, it would make sense to use droids when possible, since they don't need food (just plug 'em in), parts are interchangeable, and they're even more disposable than clonetroopers are.

So why doesn't the Empire use them whenever possible instead of stormtroopers? Is there an in-universe reason why the Deathstar isn't carrying clone troops or why a backwater world like Tatooine isn't left to mostly droid troopers instead of human stormtroopers?

Note that I'm talking in-universe, but since Lucas had supposedly mapped out the prequel trilogy before finishing writing Episode IV, he still could have used humans in droid costumes if he felt he could do so realistically (like with C-3P0) instead of using stormtrooper uniforms. In other words, if Lucas was already thinking of such widespread droid usage in the early stages, he could have used that in Episode IV.

Droids lack certain qualities that most humans (even clones) possess: grasping the subtleties of situations, thinking on their feet and adapting. I believe the Kaminoans touted this to Obi-Wan when they gave him a tour of the cloning facility.

There are droids with advanced faculties, but they are likely to be expensive models -- not ones that you can mass produce in the millions and deploy into battle fields. The battle on Naboo was a good example of how poorly droid soldiers fare against human ones.

Although why nobody bothered to built a battle droid with an R2 unit's brain is beyond me. That's one droid I'd not want to meddle with. There is, however, an extended universe example of a protocol droid being converted to an assassin.

From Star Wars Wikia on Droids:

Despite these advantages, however, combat droids suffered from several drawbacks. Most importantly, in order to create total obedience and foil any chance of rebellion, droid units were often crippled with extremely sub-par artificial intelligence.

I seem to recall (and admittedly, I read this in the 90's, so that makes it a dubious source) that the emperor was able to provide some cohesion to the storm-troupers by using the force — and this was so noticeable that there was commentary about sudden disorganization and chaos about the time of the Emperor's death. This would not have been possible with droids, but using regular humans would have been cost prohibitive. Clones seem like the obvious solution.

The Senate banned them.

According to the Rogue One Ultimate Guide,

This was done due to negative feeling towards battle droids following the Clone Wars. It goes on to say that a loophole was used to create the KX-series "Security" Droids, as seen in Rogue One. The same is probably true of the Imperial "sentry" droids seen in Rebels. 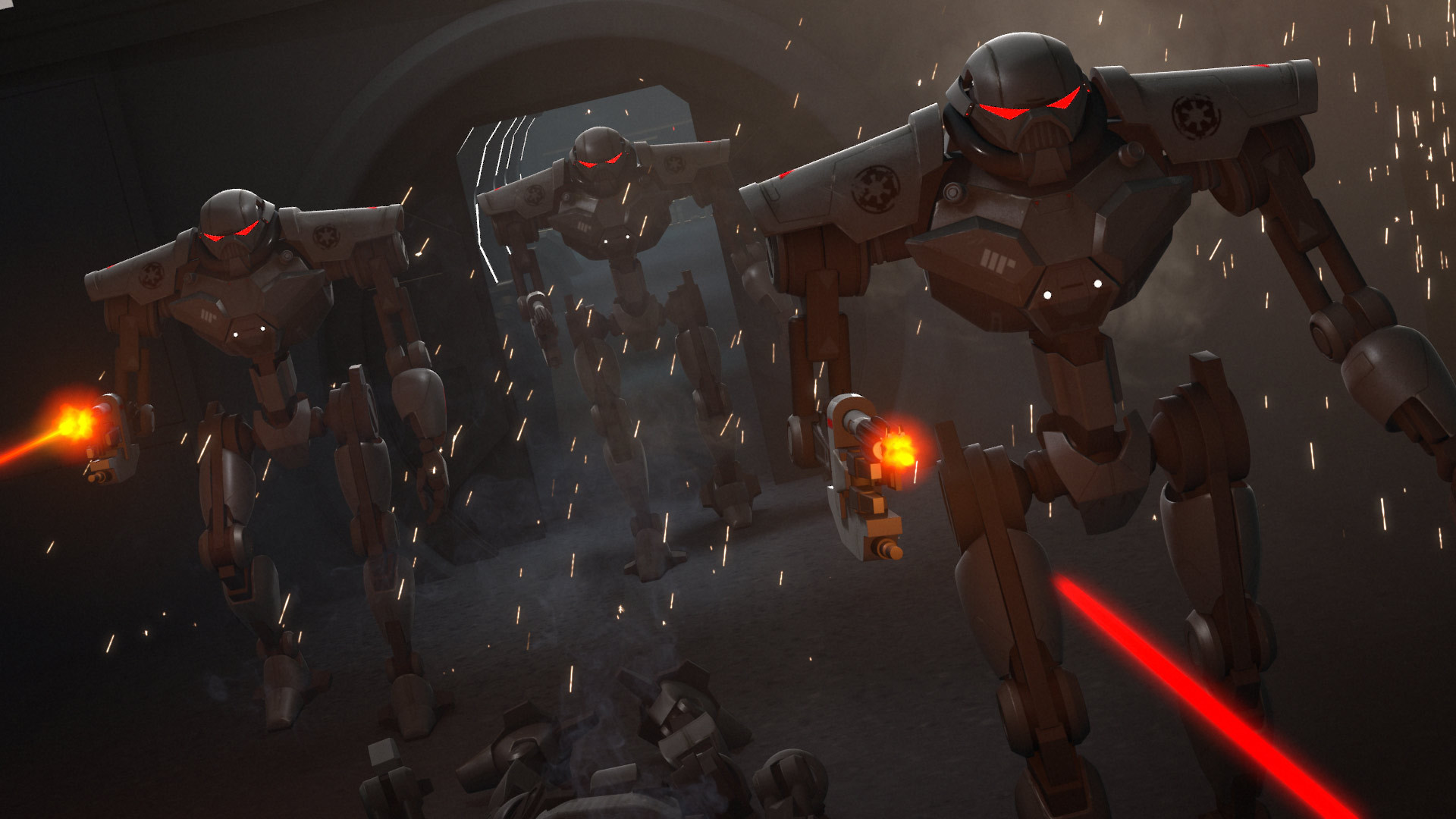 According to Star Wars: Absolutely Everything You Need to Know, this didn't stop the Empire from occasionally utilizing battle droids. 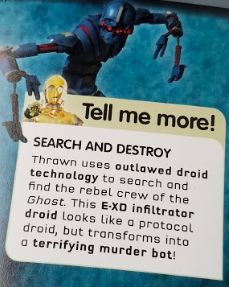 Various other Imperial battle droids also show up in Legends, such as the dark troopers, Carbonite and Incinerator war droids and Orbot Droids.

Well, the Empire wasn't really in any major wars. The Rebellion was mostly backwater, and small scale, until after the first Death Star. When you already have an army of mixed Clone and Storm Troopers why start a whole new infrastructure for droids? Most Stormtroopers functioned day to day as the international police force. You don't want a robot with the limited ability to reason or to consider the situation in that role (Also one that would require an expensive robo-brain)

Darth Vader and Lord Sidious were afraid of Count Dooku using the droids to continue his war against the Empire, therefore he had Anakin kill him off and then go on to kill off all of the Separatist leaders.

Also don't forget that the Empire still is operated by the Senate of Coruscant, which is made up of survivors of the clone wars. Therefore they probably would not want to use the same things they fought against as their allies.

As well as the people of the galaxy... Just because Emperor Palpatine became Lord Sidious doesn't mean he doesn't have to work for votes to stay in power.

I can't provide sources, but this is more of an opinion.

Firstly, if the Emperor were to maintain complete control after the crisis was averted, he would need a common enemy for all of the (Old) republic to get behind. This would be the Droids; even with his special powers and knowledge of the dark side the emperor couldn't force an entire galaxy to follow him despite the fact he's using the droids they elected him to destroy to control them.

Secondly is a complete theory, but given the humano-centric nature of the Empire, with a few very rare exceptions, notice that most of the droid-manufacturers are not human, the only exception (correct me if I'm wrong) being Dooku, who was the emperor's apprentice anyway; perhaps he favoured the clones as being a way of establishing human dominance unquestionably (despite the clones being made by non-humans, no one knew this), when the droids would've represented an alien power. You know, common enemy and suchlike. Having a vague knowledge of the species Sith, and the tension between the Sith and humans who learn the Dark Side, this would hold a personal goal for the emperor: proving that the humans are dominant, that he is not inferior to the "true Sith" in any way, for he created an empire of humans, made by humans.

Warning: this part of my argument is a stray... I'm just babbling now.

In a way, doesn't it seem peculiar that in the original three aliens are in the rebellion, whereas the empire is all human, yet in the second trilogy of prequels, both the senate has a high rate of alien life, and the separatists. It seems to me that I get a mixture of signals from this, firstly that the Emperor has tried to focus all the aliens of considerable power to the Separatist movement for extermination, so that when he takes utter control he can get rid of those less powerful but still with influence via the dissolution of the senate, and have an all-human regime without anybody catching on.

Technically, stormtroopers are not clones. The clone factory stopped producing since they ran out of DNA from Jango. So storm troopers are just volunteers who serve the Empire. And that is why they have horrible accuracy.

4
Why are Star Wars fighter ships crewed with humans and biological sapients instead of droids?
2
What's the status of AI beings in the Star Wars universe: people or property?

63
The use of 'Darth' as Vader's name, not title, in Star Wars
5
Why did Ba'al clone himself?
0
How did a Separatist tactical droid come into the picture in the Rebels' search for Captain Rex?
8
Why was C-3PO shot and not captured?
16
Why did the Separatists start planning the Death Star before the Clone Wars broke out?
19
Why did the Sith need the Clone Army at all?
3
Why is signal jamming not a common strategy against droid armies?
4
Why wasn't the Sy Bisti language programmed into any Republic or Imperial protocol droids?
4
Why are Star Wars fighter ships crewed with humans and biological sapients instead of droids?