Which Nenya ring is correct?

Which Nenya, ring of Galadriel is the "correct" one? I want to buy one to my girlfriend as an engagement ring. I mostly find this design: 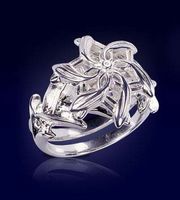 However, I found it only made of silver - not suitable for an engagement ring. Then, I found this one here: 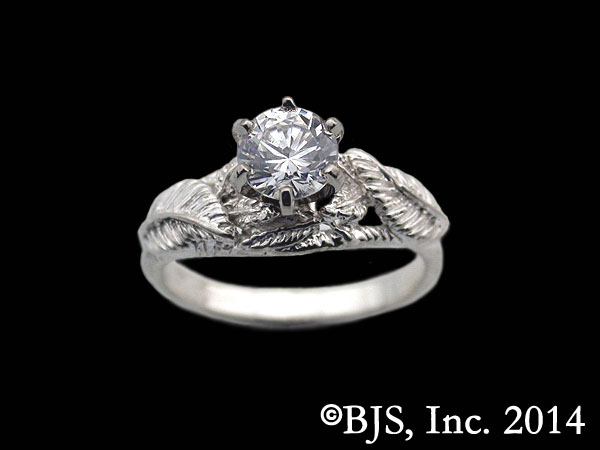 which is also offered in a white gold version and also looks more like an engagement ring. However, it looks completely differently than the other Nenya I found.

How is it possible that there are two different "original" designs of Galadriel's ring over the internet? Should the other ring be also considered as Galadriel's ring? Any advice/information appreciated.

There is no "correct" depiction.

The descriptions of the Rings in the books lacks this level of detail; first of all we have words of Saruman:

And then the description of Nenya itself:

...a ring about her finger; it glittered like polished gold overlaid with silver light, and a white stone in it twinkled as if the Even-star had come down to rest upon her hand.

So there's just not enough information there, although I'd say that the lower image is closer to the book's description.

According to the books neither of the designs is "incorrect" because there is no description in the book so specific and detailed that it will be possible to determine which of these rings is more accurate. One description of Nenya can be found in The Fellowship of the Ring, Book Two, Chapter VII-The Mirror of Galadriel, which describes it thus:

Eärendil, the Evening Star, most beloved of the Elves, shone clear above. So bright was it that the figure of the Elven-lady cast a dim shadow on the ground. Its rays glanced upon a ring about her finger; it glittered like polished gold overlaid with silver light, and a white stone in it twinkled as if the Even-star had come down to rest upon her hand.

It is also said by Galadriel herself in the same chapter that:

This is Nenya, the Ring of Adamant, and I am its keeper.

These words from Galadriel could indicate that maybe the white stone in Nenya is indeed the mythical stone Adamant but since it's not written anywhere and Tolkien have scarcely written anything about Adamant or referring to it in his books we can't know if it's true or not.

Another description of Nenya is give in The Return of the King, Book Six, Chapter IX-The Grey Havens, in which it is described as follows:

...Nenya, the ring wrought of mithril, that bore a single white stone flickering like a frosty star.

Here we learn that Nenya is made of the precious mythical metal mithril which for obvious reasons there are no rings in our world that are wrought of it but the closest metal to mithril besides titanium in our wold according to its descriptions is probably silver with mithril being called also "silver-steel" and "Moria-silver" and even "true-silver" by men although it may not be appropriate for an engagement ring. And again there is a description of a white flickering stone which is likely (although not surely) a diamond or the mythical stone Adamant.

The conclusion is that there is no "correct" design of Nenya according to the books (although there are "incorrect ones" but neither of the depictions that you have presented here falls into this category). However the first design with the flower-like pattern is identical or almost identical to the depiction of Nenya in the movies.

As user 8719 and Ofek Aman already said, there is no detailed description of the Nenya in the books.

But if you are thinking about the movies, the first one does look a bit like the one Cate Blanchett wore (bottom right one in the screenshot below).

Why do you think silver is innapropriate? According to Wikipedia:

You give her the Nenya now, and then you can give her The One for the wedding (just kidding). Or you can coat it in gold before proposing. IMO giving her the Nenya makes it much more valuable than if it was a plain golden ring. I might become bi if a geek I admired proposed to me like that.

Not the answer you're looking for? Browse other questions tagged tolkiens-legendarium the-lord-of-the-rings galadriel or ask your own question.

28
Was Frodo able to see that Gandalf wore Narya and Elrond wore Vilya?
87
Is there a hidden significance behind the fact Galadriel gave 3 hairs to Gimli instead of one?
31
Did Galadriel, Elrond and Gandalf try to heal the damage done by Sauron after the One Ring was destroyed?
9
What was the benefit of the belts given by Galadriel to 3 Fellowship members?
32
Are there differently coloured races of Man in Middle-Earth, and if so how are they explained?
40
Why didn't Galadriel take off her ring?
20
Distinguish the explanations of Galadriel's test in LotR