Fantasy cartoon with characters transforming into animals matching their personalities; evil woman transforms into a shark

I am looking for a cartoon series I watched in the late 80s or early 90s, about characters that are given powers to transform into animals of their character.

One evil character in the cartoon is called Firolina she could transform into a shark.

I believe you are talking about Visionaries: Knights of the Magical Light. It's from late in 1987, and only lasted for 13 episodes.

The clincher is the shark you mentioned; Her name was actually Virulina. 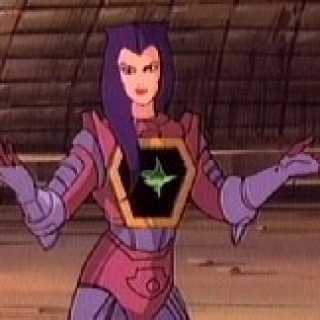 8
What late 80s - mid 90s cartoon had heroes with insect mechs?
5
Cartoon with three heroes - one strong, one fast and one that could change into animals!
3
Warring aliens transfer mind to transformer like robots in 80s/90s animated movie?
14
Cartoon series about transforming cars
4
Anime where the main character has a pet squirrel and her friends have powers activated by devices on their wrists
6
Sci-Fi cartoon series about animal versions of the Knights of the Round Table
10
Cartoon about a boy who could transform into a big blue bird and speak to animals
4
80s Mecha anime/cartoon about a giant spaceship that could transform into a humanoid robot form
6
Cartoon series: kids disappearing under bed into rectangular blue portals