Looking for a story about a new Ice Age. Explorers crossing the glaciers between New York and some other city

Along about ten or fifteen years ago I read an intriguing young adult novel with the premise that a second Ice Age had come, and buried the various cities of North America beneath a mile or so of ice. But the larger ones (New York, LA, Chicago…) had survived this and developed a bare sustainability, using nuclear power or something to maintain underground gardens and so forth. They were able to communicate with other cities by radio, but that was about it, and no one had any real idea what was going on outside the continent after hundreds of years of isolation, nor indeed much idea what went on above them on the ice.

The protagonists were a group sent out to discover why the other cities were suddenly suffering radio silence, and along the way their mission morphed into more of a "just what all is even out there, anyway?" exploration. Pretty sure they made it to, or at least heard about, the tropics for the first time, and their unglaciered temperate climes.

I have been entirely unable to search for this book effectively, since I have no idea exactly what it was called, who it was by, or even the names of the characters. Tips on managing despite these handicaps (hypnosis??) would be much appreciated, as would a solid identification of the book. (It was probably written back in the Sixties or so, when global cooling was still a thing respected scientists were worried about.)

The major themes include a new ice age and a trek across the frozen Atlantic (from New York to London) by a group of teen protagonists.

The years is 2650 A. D. Three hundred and fifty years earlier a New Ice Age covered large portions of the globe with ice. Most people trekked south or died as food ran out and towns were overcome. Those that remained in New York and the other great cities of America were able to construct underground cities before the ice covered them over. The societies underground have become increasingly isolated and insular with repressive governments. Food comes from hydroponics facilities and nuclear reactors provide the heat and energy. The cities regulate births inorder to control population due to the limited resources at hand.

The narrative follows a group of characters, and our young interchangeable hero Jim, who have made radio contact with London, also an underground city. The group is soon aprehended by New York’s authorities and after a shame trial the aged mayor sentences them to expulsion. Fortunately, they were planning an expedition to the surface anyway to make contact with London. 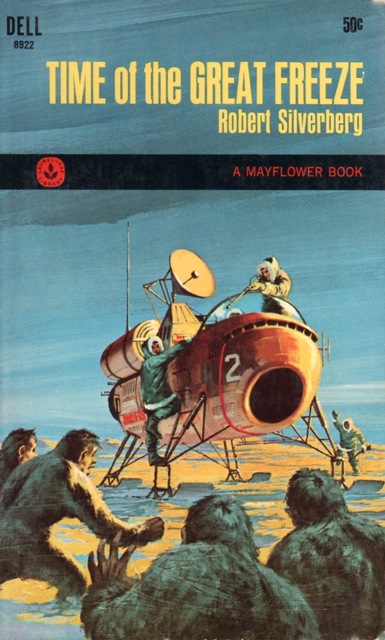 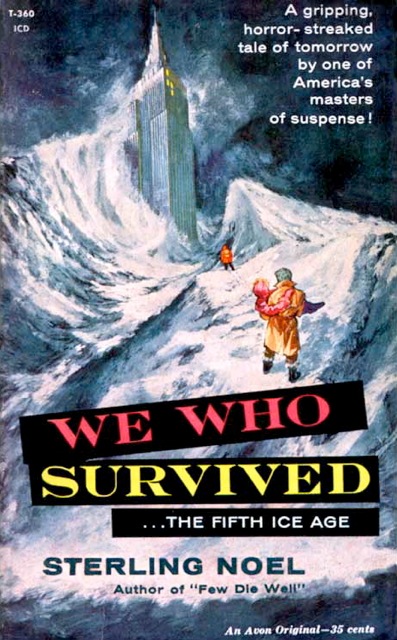 I have also been looking for a similar book that I read years ago. This book sounds promising and interesting enough to read, even if it is not the one that I have been searching for.

A huge cosmic cloud is going to cover the Earth. It’ll cause a snowstorm to last a hundred twenty-two years. Saturday September 14,2203…here it comes. Winds are over a hundred miles per hour with gusts up to a hundred fifty.

Scientist Dr.Gabe Harrow predicted it all. He heads a group at a farmhouse in Fallon, Kansas trying to survive. Helping out is his wife Elaine, former Air Force Commander Vic Savage (I’ll admit the name almost kept me away from this), his girlfriend now wife Marge and a group of engineers. Also in the mix are a couple local farmers and their three kids. One is a twenty-two year old sultry troublemaker named Georgia. Not to be forgotten is Steve Engels and his possessive mother Cora.

15
An old juvenile novel about a small group walking across the frozen Atlantic Ocean?
6
Novel about a group of scientists crossing the Atlantic on a frozen Earth
5
Pre-1982 post-apocalyptic adventure novel: People emerging from under-ice cities on earth
4
YA novel from ca. 1960s in which humans reemerge after waiting out a mini ice age underground

4
Looking for a SF story about robotic explorers who discover intelligent organic life on a planet
5
Pre-1982 post-apocalyptic adventure novel: People emerging from under-ice cities on earth
8
Aliens put a dome over New York and transport the city to their ship
5
Looking for a short story about new ice age
10
Trying to identify short story about the second ice age
19
A device that reassures its owner by telling him that he would have died if he had done things differently
8
Old story about New York City having become "Black New York"