Secret agent that also sings opera and travels through windows

I read this story about 5 years ago, but it was not new at the time. It was probably written in the 90s to early 2000s.

It was part of a series, I think referred to as the author's "Hundred World" saga. It was not the first book of the series.

I do not remember the cover.

The only details to the story I remember are these:

The main character is some sort of secret agent. He works for an organization that polices travel by these devices that allow you to step from one place to another.

At the beginning of the story, he's preparing to sing operatically for a sold-out audience, because his public identity is a world(s)-renowned singer. He prepares by drinking a special blend of tea and honey to soothe his throat.

The appearance was actually a bait tactic to lure out assassins. They appear (using the instant-travel devices, I think?). I can't remember how this scene ends.

I remember that this character's “boss” is someone they call a nickname like Chief, and Chief's history is classified. But, eventually you find out that the window devices that let you travel from place-to-place originally came from another world (maybe dimension?), and that the Chief came from this world (but was a child at the time). I remember this was supposed to be a big reveal, but since I didn't read the previous novel about Chief's character it didn't mean much to me.

I don't remember much else, aside from this book or another in the series taking place on a different planet where the government was either very religious or very picky about the language you spoke.

I may still own this book, but it's likely inaccessible in storage if it wasn't already donated.

John Barnes's ''The Armies of Memory''. Excerpt from Wikipedia:

Several attempts are made on Giraut's life as he works on his new Ix cycle of music. He is sent back to Wilson, his home planet and culture of Occitan, to complete the new music along with his Office of Special Projects team as protection. Paxa retires from the OSP and leaves Giraut after finding out she cannot be successfully backed up on a psypyx, which would make her death permanent. Giraut begins to fall in love with a fellow musician Azalais who introduces him to Ebles, a contact for rogue colonies outside of Council space which call themselves the Union. Soon after, Azalais is killed and Giraut is severely injured in another assassination attempt.

It's part of the "Thousand Cultures" series and involves "the springer", a "method of instantaneous transportation which is quickly reuniting humanity across known space." It's the fourth and final (so far) book of the series. 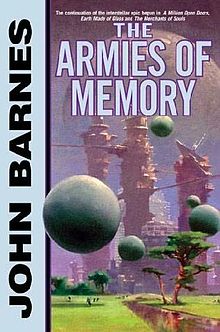 9
Secret agent working for lizard overlords travels through parallel universes
9
Earth occupation/invasion book I read in the 90s
22
I'm looking for a series I read in high school in the 90's about a world where people had one magical ability and words were literal
18
Name a book of the 80s about a group of scientist/students being transported to a parallel universe
11
Children's book about a child that falls into a puddle and travels through a dark, twisted realm
7
Book Identification: Choose Your Own Adventure style book with a dog that turns out to be a secret agent for planet Sirius