Why don't zombies eventually die in the Walking Dead?

We know the zombies have a fairly simple existence, they can only perform basic functions (like walking) and only care for eating flesh. Yet in the Walking Dead series literally years are passing since the first outbreak and these zombies are still active. Wouldn't their brains eventually die due to low glucose levels or something?

In Letter Hacks #14 and #111 it's stated Zombies eat for impulse and posess no functioning digestive system, with what they've eaten being forced out once its full, unprocessed. It's not required for their sustained animation.

Robert Kirkman wrote on Reddit: ...In the beginning of the show we saw walkers do things like using a rock to help bash the doors in or turning a door knob, is there a reason we've stopped seeing them do that?

"Older zombies are less together and capable or doing things like that. Fresher zombies, which there were more of in season one, are able to do more than older, more rotted zombies.

The worse state of older zombies holds the key; when a human starves, the body will break down fat, then muscle, followed by vital organs. The slide in mental function seems to imply the parts of the brain stem re-animated are canibalized in the process.

Since zombies do not digest, this would be how they survive, and the slower decay that stops them being a bare skeleton in a matter of a few weeks,(#9 and #11) could easily be the virus' way of preserving and stretching its 'food' source.

They would end up running out and 'starving' (in a manner of speaking), but there is no indication of how long, other than that that a surviving human would most likely outlive it, through the years, and that a zombie's lifespan would differ depeding on the individual, (#7); which makes sense, given body fat ratio, muscle density, state of organs and tissue changes from person to person.

Zombies do die off of their own accord, albeight slowly, and it happens whether they eat or not.

I'm going to address the second part of your question, since the existing answer took care of the first part. 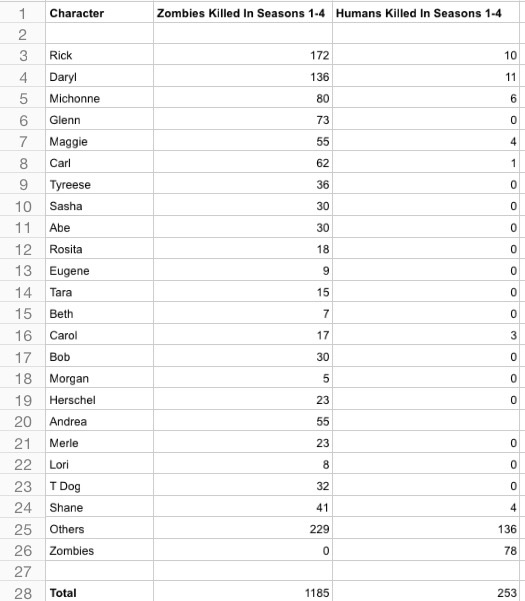 The olm, an amphibian, can survive a decade without eating while remaining mostly inactive, yet conscious. Because cold blooded animals can burn next to no calories during inactivity, we need to look at how much energy is available for useful activity.

Calories/Mile: A human being burns ~70-100 calories per mile while walking slowly. https://www.verywell.com/calories-burned-while-walking-3432716

A zombie should cease to be active after travelling 479 miles.

Zombies should logically terminate / decompose after too much time with no nourishment. The tissue on them would degenerate up to the point where they can no longer have enough of it to be able to move and then up to the point where only the bones remain, practically making them re-dead. Permanently.

If the virus prevented bacteria, molds and fungi from decomposing the host body. Then it is conceivable that a zombie's body could last for a much longer time. Look how long a McDonald's hamburger takes to decompose.

Zombies in the show should definitely die out with time. It's entirely unrealistic that they wouldn't (Assuming they don't reproduce).

The virus takes over a human body, hence no matter how potent, it still needs to fulfill the living requirements of a human to keep control over its husk.

Some people said the digestive system shuts down, that's great, it explains why the stomach doesn't eat itself, but it in no way sheds light on why they don't need food.

Zombies clearly make use of muscles to get around, they have control over the brain, which implies at least some parts of the nervous system are still being used. They also have red blood, which means the liver and heart are both there to purify and pump respectively. Blood is also an essential requirement for the transportation of oxygen (So lungs work too) to the brain, and nutrients to the muscles. It is for instance entirely unrealistic how The Governor kept zombie heads in his aquariums, which then started moving when the aquarium broke. They would have been dead from lack of oxygen, as brain cells die without it. In fact, to indulge this tangent, the fact that the virus takes over minutes and hours after death is unrealistic, as by that time the brain would have suffered considerable injury (brain cells do not regenerate).

All of this to say, human muscles require oxygen and nutrients to work, that's non debatable, hence zombies need a constant intake of food, and additionally they need a digestive system to break the food down into nutrients. Without this process, they'd die very quickly.

1) The survival of zombies is not scientifically possible for long periods of time no matter how potent the virus is that makes them animate. Since the zombies are obviously decomposing which means there is no regeneration of cell tissue which means no repair to wear and tear which means their feet should have scrapped off long time ago and subsequently the leg bones would snap and be useless for travel. Recent episodes show mummified like zombies but the mummification process would entail lots of dry heat and very little humidity - not a possibility in the southern u.s. 2) No matter how many zombies are destroyed/rendered brain dead, you must take in account the sheer numbers of billions of them. Herds migrate and even if you kill a large city full, there are more cities of them coming.

Obviously there has to be some suspension of disbelief regarding zombies, so some questions just don't have logical answers. Muscles can't work without a fresh supply of oxygen, so that means walking is impossible without a functional circulatory system. Dead tissue, left out in the open, would rot in a matter of weeks or months (you can see time-lapse videos on YouTube of various dead animals decaying).

Having said that, I would point out that Walking Dead was never about the zombies anyway. :)

In wood bury brians henchman studied the process of the walkers the best he could he is asked do they starve? N he says yes but they do it much slower then us and if your dead your rotting so over time yes the herds will dwindle in numbers