Are the imaging satellites orbiting Mars really as powerful as "The Martian" portrays them? [closed]

Ask Question
Asked 7 years, 7 months ago
Modified 2 years, 10 months ago
Viewed 5k times
23
This question was closed for being about real-world science. It is currently not accepting answers.

Please consider whether you can edit the question, or guide the asker in how to edit it, to be about in-universe explanations rather than real-world science, and vote to reopen the question if appropriate. If the question would be better suited for one of the Stack Exchange sites on non-fictional sciences, please guide the asker appropriately in comments, including suggesting improvements to the question for that site if necessary.

I'm curious if the imaging equipment the Mars satellites have is powerful enough to deliver that level of detail?

For example they were able to see the rovers, popup tents, rover tracks, even Mark Watney himself.

Is it real or is a just about the only tech inaccuracy Andy Weir allowed in his work?

Since the book refers to "12 satellites in orbit around Mars" (which we don't currently have), and they use the satellites to image each and every landing site to ensure the automated systems are going well before the astronauts land, I would suggest that the imaging technology isn't based on what is currently orbiting Mars but rather an extrapolation of what could be used in the future.

Putting an imaging satellite of such capability in orbit around Mars would be no more difficult than any other satellite around Mars - the imaging tech isn't particularly onerous, as Mars has a less dense atmosphere than Earth it wouldn't have the same requirements as imaging the same resolution would here, as well as the orbits being lower due to the size difference between Mars and Earth.

Edit: I'm in the middle of rereading the book at the moment anyway, and have come across a few additional bits of information and a discrepancy as well.

The additional information is that at least one of the satellites used is called "SuperSurveyor7", a satellite we currently do not have, which indicates that the satellites in place are not of current technology.

The discrepancy is that early on in the book the fact that they could fairly easily identify various things at the Ares 3 landing sight from satellite photos, including the fact that the MDV had been dismantled, the emergency pop tents had been erected and lined up, the solar panels were clean and there was no body on show.

However, later on in the book, they struggle to get anything more than a blurry shot even after the NSA has enhanced the image.

Now that could indicate that not all satellites are equal, but the batch of shots is part of 17 taken during a 10 minute period, which indicates more than one satellite involved. This is the only time they seem to have issue with satellite imagery.

Take a look here: http://www.nasa.gov/jpl/mro/curiosity-tracks-20140109/. These are tracks made by the Curiosity rover (and Curiosity itself) photographed by the Mars Reconnaissance Orbiter which is currently orbiting Mars.

Given that "the Martian" takes place at some realistic point in the future (say the 2030's/2040's), it is absolutely realistic to expect the satellites in that era to be able to image a person.

And even Opportunity, which is a lot smaller, has been photographed by the same camera: 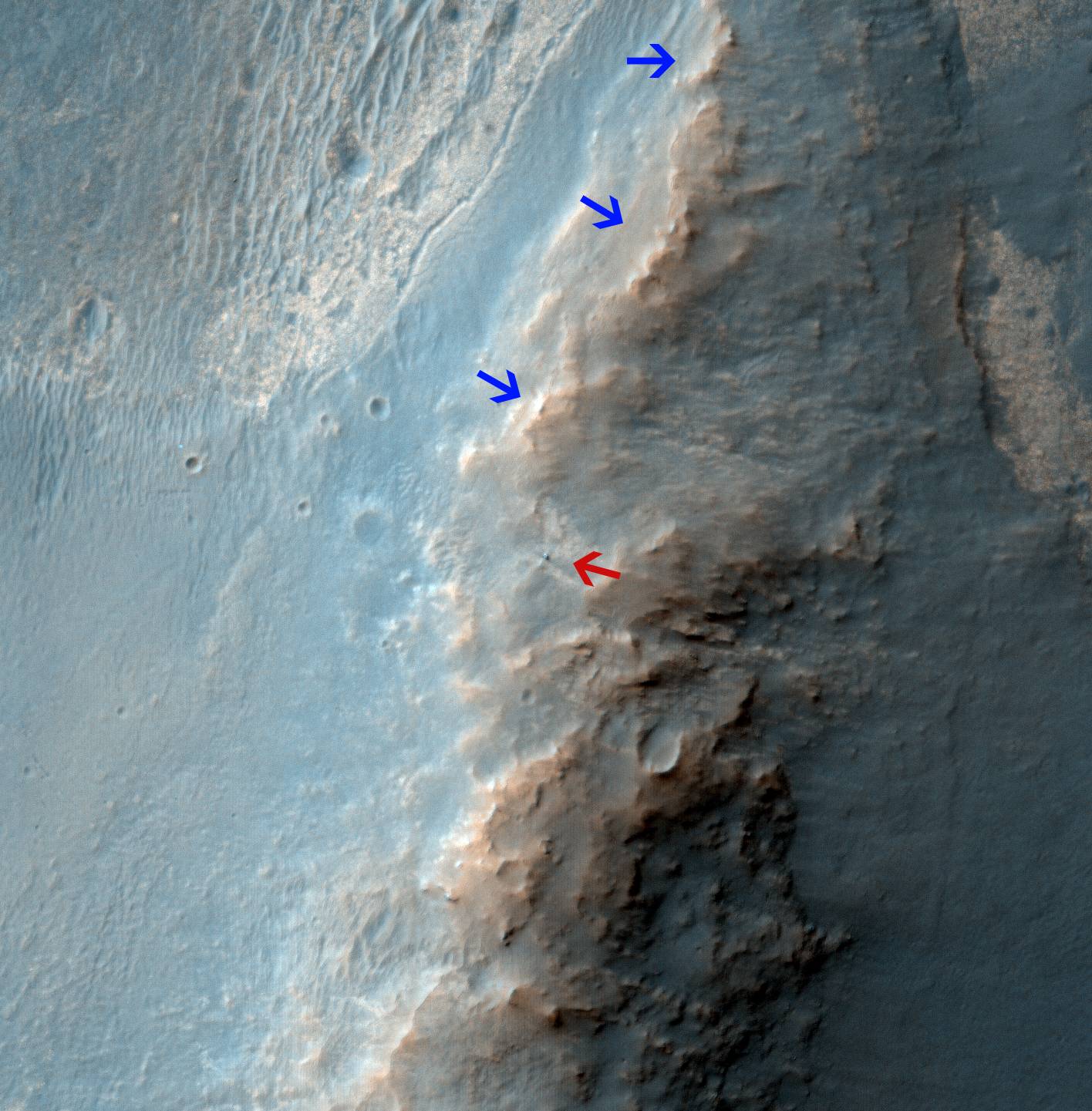 Also, check out this image to get a sense of the scale of the different rovers: 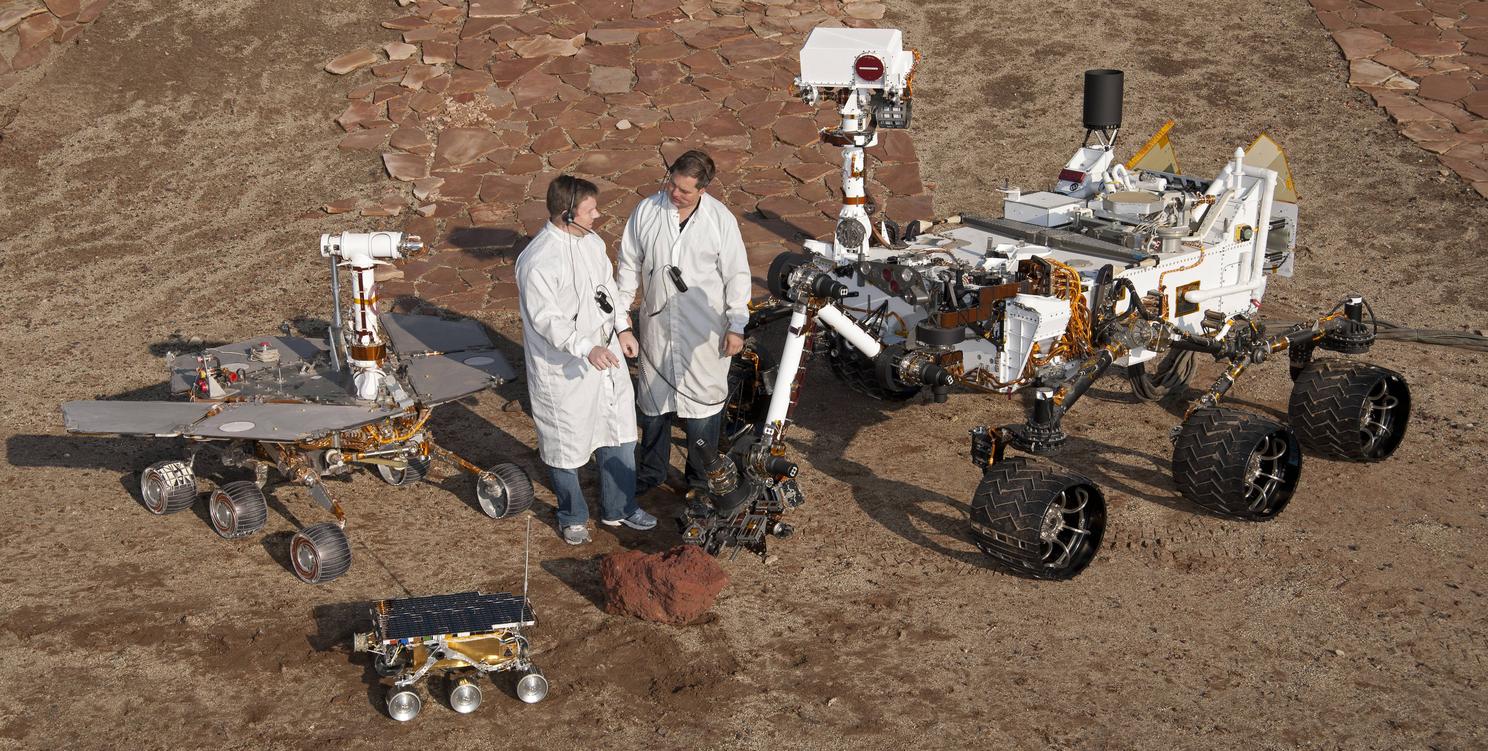 From HiRISE at Univ. of Arizona:

We previously released an image near the Ares 3 landing site from “The Martian” by Andy Weir. Andy then sent us the exact coordinates, which we targeted, and this is it.

The closeup shows some wind-blown deposits inside eroded craters. We can’t see the Ares 3 habitat because it arrives sometime in the future, so this is the “before” image. The dark areas appear bluish in HiRISE color but would appear grey to humans on the surface, or maybe a bit reddish when the air is dusty. Ares 3’s 6-meter-diameter habitat would be just 20 pixels across at this scale, about 1/10th the diameter of the largest crater in the central cluster. If protagonist Mark Watney were laying flat on the surface, he would be 6 pixels tall. 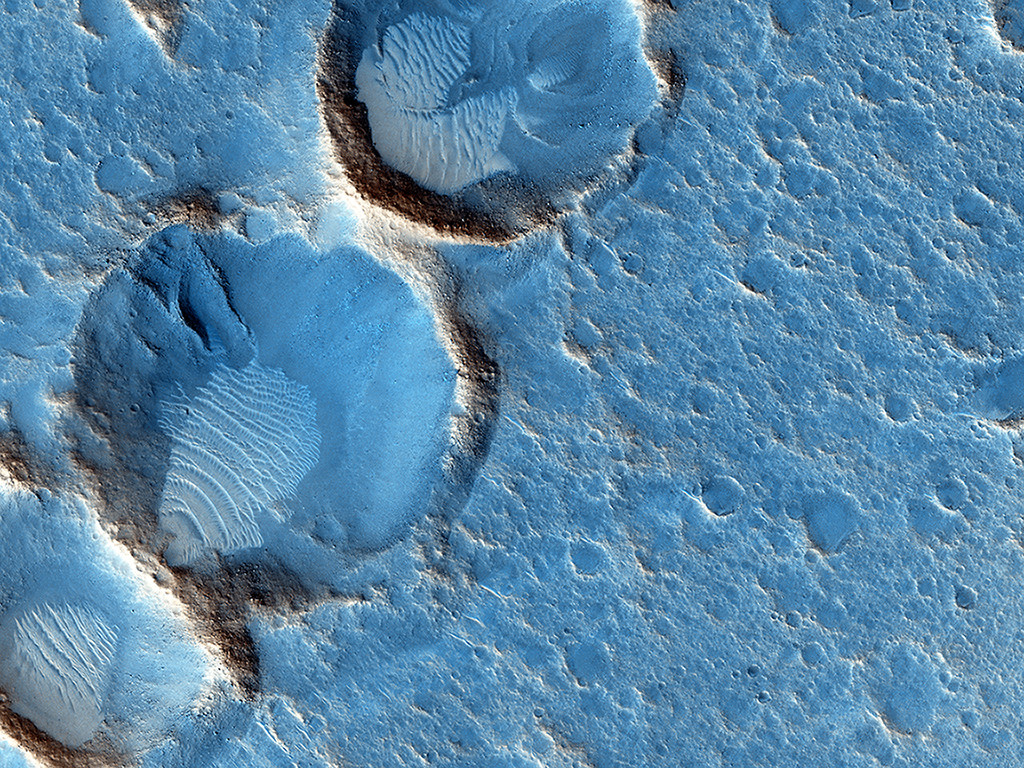 So, to answer your question: Yes, currently active satellites around Mars are able to give some detail near the level of the book (tents, rovers, Mark himself). This can be improved an order of magnitude if existing state-of-the-art technology is used, but to see something on the scale of AREC and signal boulders doesn't need more than two-threefold improvement.

A further note on terrain: Alfred McEwen was quick to notice that Weir was mistaken in passability of Acidalia Planitia and Arabia Terra. Acidalia has many boulder fields (described as flat in the book) while Arabia is much more passable than described in the book if viewed from orbit (one has to get there to be really sure).

There are three major inaccuracies that I've noticed with the book:

You can see satellite images in Google Maps after switching to Satellite View. You can easily see homes, cars and people in satellite view. So, it's not surprising if Mars satellites could capture such details.

The Martian took place in near future. So, the technology should be slightly better, too.

I think its clear that new Sats in orbit would certainly have that capability - given our current spy Sats can read a plates on a car from space.

The biggest scientific bugaboo (i.e. not washing the soil, Weir in next edition can add one sentence saying "after washing the soil to remove..." and take care of it) is the wind that causes the whole problem in the first place. I imagine there are plenty of other ways to die on Mars - heck, an airlock explosion/failure similar to what happened later in the book, would have done it as well.

13
How was MAV fuel plant able to make fuel using hydrogen so quickly in the end?
17
In Andy Weir's "The Martian", is the Ares 3 crew joking about having Johansen eat them?
17
Why no Russian involvement in The Martian?
16
The Martian – what happened to all the video log recordings?
55
Are "The Expanse" and "The Martian" set in the same universe?