What actually happened with the tractor beam in The Voyager Conspiracy?

In the Star Trek: Voyager episode "The Voyager Conspiracy" it is revealed that Seven's predictions are basically a Borg equivalent of information overload. She is putting random facts together into a conspiracy.

However, there's one piece of evidence that seems to have evidence of an actual conspiracy: the tractor beam on the array. 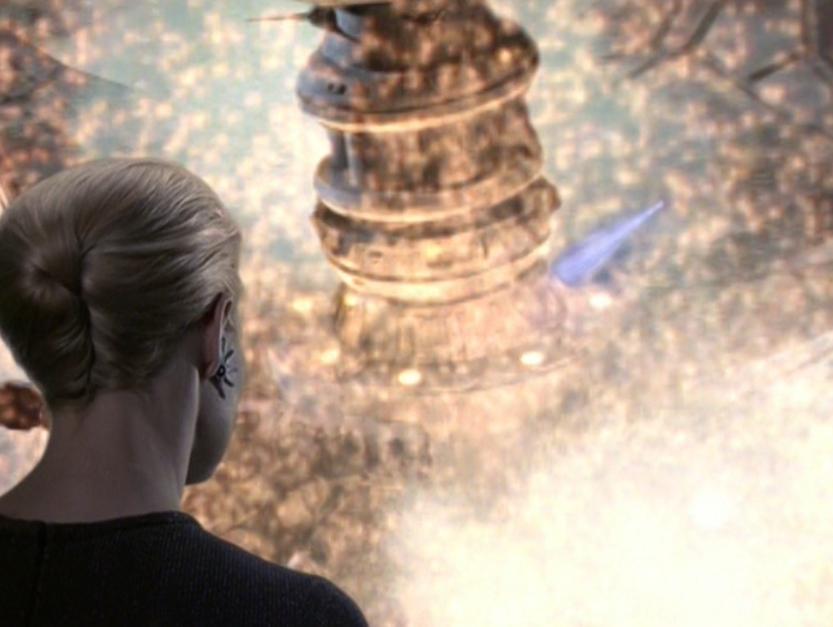 Is it ever explained?

There's no major reason to assume that there was a tractor beam. Both the computer analysis and Tuvok's own interpretation of the sensor data indicate that she's simply jumping at sensor ghosts, seeing patterns where none exist. The "tractor beam" she sees is most likely the by-product of an energetic explosion combined with large amounts of unknown technology:

SEVEN: Is that a tractor beam?

TUVOK: Speculation is not evidence. There was no tractor beam, because there was no ship in the vicinity to generate one, unless you can prove otherwise.

In reality, such abberant pattern matching is known as apophenia, the tendency to see

Seven is suffering from an advanced form of this condition, made worse by her extreme knowledge of cloaking technology:

JANEWAY: You're right, Seven. There is a conspiracy here. But I believe it's a conspiracy of one. I've got a theory of my own. Your modified alcove threw your synaptic patterns into chaos and your mind can't make sense of all the information, so you're generating theory after theory in an attempt to bring order to that chaos.

If you watch the episode while she’s applying “filter after filter” she asks the computer “Computer, what is in that section of the station?” (the section where our “tractor beam” is aimed), Computer responds “that area of the station contains a retry on reactor”. Idk 1-2 coincidences can be dismissed around 3-4 somthings going on. Hell in all her travels and even in tuvoc’s 100 years none of them ever saw a tetryon reactor, except once the care taker aray and then all the sudden along there path of travel is a guy building another device that does the same thing as the aray of the caretaker and uses the exact same super ultra rare reactor that happens to show up right infront of their path. It could have been stored on voyager and ferried ahead via shuttle inorder to plug it into tashes near complete aray for voyagers arrival, most none the wiser. The fact that voyager just so happened to have a special tri cobolt device that no starships ever carry that rips reactor sized pockets in space, she was on a fairly routine mission into the badlands to find rebels no need for somthing like that, that suggest a high up star fleet conspiracy that either Jane way or Tuvac or both were aware of .7of9 was going crazy but just like the photonic fleas it’s not impossible she was right about a couple things, even if she wasn’t and I’m not, all those “coincidences” I just mentioned are far to numerous to connected for there not to have been somthing going on.

17
Why did the tractor beam of the Enterprise crush the fighter jet of 20th century?
12
Which USS Voyager is the real USS Voyager?
16
What genuine references are there in Voltaire’s "U.S.S. Make Shit Up" song?
9
Did Voyager actually trade technology?
14
What exactly happened at the end of Voyager: "Endgame"?
6
What of the time loop in Voyager episode, "Coda"?
4
Tractor beam and Beaming off a ship
31
What really happened to the USS Voyager in "Living Witness"?
16
How old is Tom Paris?