A space-faring human is paid/contracted to integrate with a desert people who are VERY in-touch with the desert - a la Avatar?

I remember the desert people were taller and thinner than humans, used Saracen-style Scimitar swords, had their own alien language, and over the course of the book (books?) integrated this man into their society.

He ultimately went native -- I remember this because he would wear their robes, bathe with sand, and shave all of his body hair.

EDIT: The desert people are used as bodyguard/mercenaries due to their excellent swordsmanship/fighting prowess and their very strict honor/belief system similar to Bushido. They eschew technology, but are exposed to it enough that space travel is a non-issue. The protagonist is also a space/war hero type person and generally considered an adept fighter until he meets the desert people.

I appreciate any pointers!

That would be "The Faded Sun" trilogy by C. J. Cherryh.! 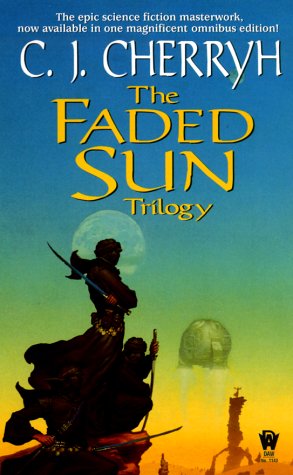 11
Book about space faring race that are very old but use swords and dress in black, also features a matriarchal society
6
Book where character screams 'It burns! It burns!' as they become a female