What is Rocket Raccoon's expected lifespan?

Aw, what the hell, I don't got that long a lifespan anyway.

Typically, a terran raccoon in the wild has an average lifespan of up to three years, or 20 if living in captivity.

Rocket, however, has been genetically modified via implants and experimentation. What is Rocket's life expectancy after having gone through the modifications?

*Note that Marvel Universe's page mentions that Rocket is still alive 10-15,000 in the future, but that no information has been revealed as to how he's alive in that era, having possibly gone through a time warp.

How long Rocket would live if he were not serving as a heavy-weapons specialist in a trouble-seeking band of "Space Avengers" living in a hostile universe is unknown but likely to be shorter than it would be if he were "Rocket Raccoon, Scholarly Librarian." 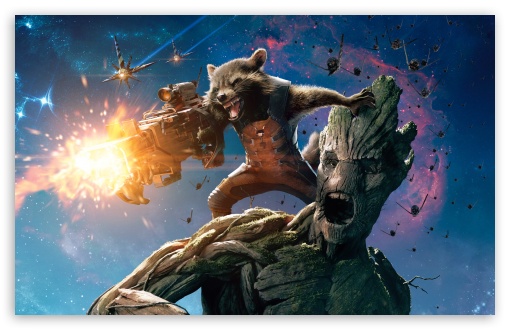 Also See: Why is Rocket Raccoon a Raccoon?

Rocket knows that he is an uplift from a non-sapient species, and he's intelligent enough to realize that non-sapient animals of his size typically don't live long lives.

He isn't aware of what a racoon is earlier in the movie, but may have taken time to research it later (perhaps during flight time?)

Further, he's got many compelling reasons to go with the group at that point - literally every living person he knows and likes is doing it, his best friend is pushing him towards it, and he knows it's the right thing to do. He's just not happy about it, so he expresses himself in a way that says, "Yeah, it's suicide, but I'm going to do it."

Thus, he most likely doesn't know his exact lifespan, but that actually doesn't matter for the quote.

As to his actual lifespan...well, Clark Kent has been in his mid-20s since 1937, so it's probably best to say Rocket will naturally live as long as writers can tell interesting stories about him, or at least milk money from him. So...forever?

Rocket could be basing his own projected lifespan on that of other small animals he may have had contact with. Animals such as foxes, dogs, cats, etc. (or analogues of such species), were probably not unknown to him, considering he was called a fox by Nebula (not to mention, those lizard things).

So ultimately, Rocket wouldn't actually know his own true lifespan, he has nothing to compare it to, and may be driven by the fear of a lifespan shorter than a typical sentient species. This is despite the alterations to his physiology, genetics, along with a much higher developed medical technology than earth, which might result in an indefinite lifespan.

10
Why is Rocket Raccoon a raccoon?

10
Why is Rocket Raccoon a raccoon?
8
What is an "Accuser"?
13
How did Rocket meet Groot?
9
What is the relationship between Yondu and Starlord?
52
How does Rocket understand Groot?
7
What happened to the rest of the animals created with Rocket Raccoon?
15
What caused the conflict between the Kree and the Xandarians?
28
Who created Rocket in the MCU?
14
What is the lifespan of a Flerken?
25
Why does it say "Skywalker" in this shot of Bradley Cooper recording the voice of Rocket Racoon?